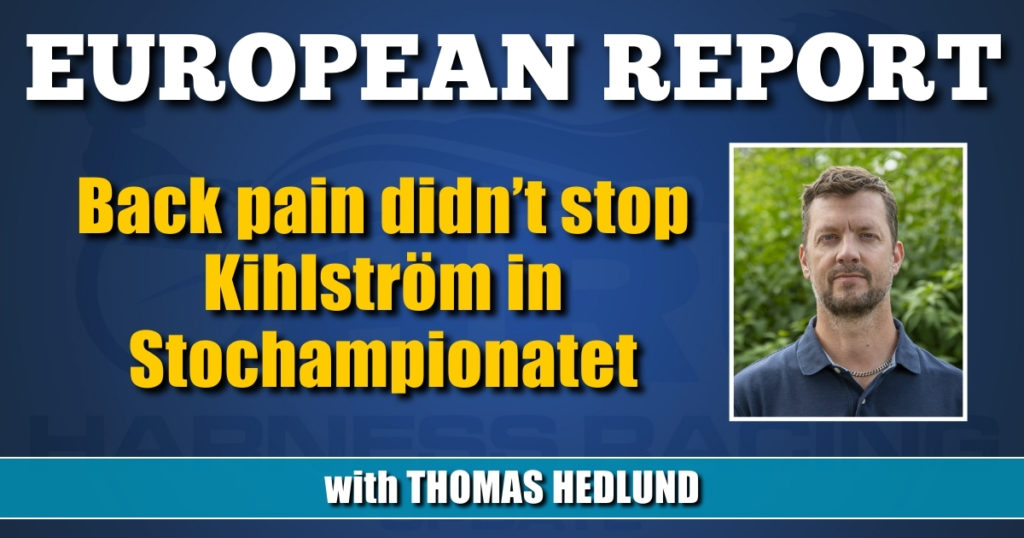 Swedish driver Örjan Kihlström is probably one of the best drivers in the world, when he’s in his best shape.

Last week, Kihlström had to terminate a race with a half-mile to go, when he was placed in a perfect spot in second over with a first choice horse at Solvalla and the fans had a feeling that something was very wrong, either with the horse or the driver. And it turned out that Kihlström suffered from really bad back pain that struck him in the middle of the race at Solvalla. So Kihlström had to resign from drives during the following days and it wasn’t at all certain that he would show up in great shape when $550,000 Stochampionatet was scheduled at Axevalla racetrack on Sunday (July 25) afternoon.

Kihlström resigned from all races except one on Sunday’s race card, opting to sit up behind his 4-year-old trotter Honey Mearas (Readly Express) when the big stakes race was on.

Honey Mearas had finished second in her elimination and struggled with post 11 in the Sunday final, but Kihlström found a nice spot in fourth over at the same time as the front horses Hall Of Am (leader) and Globalizer (first over midway into the race) held high pace. So when Honey Mearas got order to accelerate up the backstretch, Barbro Kronos gave her a cover three wide trip throughout the last turn and when Kihlström asked for some extra speed at the top of the stretch, Honey Mearas exploded and won in a world record performance; mile rate 1:57.1 over 1.6 miles.

Trainer Daniel Redén was moved by his mare’s performance after the race.

“She was just great as runner up in Drottningpokalen in May and I had some sort of a plan with her, a plan that should lead us to Axevalla and this race. But in Rättvik in mid-June, she was not at her best and I got a little confused. Had I been mistaken by her? Had I done something wrong during the summer? She was some percentage better in her elimination for Stochampionatet and then I got confident again, because we had a lot of changes in the equipment to make for the final and we’ve never used ear plugs on her before. I’m shaking right now. I get moved by this little horse because she shows such a great morale, even if she looks much like a ‘normal’ horse when she trains and in the warm up heat,” said Redén, who claimed the trophy in Stochampionatet for the second year in a row. Last year, his Diana Zet won the race.

Barbro Kronos held strongly as second and Eagle Eye Sherry, who followed in Honey Mearas’ back, was third.

Wire to wire for Who’s Who

Kihlström didn’t even have to use the turbo power for keeping the front position from post 1 behind Who’s Who, so the big fight for positions, at least the front positions, never appeared. Who’s Who in front meant that Kihlström was allowed to keep the pace slow when the field turned for the second half of the mile race.

Toughest opponent Very Kronos went off stride in the first turn, which resulted in a undramatic race all the way towards the wire and Who’s Who just cruised to safe win in a moderate 1:53.4 mile.

”I just feel joy after a victory like this and I was very confident with my horse ahead of the race. When Örjan kept the lead and could keep the pace as slow as it turned out, I felt even more confident and I’m so happy right now”, said Aikio after the big triumph.

Who’s Who won the Swedish Derby as a 4-year-old in 2018, at Jägersro, but mile races is not something that is associated with the 7-year-old trotter.

“Today it was urgent that I tested the horse in a little bit faster pace minutes ahead of the race and he has just a fantastic head. I can put in the extra gear and in the next second let him trot slowly and relaxed and he’s totally fine with that”, said Kihlström, who has experienced some nice days at the office after his unintended break from work due to pain in his back.

”Now I’m off duty for three days so I can do some rehabilitation before the V75-races Saturday,” Kihlström told Swedish television after the victory in Hugo Åbergs Memorial.

No drama for Colibri Jet

Alessandro Gocciadoro went to Malmö in southern Sweden and dominated when the $161,000 Breeders Course for 3-year-olds, second division, was on the Tuesday night’s card at Jägersro.

His Colibri Jet (Readly Expres) was first choice among nine opponents and Gocciadoro could send his colt to the lead after a quarter, whereon nothing much happened in the race. Colibri Jet left his challengers in the last turn and won safely in 1:55.1.

But the great impression of Gocciadoro was not set when he reached the wire with Colibri Jet this night. In the race before Breeders Course, the Italian trainer showed up a 4-year-old horse that just flew around the track of Jägersro in a way that few others have done before. Bengurion Jet (Maharajah) came to Jägersro with good reputation after starts mostly in Italy and the performance in 1:50.4 was just astonishing. Bengurion Jet sprinted away in the lead and left the opponents far behind over the stretch. This 4-year-old will most certainly be the one to catch for all track managers around Europe later on this season. And Åby has already attracted Gocciadoro to race the Åby Stora Pris in August, where Bengurion Jet will face older elite trotters over 3.140 meters.