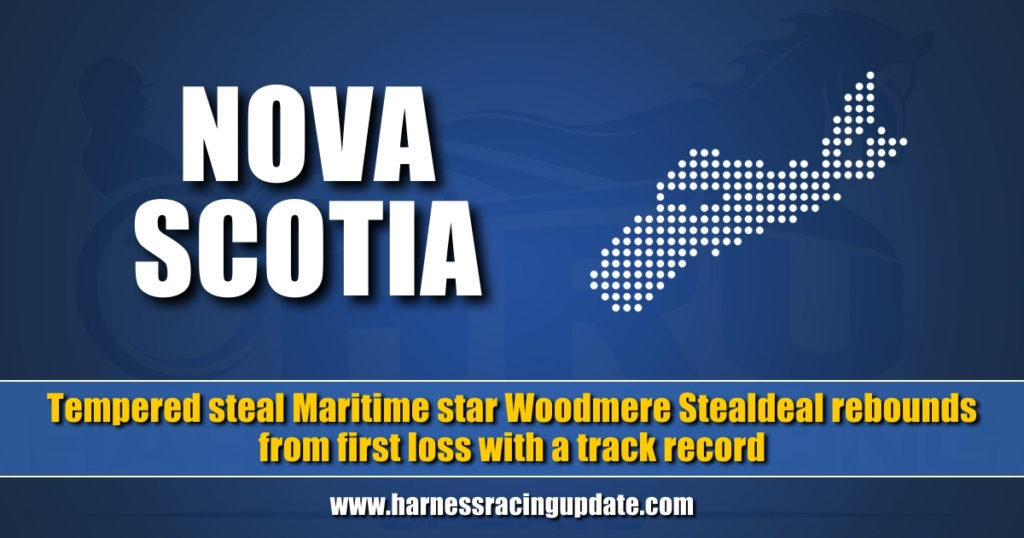 After his perfect record was broken, Maritime star Woodmere Stealdeal rebounded with a track record at Truro Raceway.

When his win streak ended July 10, Woodmere Stealdeal responded like any champion does — he came back stronger. He went a perfect 13-for-13 last year, which made him North America’s second-winningest 2-year-old of either gait. The gelding rewrote divisional records at every Maritime track where he competed in 2020.

Then, in his 2021 comeback, he finished second to Dustylanegoliath and Gillies Barrieau in a $16,400 Atlantic Sires Stakes (ATSS) “A” division for 3-year-old male pacers at Red Shores Summerside. “He wasn’t really tight enough,” said co-owner Robert Sumarah of Halifax, NS, “but I had all the confidence in the world that night. I didn’t get excited. I just let it roll.”

Woodmere Stealdeal and Marc Campbell started from post #6 in the seven-horse field. They instantly pursued early pacesetter Rotten Ronnie (Redmond Doucet Jr.), grabbing the lead by the :28 opening quarter. A two-length advantage didn’t last, however: Woodmere Stealdeal led to the :57.4 half, then “they all came at him because they all want to beat him, which is fine,” Sumarah told HRU. Battling the first-up Dustylanegoliath (Gilles Barrieau) past the three-quarters in 1:26.2, “Stealdeal” came up less than a length short of that rival in the 1:54h mile.

“I wasn’t that disappointed. He went a good race on the Island,” said Sumarah. “The other horse was much tighter and had four more starts.”

Their next Atlantic Sires Stakes match-up was scheduled for July 17 at Truro Raceway, Woodmere Stealdeal and trainer Danny Romo’s home track. Although that card began with a divisional track record-equalling 1:54.1h win by Jadensmagicsteel (Adam Merner) in the first $8,320 ATSS “A” colt division, “Stealdeal’s” connections were confident. “I wasn’t nervous, because I felt that he was right,” said Sumarah, “I just knew he was going to go better than that.”

In race 5, ATSS $3,000 “B” division winner Woodmere Alvin (Corey MacPherson) raised the bar with a going-away 1:53.2h effort — a new track record for 3-year-old pacers. The blazing-fast racing surface and fresh divisional mark might have elevated stress levels for Woodmere Stealdeal’s owners and trainer, if not for one fact: “The pressure was suddenly off, the week before. It was the best thing to ever happen to us,” said Sumarah, referencing the broken win streak.

“He was relaxed, he was himself, and he just wanted to race,” said Sumarah, who shares ownership with Kevin Dorey of Middle Sackville, NS. “He seems motivated when there’s people around.”

For the first time in his racing career, their horse wasn’t sent off as betting favorite.

Marc Campbell timed the gate perfectly, sending Woodmere Stealdeal to the front from post #2. Longshot Elliot Moose (Jason Hughes) pocketed up behind them as the field raced single-file to the :27.2 quarter. Heading to the :55.4 half, Campbell’s horse controlled the pace and PEI giant-slayer Dustylanegoliath (Gilles Barrieau) made his move out of fourth, followed second-over by Rotten Ronnie (Redmond Doucet Jr.). As “Stealdeal” cruised to the three-quarters in 1:24 flat, Dustylanegoliath couldn’t match strides with him; Rotten Ronnie was gapping cover. Elliot Moose who gave chase for place, as Campbell lightly urged “Stealdeal” to the wire.

“I’d be lying if I said I wasn’t going for the track record,” Campbell later said with a grin. He noted differences between the performances at Summerside and Truro: “I knew what we had. He
was a lot calmer in the post parade at Truro, which I was happy about. I scored him down and just kept him cool and calm. I was pretty confident once he made front and he came back to me a little bit; he just wasn’t as aggressive.”

“The track crew obviously had that track in tip-top shape,” said Campbell. After “Stealdeal’s” ATSS victory, he was back in the bike behind 2020 Gold Cup and Saucer champ Time to Dance to claim the all-age Truro track record, a 1:51.3h win in the pacer’s second-consecutive Lindsay Construction Cup Invitational.

Woodmere Stealdeal and his “A” division competition are back in action at Northside Downs July 24. “I told the owners Saturday night, on my way out of Truro, that I’d be there. I’ll stick with him, for sure,” said catch driver Campbell. “I know the owners pretty good. I’ve had horses for Bob Sumarah and I’ve driven for Danny [Romo] off and on for a couple of years. So I’ll stick with ‘Stealdeal.’ He’s definitely worth sticking with.”

Even with the 2020 Maritime Horse of the Year back in the winner’s circle, Campbell cautioned against underestimating rivals. “There’s a great group of colts out there. It’s not going to be a walk in the park — it’s going to be a dogfight every week.”

He said “Stealdeal” remains among the best young horses he’s driven, from manners to gait.

“He has a very efficient gait. He travels the ground very light,” said the PEI-based horseman. “He just covers the ground really easily.”

There was a sense of recalibration after Woodmere Stealdeal’s first defeat. His season had been slow to start: COVID-19 regulations affected race dates; he had to requalify after going momentarily off-stride behind a slow Truro starting gate June 13. After his latest victory, a cooled-out and cross-tied “Stealdeal” enjoyed attention and treats from children, including Campbell’s.

Summerside was just a turning point for the charismatic gelding.

“Was I disappointed? Yeah,” said Campbell. “But was it the end of the world? Obviously not.”