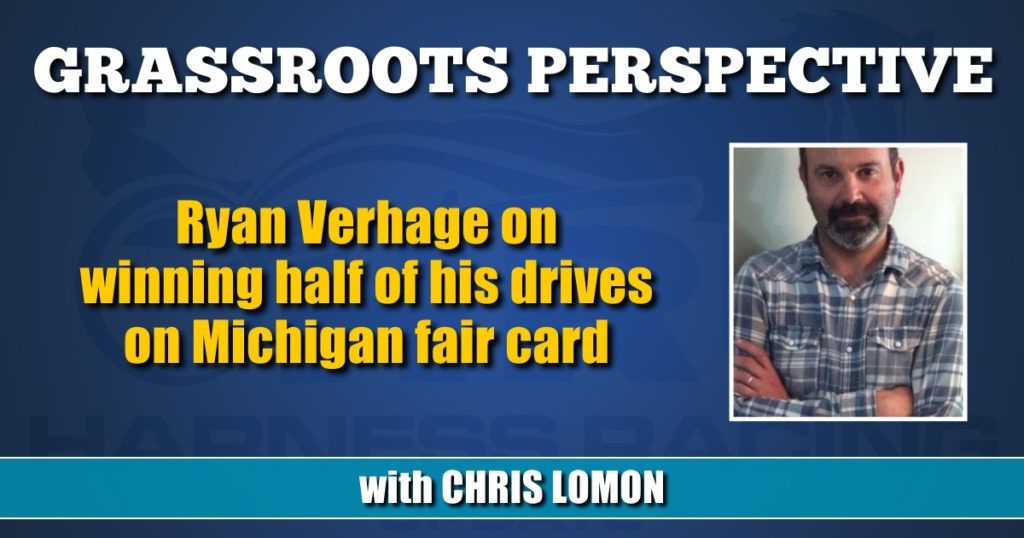 It was a day that produced a somewhat irritating loss for Ryan Verhage, but also four big wins.

The afternoon of July 15 was a memorable one, at least on the racetrack, for the 30-year-old driver/trainer from Michigan.

At the end of the racing card at Big Rapids, a fair circuit track about a three-hour drive northwest of Detroit, Verhage had won half of his eight drives, along with a second, third, fourth and seventh.

The majority of those results offset an off-track loss, specifically, the misplacing of his cell phone.

“Life is pretty good,” said Verhage, with a laugh. “I left my phone on the bed of my truck and drove off, so I had to end up getting a new one. Winning those four races was definitely the best part of the day.”

The best part of his standardbred career came in 2018, the year he started driving and training.

It was something he had long hoped for.

“My uncle, Joe Seekman, he had a big stable and I used to go out on the weekends and visit him and my cousins, Travis and Jared. I started jogging there and training, and I just fell in love with it. Joe has been a big part of my life and still is to this day. He always has a bunch of horses, so I go down and help him and visit. That’s it right there, the love of the game for me.”

As for his driving colors, Verhage drew inspiration from a reinsman who is closing in on 8,900 career wins, a veteran who produced a career high 721 wins in 2009.

“Jason Bartlett, I kind of went off his [colors]. When I was living in New York, I was always around Jason. He loved playing basketball and we played basketball a lot. He’s a great guy. So, I went off his design. Some day, I’d like to be like him. He’s one of the best half-mile drivers out there.”

A solid rookie campaign by Verhage, one that yielded 25 training triumphs and 19 victories in the race bike, was followed by even more success in his sophomore season.

After enduring a tougher third year, he has responded with a strong 2021 campaign, posting solid numbers on both his driving and training stat sheets.

While he’s endured his fair share of ups and downs, career wise, there is one particular aspect of his horse racing life that has remained a constant.

“I hoping things get better here in Michigan over the next few years. There have been some tough times in recent years, but I’m doing my best to be patient and to be optimistic about the future of racing in the state, mostly because I love Michigan and stay here. We don’t go for much money – I could go out east or somewhere else – but I’d rather stay here. Hopefully, it gets better in the next few years.

“I see the money going up a little bit, but it feels like it’s taking forever. All my horses are half-mile horses and they suit the tracks here. We also have great horsepeople in Michigan, who have decided to stay here. Hopefully, they stayed here to see it get better.”

Verhage currently has four horses in his stable, owning shares in all of them.

Simply adding a horse, here and there, to his stable isn’t his goal.

“I think it all comes down to finding the right horse for your program and I’ve been very lucky that way. I like to claim a lot of horses out of Northfield. Lately, I’ve been working hard to find the horses that are the best fit for me. When I claim, it’s not just about adding numbers to my barn. It has to be about that right fit.”

He’s learned something from every pacer or trotter that’s come through his barn over the years.

High Flying Sara, a bay daughter of Jeremes Jet (ON), may have provided Verhage with the biggest education – and challenge – he’s received to date.

Bred by Andray Farm in Punxsutawney, PA, the pacing miss, originally a $16,000 purchase at the 2012 Standardbred Horse Sales Company’s yearling sale in Harrisburg, PA, was a wild child on the racetrack, at least in any scenario outside of an actual race.

“She’s not the easiest horse to be around. She can’t jog, really. She’s out of control, but she’s really helped me over the last few years of having her. Now, she’s a broodmare. You’ll never get a horse that’s the same and for me, it’s a big plus.”

Verhage was a part of history with another horse, T Red.

Last August at Western Michigan Fair in Ludington, he drove the 14-year old gelding to his 100th career win, the milestone an open-length victory.

It remains one of Verhage’s biggest highlights to date.

“Winning with T Red, I’m pretty proud of that. I was also really happy to win a Michigan Sires Stakes [3-Year-Old Filly Pace, last September at Northville Downs] with Meggie May I. She wasn’t an easy horse to drive, so that was a special win too. It would be nice to have more wins like that. It’s what you always push yourself for, to get those chances to drive and train nice horses.”

When he’s not in the sulky, Verhage is very much the prototypical family man, relishing any opportunity to spend time with his three sons, Lucas, Emmett and Hunter.

They’ve all taken a shine to the horses.

“It’s great to see them spending time and enjoying the horses. It’s nice to have that time together. And when I’m not busy in Michigan, I’ll head to Indiana to hang out with Travis and Jared. Really, I just enjoy everything to do with family.”

When it comes to his racing, Verhage is determined to stay put in Michigan, eager to see the industry’s fortunes take a turn for the better.

He knows that won’t happen overnight, but he’s buoyed by the passion of horsepeople throughout the Wolverine State, a group that includes Verhage.

“Personally, I want to keep pushing forward and have a decent stable. My long-term goal is to keep everything, my life and my career, happy. I’m fighting for racing in Michigan and I want to see it succeed and get better from the way it is now.”