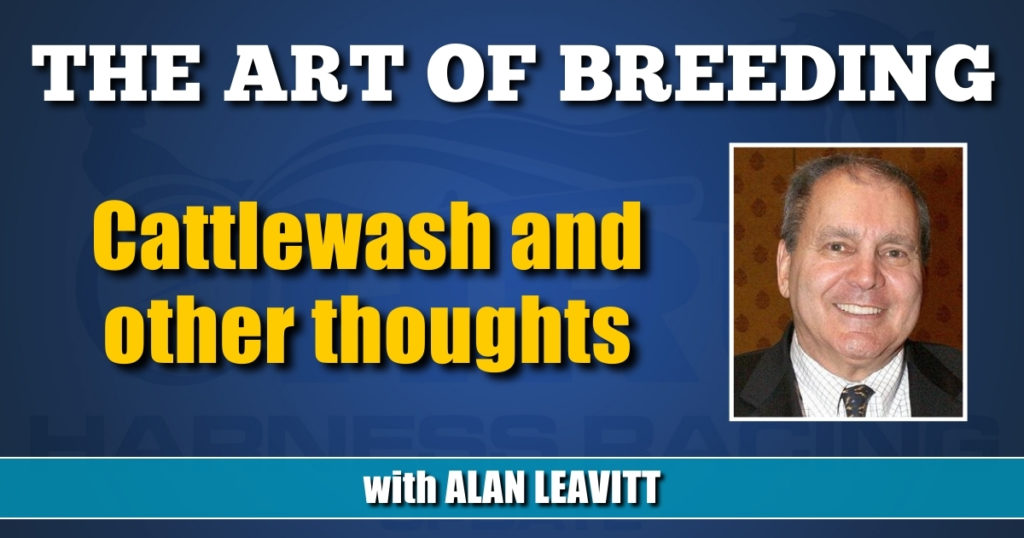 Cattlewash caught my eye again on Saturday night (July 10) when he won the $250,000 Graduate Series Final. I admit I’m fascinated by his name, which derives from the name of a famous beach in Barbados, perfect for a son of Somebeachsomewhere.

But far beyond his name, Cattlewash is proving that a horse can stand for a full breeding season and then come back and race successfully. Other horses have both bred and raced in the same year, but it’s still the exception here in North America. In Europe, however, it happens all the time, and frequently with success in both endeavors. Obviously, the Europeans have mastered the logistics a dual career entails.

Not so obviously here, but in the case of Cattlewash, his owner Bill Donovan, and his trainer, Ron Burke, were able to master the details. (Which leads me to a non-sequitur, i.e. the definition of genius — the ability to master infinite detail).

All of which led this kid to take a look at Cattlewash’s pedigree. Turns out he’s inbred 3 by 3, to Matt’s Scooter, which may have something to do with his obvious racing ability. Which, if you remember, is the horse’s phenotype, which is the visible horse. What we can’t see is Cattlewash’s genotype, which is his genetic makeup, and will determine, for better or worse, his ability as a sire.

I’m not here to write an ad for Cattlewash, or any other stud, but as an objective observance, that double cross up close to Matt’s Scooter could be meaningful to him as a sire. RE: his pedigree, he’s also linebred, 4 by 4, to Cam Fella, who was one of the very few true sires of sires.

Further back, in the fifth generation, and too far back to have any real significance, both Meadow Skipper and Most Happy Fella each appear three times. And at the very bottom of the fifth generation is the mare Scotch Jewel. Today her name means “nothin’ to nobody”, as we say in the hills of Kentucky.

But long ago, the first 2:00 horse this kid ever raced, Tiger Lily Lobell p,2,T1:59.3, battled it out week after week in the pacing filly stakes with Scotch Jewel. She was owned by Castleton Farm, and trained and driven by Ralph Baldwin. How appropriate that she is the fourth dam of a world champion in Cattlewash.

That brings me to the first standardbred who ever appeared in my life, a little brown mare named Jean Scott. This happened when I was 11. Although I still was showing my walk-trot pony, Smooth Sailin’; I had that year graduated to a full-sized, three-gaited horse, Dipsy Doodle, He doubled as both my equitation horse as well as my mount in the open amatuer (am-at-er) classes. If he’d had a little more front action we’d have been more successful in the classes where he was judged, as opposed to the horsemanship classes where I was.

In those days, in central Pennsylvania where I lived, every wide place in the road put on a least a one day horse show, and every show included a class for roadsters under saddle.

Jean Scott was a little standardbred mare, probably 15 hands at most, owned by Red and Ma Ziegler, who operated a bar in York, PA. Jean Scott was broke to ride, and at the age of 11 I was enlisted to ride her in the under saddle classes. The obvious thought being, a little rider was perfect for a little mare, and this kid certainly fit that bill.

There was only one hitch in the Ziegler’s plans for me and their little mare. Although she was on the small side, she took a good hold of the bit. That wouldn’t have been a problem for any grown man, but it was one hell of a problem for me.

The classes at those local shows all went the same way; we jogged in going the wrong way of the ring, then after several times around the announcer would call for a road gait, which was faster than a jog but slower than full out.

Then we’d be reversed to go the right way of the ring. But after we’d jogged and road gaited around the show ring, the announcer would tell us to “Let em’ trot!”

My only problem was that by the time we were going full tilt, I was long out of arms. So little Jean Scott was on her own, trotting her heart out, with me just a fast posting passenger. Then we’d be told to pull up and come to the center and line-up. Which everyone in the class did except me, because there was no way I could pull my horse up.

So we’d circle the ring at least three or four more times before Jean Scott took pity on me and pulled herself up. And every time that happened, the announcer, who was the same guy at every little show, would give the same spiel: “Look at that kid go! He’s havin’ so much fun, he don’t want to stop!”

It’s been a long time since I graduated in the Great Andover Class of ’54, as we like to think of ourselves. Last year we lost 10 classmates, so occasional thoughts of our mortality, for those of us still here, are inevitable.

For me, as an indulgence, I like to imagine waking up, as if from a dream. There’s a little brown road mare all tacked up, stamping her foot impatiently as she waits for me to grab a stirrup and swing up so she can take off as fast as horses trot. And if she’s there, I’ll know it’s heaven.