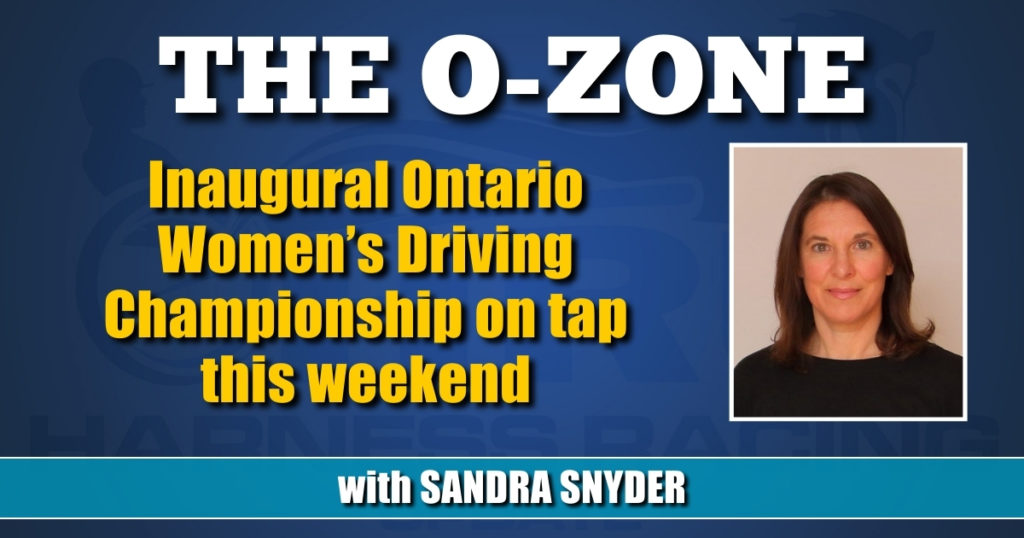 “It’s just fantastic to help raise the profile of women in the sport. Not just for women, to empower other girls and younger girls, but also for the men, to let them see that we can do this too,” said Maggie Jones.

With less than 36 hours remaining before the first leg of the OLG Ontario Women’s Driving Championship gets under way at Hanover Raceway, Maggie Jones and Julie Walker will be spending their spare time watching replays of their assigned horses and tamping down their excitement about the inaugural event.

“I was thrilled to be invited and I am really, really excited. I think it’s going to be a really fun weekend and I am looking forward to it,” said Jones. “I’ve looked at the entries, I’ve looked at the horse’s lines, I’ll probably watch some replays and I will be peppering the trainers with questions when we get there for sure. No one knows their horses better than the trainers so hopefully they can give me some good pointers.”

Jones, who lives in Barrie, ON, teaches in the science department at Georgian College during the academic year and works alongside her husband Keith Jones through the summer, dedicating extra energy to her 10-year-old Muscle Mass gelding Mystery Bet. Jones drives — or rides, she and the gelding are qualified Racing Under Saddle (RUS) competitors — Mystery Bet in all of his races, but that has only amounted to four starts this year so she is really looking forward to climbing into a race bike in five straight races on both Saturday and Sunday. The second leg of the driving championship goes postward at Dresden Raceway on Sunday, July 18.

Walker said shifting her mentality from that of a trainer to a driver is something she is focussing on heading into the event. The Owen Sound native is a full-time trainer based in Carlisle, ON who learned her trade alongside parents Paul and Brenda Walker and, like them, concentrates on developing trotters.

“Strategy-wise — we were talking about this (Wednesday) — I have to get the mentality of driving like a driver and not a trainer, so that’s different for me,” said Walker. “I always try to go in prepared. I’ll watch some replays of the horses. Of course, when we’re driving trotters, a lot of them I know, I watch them all the time. I don’t watch a lot of pacing races, so now I have to do a little bit more homework, watching some replays and seeing what the horse is like.

“Me and Britt Kennedy were really hoping that we’d get at least one trotter race at Dresden or Hanover, but no, it looks like we’re going to have all pacers. I don’t mind. The last few years with the amateur races and then the women’s driving thing they had up in Ottawa (in 2018) it was all pacers and it was actually kind of fun.”

In addition to Jones and Walker, the Ontario Women’s Driving Championship features Marie-Claude Auger of Trois-Rivieres, QC, Natasha Day of Cambridge, ON, Marielle Enberg of Guelph, ON, Pam Forgie of Goderich, ON, Britt Kennedy of Ingersoll, ON and Andrea Leon of Maidstone, ON.

While Jones and Walker do the bulk of their driving behind horses they own and train, Auger and Day ply their trade full-time on the Ontario and Quebec circuits. Day is a regular at Hanover Raceway and the native of Australia expects that to work in her favour when the gate swings open Saturday.

“Strategy is going to be a big thing for the weekend. You mightn’t have the best horse in the race, but it’s going to be all strategically played as far as how it will all turn out.”

Win, lose or draw all three women are looking forward to the camaraderie of spending the weekend with their fellow drivers.

On Saturday, the women will be donating their purse earnings to the Canadian Cancer Society for Cervical Cancer and Hanover Raceway is supplementing that effort with an online auction (https://www.32auctions.com/Hanover2021 until July 17 at 6 pm). On Sunday, the fundraising will be dedicated to Harness The Hope, which dedicates its efforts to breast cancer awareness, research and support.

The driving championship was spearheaded by Hanover Raceway’s general manager Steve Fitzsimmons. Fitzsimmons floated the idea at a Grassroots track symposium last fall and Dresden Raceway’s Gary Patterson and Ontario Racing’s Jonathan Zammit were quick to get on board as co-hosts and sponsors. Fitzsimmons then approached the OLG, who signed on as the title sponsor of the two-day event.

For her part, Walker is grateful to the team at what she still considers her hometown track for their efforts to create a unique event to both showcase Ontario’s female drivers and raise awareness about cervical and breast cancer.

“I was definitely excited for Hanover Raceway to be able to put on an event like that, for going above and beyond when it comes to horse racing. It’s nice to see, during the pandemic and everything that’s been going on, that there are some different events going to happen and to be a part of it, it’s nice,” said Walker. “And in this case of course we’re bringing awareness to cancer as well, which for some people hits home a lot harder than other people.”

Programs and a live stream for Saturday’s leg are available at https://www.hanoverraceway.com/ and details about Sunday’s leg can be found at http://dresdenraceway.ca/.