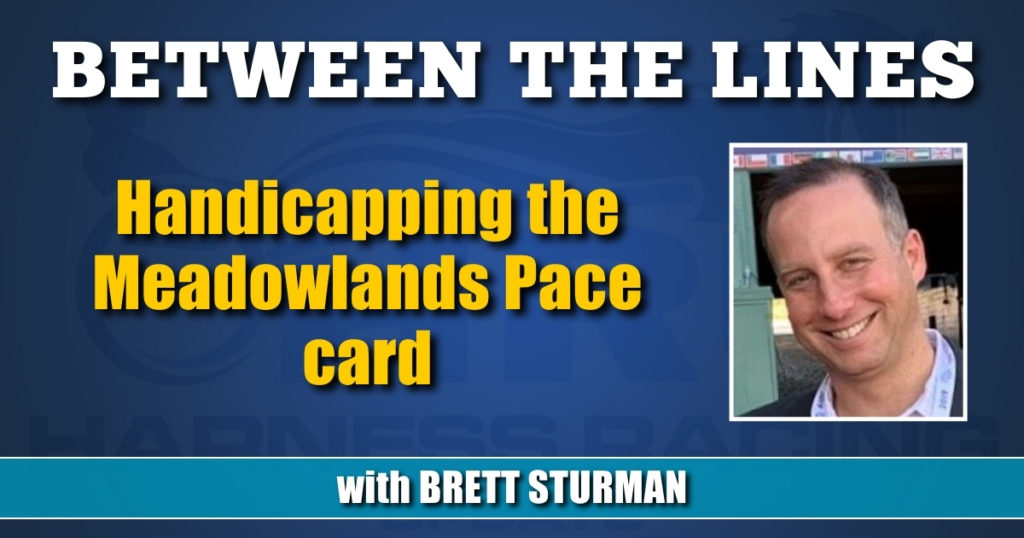 My picks for Saturday’s (July 17) rich stakes card at The Meadowlands.

DONNA SOPRANO fought on gamely through the stretch last out when she fended off an early pocket pull from BELTASSIMA in losing ultimately to only the 3-5 favorite. Mohawk Million runner-up from last year goes for a sharp barn when they come to the Meadowlands. BELTASSIMA rebounded last week in the Reynolds to reach off a second-over trip following a period in the race where she was briefly three-wide; New Jersey Sires Stakes (NJSS) champ was perhaps a bit overused two back. ALTAR was last year’s NJSS champion at 2 and is new to Takter’s barn this year. That qualifier against Ramona Hill was an improvement and is more than capable if they’ve figured out the June breaking problems. FLAWLESS COUNTRY was just fair last out. After not being worse than second in 9 starts last year she’s been no better than third in 4 starts this year.

DANCINGINTHEDARK M brushed to the lead past the quarter in a driving rainstorm last week and never looked back. Tetrick chased after him a bit towards the end of that mile but it didn’t look like the outcome was ever in serious doubt; looks to control it once again starting from the rail. TAKE ALL COMERS was used early before being forced to yield and gave game chase through the stretch while being miles clear of everyone else; not out of the question as the main threat to the favorite. ZENITH STRIDE somehow shocked here last year but hasn’t been able to replicate that since; gave way last week from the pocket. BROOKVIEW BOLT has gone some big miles at Indiana over the past couple of seasons; comes East for Burke as the only horse in here not Hambletonian-eligible.

DARLENE HANOVER was strong here last week when racing first-over and a similar try would give her an honest chance against these. Like many others here, she’s trying to work her way back into last year’s freshmen form. LADY CHAOS is an extremely consistent type and brings class with her; one more inch and she would have had second two back and exits a game try on the front. HOT AS HILL also was brave on the front last week but now moves to the outside. YOU ATO DREAM couldn’t get involved last out from post 10 but she’s better than that; will be more prominent here at a price. ITERATION has banked a lot in her career in New York; MAZZARATI’s best would give her an upset chance.

The HOT MESS EXPRESS rolls into the Meadowlands for her local debut, though she did qualify here to be second to Perfect Sting in early June. A standout in Indiana, she beat open company including the PA-sired GRACE HILL last out in the Nadia Lobell to run her unbeaten streak to five on the year. GRACE HILL wasn’t bad to be second to the fast Test Of Faith here two back and then closed well enough up the inside once the passing lane became available last out at Hoosier; may only need a clearer shot early. Last year’s Dan Patch champ FIRE START HANOVER looks to get things on track. For what it’s worth Dunn chose this one over #4. NOTORIOUS PINK put up a monster qualifier two back but it didn’t translate in an actual race last out. BLUE DIAMOND EYES and CONTINUALOU will both offer prices for Burke; the latter is better than her last two races show.

This is the lowest purse of any stakes offered on the night but renews the MANCHEGO and ATLANTA rivalry for the fifth year. MANCHEGO comes off a surprising loss in the Crawford Farms but I guess what do you expect having to come first over into a :56.3 half. Gingras was quoted last week as saying that ATLANTA has never been better, and she’s simply mowed them down with a relentless grind in each of her two races this year. WHEN DOVESCRY continues to get away with kindly rating on the front end but hasn’t had enough to stave off Atlanta, an obvious part of the mix once again. WESLYNN QUEST closed willingly last out and it came on the barn change to Engblom; capable of speed if McCarthy wants it.

LYONS SENTINEL brushed and took them all the way two weeks ago in a lifetime best 1:48 mile. She’s definitely the “best” of these but will need to overcome post 10; hard to believe she was 20-1 five back from a similar position. GIA’S SURREAL took a first-over run at the big favorite last week in her first start over the track and did well for herself to sustain and hold second. With the posts now reversed so could the order of finish; issue though is a far shorter price. PEAKY SNEAKY tried a wide move last out from an impossible spot. Seems due to show something though I’m somewhat surprised that Gingras opted instead for WARRAWEE UBEAUT. I thought that KEEP ROCKIN A would have been better last out and never got involved; at least the price will be enticing should she fire. JK FIRST LADY saved ground last out and had late pace once angled late. HEN PARTY is talented but makes her first start since November.

Like most races on this card, what a competitive bunch this is. ANGERS BAYAMA is one of a few here in raging form. After flying two back with that amazing last quarter, he almost lasted in the Roll With Joe despite facing heavy pressure on the front through fast fractions. His morning line of 6-1 seems about reasonable though a few ticks higher would be even better. BACKSTREET SHADOW came with an ill-fated try for the front last out and in the process was dueled into defeat along with STARS ALIGN A; prior to that the former won in 1:47.3. RUTHLESS HANOVER broke stride last out as the favorite in the $250,000 Graduate; looks like he got jammed up a bit when that happened. All races prior to that are excellent. CENTURY FARROH raced well last out in his return to the Meadowlands, showing speed and then clearly moving fastest of all late. CATCH THE FIRE is doing well with his dual racing and breeding; invades from Scioto in career best form though this will be a tall task.

READY FOR MONI finally got the better of IT’S ACADEMIC last week and it took a second-over trip to get the job done. That was a nice drive that Tetrick worked out from post 8 and the $15 win price was a solid overlay. Can certainly win again though he’ll have to overcome the second-tier in a 12-horse field. Also in the second-tier is chief rival IT’S ACADEMIC. He’s raced exclusively on the front in all his recent races but I suspect he doesn’t have to be there to win. RAMONA HILL qualified well following a rare miscue at the start in the Joie De Vie; a bit of a wild card but can jump up and win this if on her game. Fellow 4-year-old mare HYPNOTIC AM was brave last out in wearing down It’s Academic only to lose to the tripped out Ready For Moni; another that would be no shock and it’s interesting that the morning line favors the horses over the mares. BEADS threw in a puzzler last out. He broke in the stretch but he was gapped off cover almost the entire race prior to that; would need a total bounce back. NEXT LEVEL STUFF has won the last two times she drew the rail; can grab a share.

For as unusual as last week’s eliminations were in terms of the respective impossible and less than likely results, both of which came off largely single-file racing, they raised more questions than answers heading into the Pace final. Sears won this race in 2019 with Best In Show and I’ll take an upset stab with CHASE H HANOVER in a race that’s really up for grabs. Fast last year at 2, he could be rounding into his better form right now. Following a first-over attempt in the Messenger final, he had a lot of pace last week when Sears took him to the inside only to get caught behind a tiring leader and then having to angle again for a seam. ONE EIGHT HUNDRED was a surprise last week. He had it his own way on the front and you could tell he was in trouble the way the CHARLIE MAY took it to him around the final turn, maybe it was just the sloppy going? SOUTHWIND GENDRY was allowed to be left alone on the lead last week in his elimination and he made them pay, lasting all the way in 1:49.1 as a 10-1 upsetter. 2-year-old champ PERFECT STING did all he could do last week by closing in :25.1, only asked to pace for his final quarter. No issue in that circumstance of not being able to get to the race winner but he was still held off for second by LAWLESS SHADOW, who outraced his odds coming into his elimination from Canada. AMERICAN COURAGE was all the rage and rightfully so, but he didn’t seem at his best either last week and now moves all the way out to post 10. At least will offer a square price. CHARLIE MAY has raced so well in all his recent East coast starts and it’s too bad he doesn’t yet have a win to show for it; would have to think Brett Miller will be sending him early. HELLABALOU pulled off the 80-1 shocker in his elimination last week when changing back to McCarthy and getting the trip. He did outsprint the top two late, so you have to give him credit for that.

In another highly competitive division of the William Haughton, WORKIN ONA MYSTERY was far more ready than I thought he’d be last out. When making his first start back at the Meadowlands just his 13th over the past two seasons, he showed a ton of early speed, encountered stretch traffic and squeezed through a seam too late in the shadow of the wire. The Brian Brown trainee can win. THIS IS THE PLAN rates as the programmed favorite but he needed every inch of that perfect trip to get up in the Roll With Joe. That’s not to say he can’t win again but the price may be too short to try. CATTLEWASH was impressive last week in the Graduate final leaving into a hot pace and then somehow being able to track down the pocket sitter when it didn’t look like he was going to reach with 100 yards to go. LEONIDAS A makes his second start for Gregory and moves to the big track; possible price play. SHAKE THAT HOUSE is known for some big miles from time to time and he was well respected at the windows against similar two back; will now be overlooked but is a possibility. CHIEF MATE had solid late pace last out and a possible bomb if the race sets up for him.

Last year’s 2-year-old division winner VENERATE rebounded last week at the Meadowlands following a break two back to win impressively in the off-going with a :26.3 final quarter. SONOFAMISTERY almost lasted on the front end in his most recent, but he was going to be beaten by VENERATE regardless of that break at the wire. That said, he still brings a lot of speed with him. ON A STREAK won last year’s Breeders Crown but hasn’t come back as fast yet this year. CUATRO DE JULIO showed a load of talent last year; in the process of piecing it together this year in hopes of Hambletonian like many of these. CAPTAIN COREY dominated PASS foes two back and would have done so again if not for the recent break; gets tested once again with these types. RATTLE MY CAGE steps up.