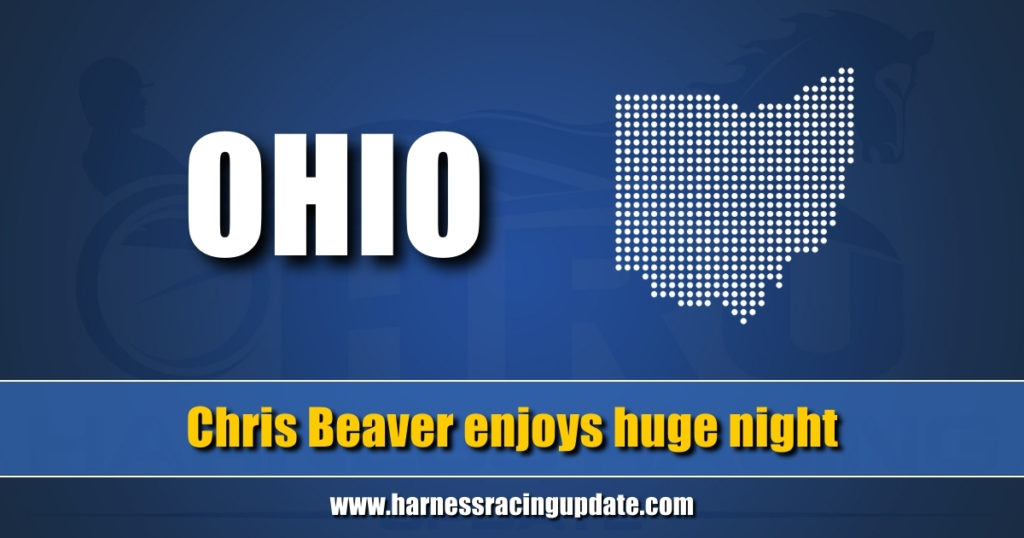 The Radnor, OH-based trainer captured five of the eight $40,000 Ohio Sire Stakes (OHSS) divisions of the 2-year-old trots last Friday (July 9) at Eldorado Scioto Downs and rounded out his evening with a sixth win in a $17,000 conditioned trot.

His record night started early when his homebred Caviar Gold (Brett Miller) used a perfect pocket trip to score a 1 ¼ length win in 1:58.3 in the evening’s first race.

“I told Bret not to put him on the front because he was trying to pull up a little bit warming up. I put a Murphy (blind) on the outside,” said Beaver. “This horse seems very talented. Brett said it was basically a training mile for him.”

Jay Wolf | Trainer Chris Beaver is on fire in Ohio.

The second win of the night was collected in the fifth race with Gabbys C Note (Brett Miller) by 5 ¾ lengths in 1:58.1.

Gabbys C Note came into the first OHSS leg off a pair of qualifying wins at the Delaware County Fairgrounds.

He was bred and co-owned by Chris’ mother, Johanna Beaver, who shares ownership with her son and Zeehandelar.

“She’s a really nice filly. It took a long time to get her gaited. She couldn’t trot in 2:40 until April,” said the 49-year-old trainer. “Once she got it figured out, she’s become really determined and gritty.”

The Beaver Stable was right back in the Eldorado Scioto Downs winner’s circle in race #6 with Caviar Roxie Due.

Caviar Roxie Due was a $14,000 yearling purchase at the Ohio Select Sale from the Dublin Valley Farm consignment. She is owned by Beaver, Zeehandelar, VIP Internet Stable and Tim Homan.

“She’s one that I didn’t think would make it through the middle of the winter,” said Beaver. “She was real sore, but she’s matured and got it all together and is good gaited now.”

Despite winning three stakes races on the card, the bettors sent Gabbys Bit Coin off at odds of 15-1 in the seventh race.

Ronnie Wrenn, Jr. sat calmly behind the Uncle Peter gelding and sprinted past the favorite to win in 1:59.

“He’s a real natural – trained well all along,” said Beaver, who co-owns him with his mother, who bred.

Stephanie Hill (Aaron Merriman) made it four straight wins for Team Beaver in the eighth race.

“She’s good mannered. I can’t fault her in anyway. She’s got lots of quick speed and was driven really well by Aaron.”

She is owned in part by Moger-Delia Racing.

The memorable night wrapped up with a conditioned trot win by Winning Ticket (Aaron Merriman) in 1:56.1.

The sophomore gelded son of Triumphant Caviar is a perfect six-for-six on the season and has earned over $205,000 career for Beaver, Zeehandelar, Homan and Jim Burnett.

“He’s in good form right now,” said Beaver. “They kind of handed him that race. No one really challenged him and he got easy fractions. It was a nice tightener. I have been a little leery to but him in with aged horses, but there is such a long gap between sire stakes legs, I had to get him in a real race.”

The Beaver Stable hopes to remain hot as they will take twelve horses to MGM Northfield Park Saturday night (July 17) for the second leg of the Ohio Sires Stakes for 2-year-old trotters and the third leg of the 3-year-old filly trot.

“I took one horse out of the sires stakes (You Zig I Zag – 9th place finish) and put one in.”

The colt entering the OHSS action will be The Mighty Hill, who established a new MGM Northfield Park track standard for a gelded freshman trotter with his 1:56.3 victory in the $17,500 Buckeye Stallion Series leg on July 5.

The What The Hill gelding, who was making his career debut, sat patiently early that night and took the lead pass the half mile station and used a last half in :57.1 to score the 2 1/2 length win.

“He was another horse that I thought got far behind the others because he was sore through a lot of the winter,” said Beaver. “I thought he could win the Stallion Series, but was surprised how fast he went.”

The Mighty Hill is owned by Beaver, Donald Robinson and the VIP Internet Stable.

Beaver’s final entry on Northfield’s Saturday night 16-race card will be the sophomore trotting mare, Ozma, in the $60,000 OHSS leg.