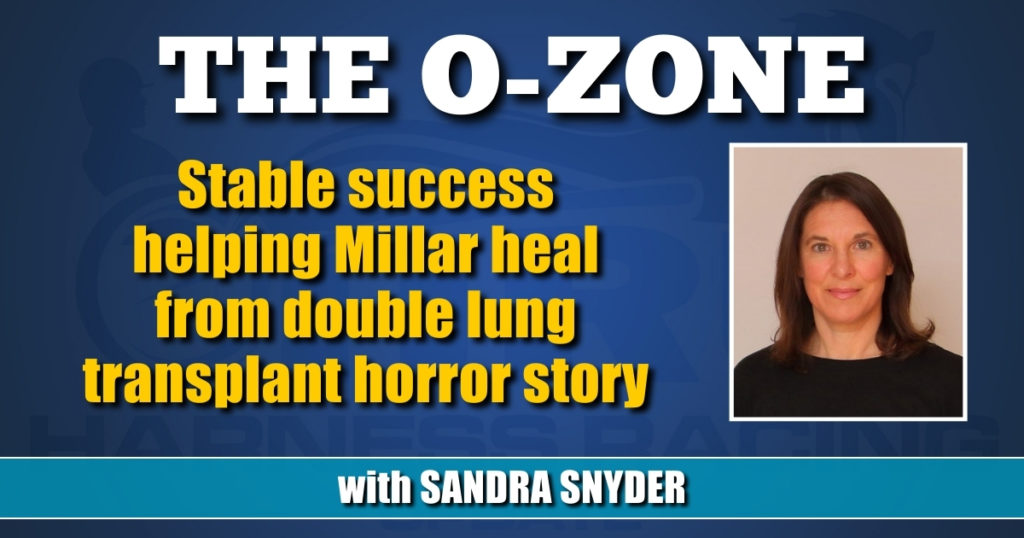 “I had to learn how to walk all over again,” Millar said. “The only thing that kept me going through it all was getting reports on how my horses were training.”

“It’s a little surreal so I’m kind of pinching myself a little bit and just enjoying it,” said owner/breeder George Millar. “I said to (my trainer) Nick (Gallucci), ‘It’s kind of strange this week because we were all pretty excited.’ The whole farm was pumped about Powertrain last week. To have a colt go sub-1:50 his second lifetime start, you kind of think this is what we’d be all focussing on this week, but it was like hardly anybody is talking about him because the 2-year-olds are racing so well.”

The early season success has had extra meaning for the entire Millar Farms team because 2021 started out on an appalling note for its owner. The Stouffville, ON resident, who is in his 71st year, had a double lung transplant in February that resulted in a 13-week stay in hospital and a rehab program that is ongoing.

“It was like a horror show, I had a double lung transplant and found out a day later the lungs they gave me had COVID. So instead of being in the hospital for two weeks I wound up being in the hospital for 13 weeks and lost 35 pounds. I had to learn how to walk all over again,” said Millar. “The only thing that kept me going through it all was getting reports on how my horses were training. I think maybe my horses got together and said, ‘George needs a break this year so let’s race good for him.’ So that’s what’s happening.”

Millar and Gallucci selected two trotting fillies out of the London Virtual Yearling Sale last fall, but they have been delayed due to some fractious behaviour in the paddock, so all of the youngsters currently tearing up Ontario racetracks are homebreds, some of them third generation products of Millar’s breeding program.

“I pick the breedings out and then you’re there when they all get broke, so it’s kind of like you’re there from start to finish. It’s a nice feeling. And a lot of these babies I have I raced their dams, I raced their great dams, I raced their great-great dams,” said Millar. “Prohibition Legal is out of a daughter of Little Black Book, who was kind of my foundation broodmare, and we had a good time with Catch A Wish racing, too. She’s produced me two or three in 1:50, so she’s just a good mare. Serious Matter is still around, she’s walking the field. They call her grandma. She’s not having foals anymore but when Steven weans the babies she goes out and looks after them.”

“You know the funny thing is, that Betterhavemymoney colt, I was going to cull his dam,” said Millar. “She was marked in the book to cull after she foaled out this year and I liked him so much in January I told Steve Samis, my broodmare farm manager, I said, ‘Stevie, I changed my mind. I like this colt, I think we’ll breed her back to Betterthancheddar,’ and I’m so glad I did now.”

Newer members of the broodmare band are also starting to have an impact. Shadow Play son Powertrain is the first foal from Mmillion Blue Chip, a daughter of Rock N Roll Heaven and Molly Can Do It that Millar acquired for $100,000 at the 2013 Lexington Selected Sale. The mare did not find success on the racetrack, but her owner hopes she has found her groove as a broodmare. Powertrain is two-for-two and makes his OSS debut in the second 3-year-old pacing colt Grassroots division at Woodbine Mohawk Park on Saturday (July 10).

“I bought a lot of mares, like really well-bred mares, over the last three or four years and a lot of them didn’t turn out too well on the racetrack, expect for Bestseller Hanover, so a lot of them are already in the broodmare band,” said Millar. “Their first babies are being dropped on the ground this summer, they’ve already had them on the ground, and more will drop next year, so I’m looking forward to seeing what they’re going to produce.”

Gallucci and his team will break seven yearlings this fall and there are 11 foals on the ground. Millar enjoys getting in the jog cart behind the young horses and is working hard on his rehab program to make sure he does not miss a mile behind the 2020 and 2021foal crops.

“Last week I went up and jogged one, but when they did the surgery, they kind of split you right open you know, they did some nerve damage to my left arm. My right arm is great, but I don’t have the strength in my left arm and the horse kind of bolted sideways like it was going to go in the infield and when I went to pull on the left line I would have liked to have a little bit more strength there, so I think I’ve got to do a little bit more exercise before I go back,” said Millar. “But guaranteed I’ll be sitting behind my yearlings in September and jogging them on the farm. That’s what I like to do.”

In the meantime, Millar is enjoying watching his racehorses compete and the babies frolic in the fields with their mothers.

“After spending that much time staring at hospital walls, it’s so nice to be back at the farm, and be around the horses,” said Millar. “It’s getting busy around here now which is nice. And I have all my grandchildren here swimming in the pool right now, so actually life couldn’t get better.”