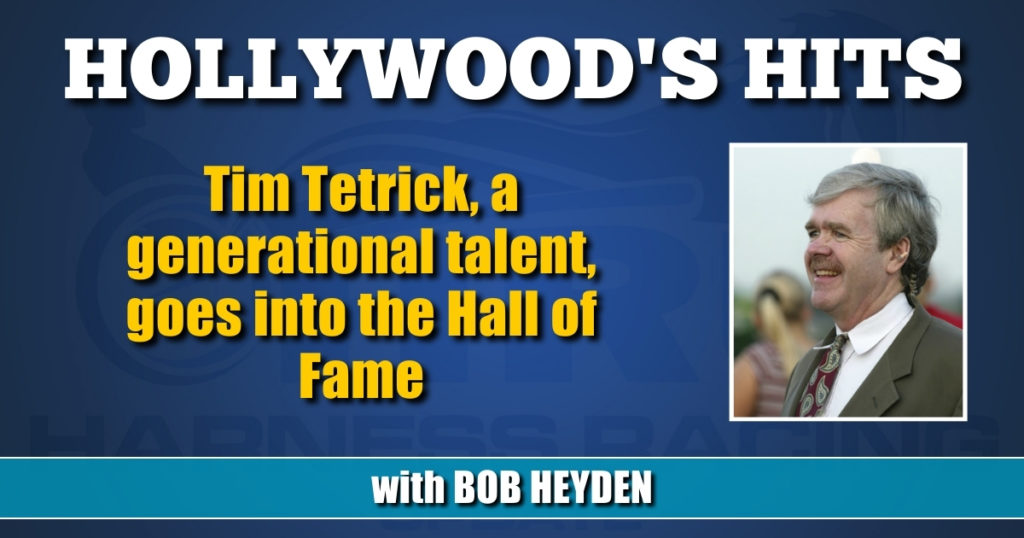 Tim Tetrick, a generational talent, goes into the Hall of Fame

The driver will be officially inducted tonight in Goshen, NY.

Rather than tell you about the once-in-a-generation talent named Tim Tetrick — who will be inducted into the Hall of Fame tonight (July 4) — let’s let the numbers do all the talking. Here’s 39 of them to match his age:

Dave Landry | At 39, Tetrick is among the youngest to be inducted into the Hall of Fame.

Dave Landry | Being inducted into the Hall of Fame is the latest accomplishment for Tim Tetrick.

2. Tetrick was born on Nov. 22, 1981, 106 days after the first Hambletonian was held in New Jersey and 17 months after the first million-dollar single race. Both would factor prominently into Tetrick’s career.

3. When Tetrick set the earnings record in 2008 of a tad under $19.5 million he did so while missing the last six weeks of that epic season due to the first of two hip surgeries.

5. From 1947-2008, the all-time earnings record for a single season for a driver changed 28 times. The longest period of time during that span that it would last was 11 years. Tetrick has now held the earnings title for 13 years and counting.

6. Tetrick was not in the first 26 Hambletonians held in New Jersey (1981-2006), but since he has won eight Hambletonian elims in eight different years for a win percentage of 27 per cent. Only John Campbell has won more (11).

11. Tetrick won three races valued at $750,000 or more for the same trainer in one season in 2007 for George Teague. The pair combined to win the $750,000 Hambletonian Oaks with Danae, and both the $1 million Meadowlands Pace and $1 million Art Rooney with Southwind Lynx.

12. No driver not named Tim Tetrick has ever won a million-dollar race on a half-mile track. Tetrick did so in 2007 winning the Rooney at Yonkers with Southwind Lynx.

16. When the 2021 Hambletonian goes to the gate, Tim Tetrick will set history-again. Nobody has raced in 15 consecutive Hambletonians at the Meadowlands. John Campbell competed in 14 in a row — twice! Had Mal Burroughs used Campbell in the Malabar Man year of 1997, that would have given Campbell 29 in a row. So, Tetrick is about to set a longevity record before he turns 40.

17. Tetrick did not appear in the Trotting and Pacing Guide until the 2005 edition which chronicled his career from 1998-2004.

19. Tetrick is the only driver to drive a $2 million single-season earning trotter and pacer back-to-back —Market Share in 2012 and Captaintreacherous in 2013.

20. From August, 2012 to June, 2013, Tetrick won all three million-dollar races — the Hambletonian and the Canadian Trotting Classic with Market Share and then the North America Cup with Captaintreacherous in 2013.

21. David Miller and Tim Tetrick are the two active leading money-winning drivers. They are also the only two to be north of $100 million at the time of their induction to the Hall Of Fame.

22. Shartin N is the only Down Under-bred horse to be named Horse of the Year in North America. Tetrick drove the great mare that remains history’s fastest female at 1:46.4.

23. Tetrick won three Hambletonian elims in his 20s — all favored — with Cassis, Crazed and Pampered Princess.

26. Tetrick drove seven divisional winners in 2012. No driver has ever had as many divisional titlists in a single season before or since. Included in there is the HOY Chapter Seven and the Pacer of the Year Captaintreacherous — the rare 2-year-old to take down that honor.

27. Driving the top three in the HOY balloting? Yannick Gingras did it in the 2017 season (Hannelore Hanover, Ariana G and Manchego) and Tetrick did so in 2012. (Chapter Seven, Market Share and Captaintreacherous).

28. Twice while winning the Meadowlands Pace Tetrick did so over a HOY. That’s right, He’s Watching set the Pace record of 1:46.4 in 2014 and runner-up Always B Miki was the HOY two years later. One More Laugh edged past Rock N Roll Heaven in 2010 and the latter was that year’s HOY honoree.

32. Tetrick is the only one to have three million-dollar wins prior to age 30 — 2007 twice with Southwind Lynx at age 25 (making Tetrick the youngest to win a seven-figure contest; he was two months younger than Richie Silverman was in 1990 when he won the Wilson with Die Laughing). In 2010 at age 28, Tetrick won the Meadowlands Pace with One More Laugh. Campbell and Scott Zeron each have two million-dollar wins prior to age 30.

33. Sometimes forgotten in Market Share’s win in the 2012 Hambletonian was the fact that 45 minutes earlier Tetrick finished eighth with 3-5 favorite Check Me Out in the $750,000 Oaks. Nice job by Linda Toscano for reeling Tetrick back in.

37. Two of the last three Oaks drives for Timmy finished fifth and later won the Breeders Crown — Next Level Stuff in 2020 and Lily Stride in 2018.

39. What’s a guy gotta do? In 2012, Tetrick had a record seven divisional winners, both the Trotter and Pacer of the year, won the richest race of the year (the $1.5 million Hambletonian), posted an $18 million plus season, had the 1-2-3 finishers in the HOY race, won four Breeders Crown and was not in the top two at year’s end for HTA Driver of the Year.

A few words about Popfinger

Horseman Bill Popfinger will also be inducted into the Hall of Fame tonight, and it brought to mind these memories:

In 1975, he was second to Silk Stockings in the $250,000 inaugural Monticello OTB Classic with Shirleys Beau. Nine years later, Popfinger was again second in the richest ever race — this time to Nihilator in the $2,161,000 Woodrow Wilson with Praised Dignity. That colt would not race past his 2-year-old season and his $1.198 million bankroll from 1984 as a freshman made him the richest 2-year-old ever not to go forward.

Popfinger then trained Kassa Branca in 1988 to win the Wilson with John Campbell driving. When Popfinger won the 1979 Cane Pace with Happy Motoring (Sire of On The Road Again) it was the richest race in the history of New York Racing at the time — standardbred or thoroughbred. And when he won the 1978 Jug with Happy Escort he upset the HOY Abercrombie in the process.