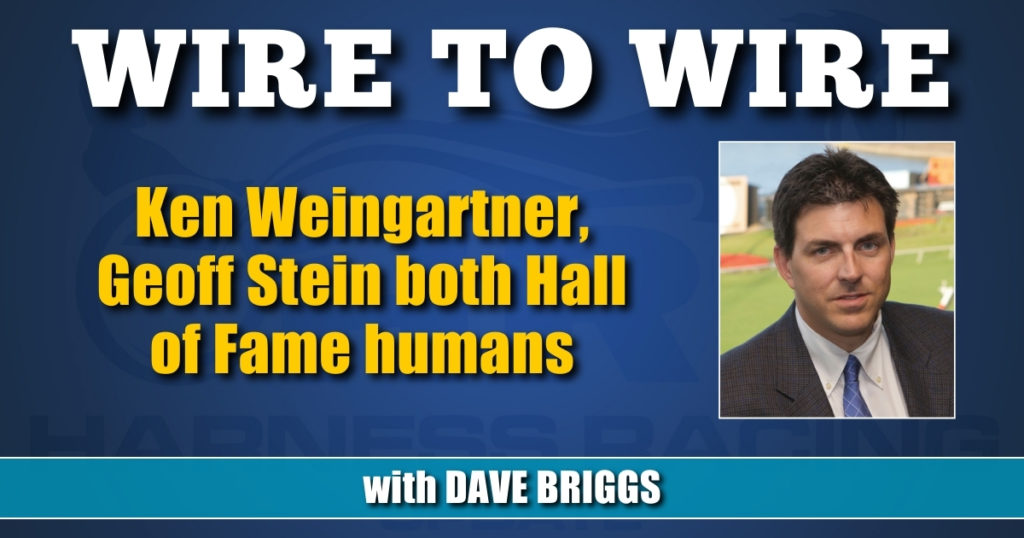 Tonight, both men will, deservedly, be inducted into the Harness Racing Hall of Fame.

If there was such a thing as a Hall of Fame of Great People that celebrated those rare humans that possess, in equal measure, talent, humility and the overwhelming respect and admiration of their peers, Ken Weingartner and Geoff Stein would have been inducted years ago.

I have had the great pleasure to know and respect both men in my life and I’m delighted many share my thinking that they are most worthy of the Hall of Fame honor — though I’m saddened Stein died far too young before he learned of his inclusion among the sport’s all-time greats.

Weingartner, the least attention-seeking person I know, does wonderful, important behind-the-scenes work for the United States Trotting Association as its media relations manager. Once, he and Ellen Harvey had the all-important and challenging job of drumming up mainstream media coverage for the sport under the auspices of Harness Racing Communications. Now that the concept of mainstream media isn’t what it once was, Weingartner cranks out countless terrific features, race previews and post-race reports — most purposely featuring those that have not been written about endless times before. He also takes photos, organizes the weekly Hambletonian Society / Breeders Crown poll of racing journalists — that I’m sure, judging from my own behavior, can sometimes amount to herding cats — helps run the Clyde Hirt Workshop with Dave and Debbie Little and, for many years organized the John Hervey media awards. I wouldn’t be surprised if there’s about 10 other important roles Weingartner has quietly taken on behind the scenes.

His lifelong love of the game and its people is evident.

That he and I share a blind love of the Detroit Tigers and have a similar taste in and passion for music is just a bonus.

Despite his talent and the importance of his work telling the industry’s stories, the best compliment I can bestow is that I’ve never once heard a negative word about Ken Weingartner, a man I’m proud to consider a friend.

Similarly, Geoff Stein was one of the most likeable people I have ever met. His death while jogging 11 days before his 59th birthday in 2012 is still palpable nearly a decade later.

On the day his great trotting mare Moni Maker won the Prix d’Amerique in January of 1999, he invited me and my then boss, Gary Foerster, to join the victory party on the Champ Élysées. The Arc de Triomphe served as the backdrop as the champagne flowed and the City of Lights came alive.

Stein and I were friends from than moment on, but, in truth, most people in this industry were proud to call him a friend — most importantly David Reid, his partner for 24 years at Preferred Equine Marketing.

Stein was always affable, inclusive, more interested in family and friends and the richness of life than anything.

His optimistic, “everything will work out” disposition was particularly good for navigating the many pitfalls of being a horse agent.

“Waking up in the morning you make enemies,” Stein once said of the business of selling horses.

It was long-time friend, sage and trainer Dr. John Hayes that once accurately captured the essence of Geoff Stein.

“He has always been the same. He is the most authentic because he was genuine from the time I met him. There’s nothing manufactured. What you see is what you get. I’ve met few people that were quality, genuine, decent, straightforward, unassuming, no-hidden-agenda-type people like him. And he’s been that way all along,” Hayes said.

The he and Reid achieved great success together in the business is obvious and the most likely reason he will forever be enshrined among his harness racing peers, but I will always remember Geoff Stein for being a Hall of Fame human.