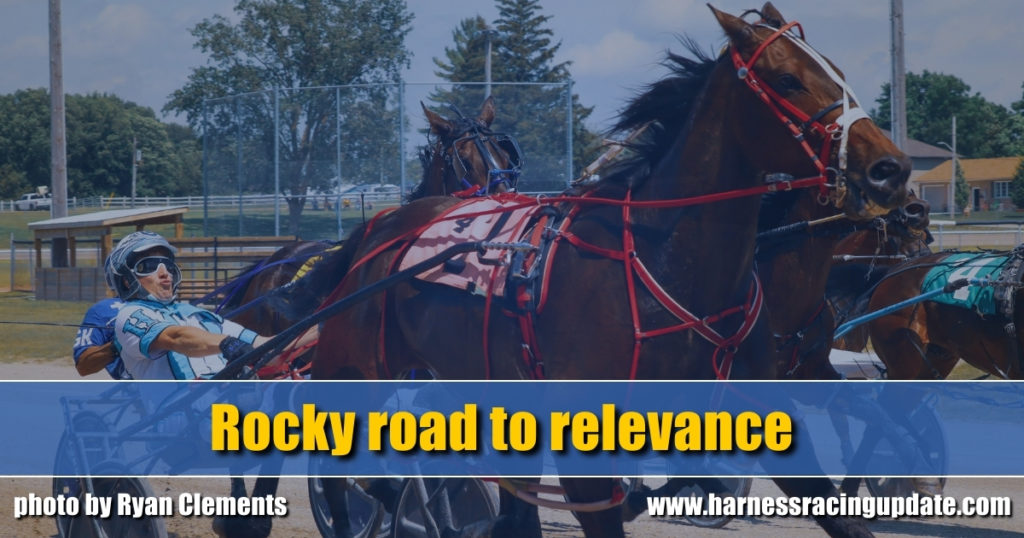 How smaller Canadian tracks are jockeying to become standout summer racetracks as they embrace simulcasting out their races.

Small town summer harness racing is like ice cream: A seasonal treat that’s as perishable as it is refreshing. Last weekend’s Horseplayer Interactive (HPI) wagering menu was stocked with more of these Canadian tracks than ever, tempting bettors to try new “flavors” or return to familiar favourites. The options on the afternoon of Saturday, June 26 included Ontario’s Hanover Raceway, Kawartha Downs and Hiawatha Horse Park; Northside Downs and Exhibition Park Raceway in the Maritimes; and Miami Fair, Manitoba. On Sunday, June 27, Clinton, Dresden, Truro, and Inverness Raceways shared the afternoon.

You could say Clinton Raceway was the chocolate ice cream on that menu, handling $67,714 for a 12-race card featuring Kin Pace eliminations. It outperformed the previous Sunday’s 11-race card, which saw $48,121 move through the virtual windows. This makes Hanover Raceway the vanilla of the weekend small-track options: Handle for 11 Saturday races reached $41,472.

The two most popular flavors had the advantage of familiarity. Clinton joined the only legal Canadian ADW’s offerings in 2014; Hanover was an early adopter, first streaming races via HPI in May, 2009. Other weekend tracks joined the platform more recently, like Inverness Raceway, new this year, or have lately become available to a wider swath of HPI customers (Hiawatha, Kawartha). Can they transcend regional-speciality status? COVID-19 restrictions keeping casual horseplayers away have forced the question.

“First, the camera was missing. Then there was a temporary fix, where we were able to livestream off a phone,” he said. “Then the camera showed up. It was in transit from Winnipeg.” Post time for the first race was 3 pm (Central).

“We have to go on the weekends because all the drivers have 9-to-5 jobs during the week.”

Colbeck said post time was adjusted to tap into the existing afternoon harness market on HPI, because in theory, “all of these small tracks should help each other out.” How they affect each other remains unclear: 2020 was Miami’s HPI debut.

“We couldn’t get a definitive answer from Manitoba Health, but the way we read it was we could have up to, I think, 25 people. Then during the race day, we get a call saying it was an illegal gathering, so everyone that wasn’t supposed to be there had to leave,” Colbeck said.

“I think for our time being, it’s okay,” said Colbeck. “I’m assuming that the plan would be to maybe look at different days next year, obviously when the Winnipeg track comes into play.” (Red River Exhibition Association plans to open a new harness track there in spring 2022.)

“Everything is hopefully good to go” for the 10-race card at the Manitoba fair July 3 said the announcer, including the $12,670 Lady Crocus Stake for 3-year-old filly pacers. Last year’s Manitoba filly champion, Follow Your Nose (p,4,1:53.4f; $55,029) has since won at Pompano and Pocono. A Pick 4 has been added. With local fans still barred this Saturday, horseplayers may want to invest a few dollars online as a show of support. There were also some surprisingly generous prices considering the small fields last weekend.

Grassroots venues such as Miami contribute to the larger industry, he added.

“When people ask, I say we’re almost like a breeding program. They do well here and then they go out and do whatever,” like Marvtherat (p,9,1:54.1m; $48,854), who took his lifetime mark at Cal-Expo this year and has returned to his home province (in race 2, July 3). “Everything starts from the ground up, so if there weren’t these small tracks doing this for the last 60, 70, 80 or more years, if we didn’t have all these horses coming out, the breeding, and the guys and girls who do this as their passion, maybe there wouldn’t be a Mohawk. If we didn’t have junior hockey, we would never have the NHL.”

“I understand that we all go up against each other, but I think there’s a way, like Australia does, where there’s multiple tracks but they never run over each other.”

He cited multi-leg wagers across tracks, regions and even breeds as potentially attractive to bettors.

“I don’t know all the gambling laws and if that would work interprovincially, but if a track in the Maritimes and Manitoba said, ‘Hey, we’re not going to run over each other’ and then we do a crossover Pick 6, three races here, three races there,” both tracks could see gains from new bettors.

Tony Elliott knows about these tracks needing to re-examine their place at the intersection of heritage and innovation. He’s assistant general manager at Clinton and Hanover Raceways. “Historically, there’s been a lot of fan attendance,” he told HRU. “It used to be there was afternoon racing all the time, so I think it has more of the historical feel of how it used to be before it moved to evenings and nights. The small tracks seem to be able to capture that feel. As far as being family-friendly, it’s key to have it in the afternoon, in case [customers] have young kids and aren’t able to stay as long into the evening.”

Elliott said afternoon post times “help in Ontario because the schedule is not as busy. We’re not lining up with Mohawk and Georgian, some of the bigger tracks.” Hanover migrated from evenings to afternoons in 2020, which “had a really positive effect on wagering.” It currently has a 3 pm (Eastern) Saturday post time. Clinton’s Sunday 1:30 pm (Eastern) post time hasn’t been an issue, either.

“Clinton has proved that for the past few years, probably even capitalizing on having a less-busy summer last year and reaching out into the U.S. a little more. This year, it has certainly come back to more of a realistic level, but I still think some great exposure was gained from the US market and in Canada too.”

He agreed with Colbeck’s view that small tracks have a bigger mission: “Our goal is obviously generating revenue like anybody else, but our purpose is to grow the fan base. At the grassroots tracks, that’s what our prime focus is.”

Ontario Racing has structured three tiers of harness racing (Grassroots, Signature, and Woodbine Mohawk Park), which Elliott said promotes growth at all levels. “Last year, every small track took a big step up in terms of marketing and simulcasting, how to get your product out there, things like that,” he said, citing the impact of the pandemic, which temporarily shuttered competitors. “I think long term, we’re going to be in a lot better spot because of that. We have a focus on the online dollars and views, and now we’re getting back to our bread and butter of fans on track, so we’re in a lot better spot than we were two years ago.”

Clinton and Hanover are carefully welcoming back fans and bettors.

“Even with limited capacity, we’re going to be able to have a few hundred. Hanover’s 317; Clinton is 500, so we’re getting a fairly-decent sized crowd,” Elliott said. “This week will be the tell-tale sign of how much [on-track handle] was actually converted [to online wagering] and how much wasn’t: We did $67,000 on Sunday. If we do another $5,000 to $10,000 on track, which would be incredible, we’ll know for sure how much wasn’t converted. We’d know for sure there was a lot of money out there, waiting to come back to the track.”

The measure of success remains long-term for these venues, and isn’t easily reduced to a dollar amount.

“At the end of the day, we need to have fans at the track. That’s our purpose: To grow the fan base and get people out, to get them to fall in love with the sport, not necessarily to wager on it,” said the assistant GM. “We probably will never bet $200,000 a card, but if we can get 2,000 people out to the track every week, that’s our greatest cause right there.”

Weekend afternoons are therefore essential, with a less-obvious bonus for the tracks when fans bet with tellers or machines in the grandstand. “If our sole purpose is just to generate wagering, there are better spots during the week,” said Elliott. “There’s certainly been discussions about that, at the tracks I’ve worked at: If there’s a better spot, without fans, it’s worth looking at. For some tracks that aren’t doing that well, it’s certainly an option. But given the value of the on-track dollar, I think it’s better to have races on the weekend. Even though the simulcast schedule is a lot busier, if you can handle $10,000 on track, that’s equal to doing $100,000 off track: 20 per cent of $10,000 is two grand, so you would have to do $100,000 off track to generate as much as $10,000 on track.”

“I use Leamington as the perfect example,” Elliott said. “They bet more than anyone else on track, so they were not happy with how some of their dates went last year. When they come back, they have the biggest betting fan base in the entire province. Even though some tracks aren’t looking so good now, in terms of revenue generating, they are very, very valuable once we get full crowds back. I use that argument with people who say, ‘Why do we need small tracks?’”

The $50,000 Kin Pace final for Ontario-sired 3-year-old pacing fillies will draw wider attention to Clinton July 4. “I think people are waiting for the stakes season and we’re kind of kicking it off,” said Elliott.

Even with Woodbine Mohawk Park drivers and stakes fillies, scheduling is “huge” when it comes to small-track visibility on busy weekend afternoons, according to Elliott. He works with Clinton GM and race secretary/Hanover race secretary Ian Fleming to ensure as little overlap as possible.

Elliott said he learned from the former manager of racing at The Raceway at Western Fair, Canada’s overall most successful track after Mohawk.

“Greg Gangle would describe it as like a big game of chess: When you’re a small player, they aren’t looking down to see what you’re doing. They don’t care.”

“Try to miss your top four or five tracks all day and you’ll do well, especially in the afternoons,” Elliott said.

Besides strategic timing, Elliott said small tracks can benefit from increased awareness of how they’re seen on the wider ADW stage.

“That’s something I learned from Greg Gangle as well: Everything plays into your product. What is your wagering menu? What is your racing product like? How are you distributing your signal?”

Elliott expects revenue, not just handle, to improve as reopenings expand this summer.