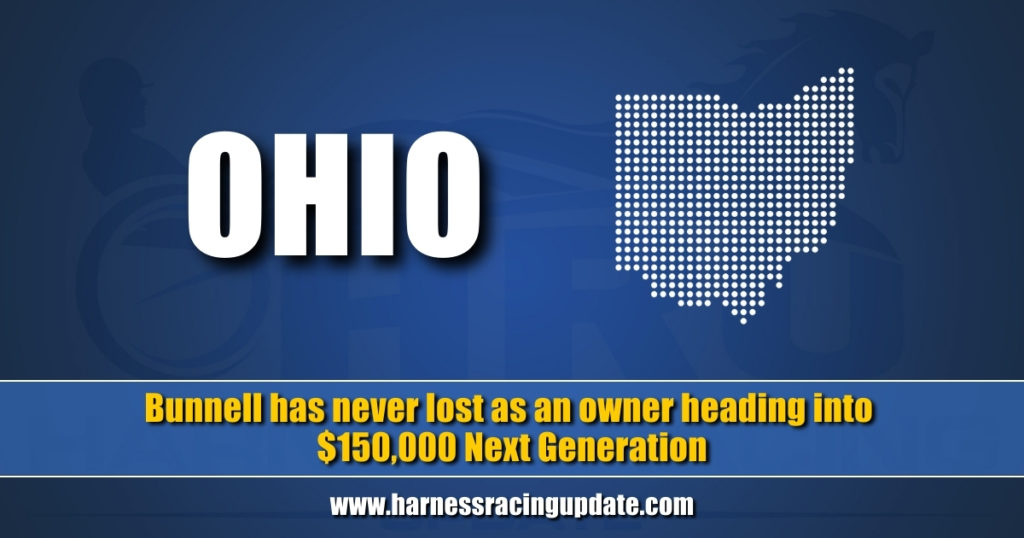 Bunnell has never lost as an owner heading into $150,000 Next Generation

The fan, bettor and now owner will send out unbeaten Fear Our Fayth in Saturday’s Next Generation event for 2-year-old filly pacers at Eldorado Scioto Downs.

Despite his young age of 26, Lane Bunnell has seen a lot – from dusty construction sites to countless complaints from coaches and parents. The one thing that Bunnell hasn’t seen has been a defeat as an owner. He hopes his undefeated streak continues Saturday night (July 3) in the $150,000 Next Generation for 2-year-old filly pacers at Eldorado Scioto Downs.

Bunnell is the co-owner of Fear Our Fayth from the first-crop stallion Fear The Dragon. He co-owns the filly with Benjamin Ackley, Shawn Grooms and Steven Armstrong.

A native of Wellston, OH, Bunnell started in the sport by betting $2 exactas at the Jackson County Fair, then becoming a regular at Scioto Downs.

“I am 100 per cent a fan first and a handicapper at heart,” said Bunnell.

Courtesy Lane Bunnell | Fear Our Fayth at 2 in the John Ackley barn at the Fayette County Fairgrounds.

Last August, Bunnell was a part of a small group that claimed Big Bad Arcster at Scioto Downs for $7,500. The following week, the Big Bad John gelding came first up and won in a lifetime best 1:52.1, but was claimed back by his previous owner. One race as an owner, one win for Bunnell.

Bunnell is a construction estimator by day and was a part-time basketball official for six years where he met Ben Ackley, whose father, John, was the conditioner for the Grand Circuit star Catch The Fire. The younger Ackley is now the head coach for the Miami Trace High School boys’ team, after several years as the Panthers girl’s coach.

“We knew each other through basketball, but we started sitting together at Scioto Downs,” said Bunnell. “We had a common interest in harness racing. I got to ride along with the Ackleys and Catch The Fire. We went to Lexington (for the Kentucky Sire Stakes), the Ohio Select Sale and then the Lexington sale.”

It was at the Ohio Select Sale when Bunnell would get back into horse ownership. He was a part of the group that paid $8,000 for hip #249, the Fear The Dragon—Maggys Art filly by the name of Fear Maggys Odds from the Midland Acres consignment.

“We had a few yearlings picked out, but everything seemed to be going for two to three times more than we could pay,” said Bunnell. “She came into the ring and bidding stalled at $7,000, we bid $8,000 and after some awkward, silent seconds, we got ourselves a horse.”

“We are just a bunch of nine to five guys — Steve is a realtor; Ben runs an auto detailing shop and Shawn is in human resources. We are run of the mill, average guys,” said Bunnell.

The ownership team changed their filly’s name from Fear Maggys Odds to Fear Our Fayth.

“We weren’t a big fan of her previous name,” said Bunnell. “We’ve got a lot of faith in her, if you want to look at it that way.”

Fear Our Fayth would make her uncharted debut at the May 23 Matinee at Washington Court House, winning in 2:08.2.

They sent the filly to Scioto Downs on June 14 for her first qualifying effort. Patiently driven by Tyler Smith, Fear Our Fayth used a :27.4 last quarter to finish second by 1 ¾ lengths in 1:55.2.

In her second qualifying effort a week later, she was third by 2 ¼ lengths and was individually timed in 1:56.1, last quarter in :28.

“The second qualifier was more about getting a good foundation under her while still protecting her. We wanted her passing horses and finishing well,” said Bunnell.

The Next Generation are a quartet of $150,000 races for 2-year-old Ohio-bred, colt and filly pacers and trotters.

The concept of the Next Generation is similar to the Mohawk Million and requires nominators to pay $10,000 on March 15 to claim a spot in the nine-horse field for any of the four events – two trotting races on Friday (July 2) and the pacing events on Saturday (July 3).

“We floated the idea (of buying a spot) back then, but being small time guys with just one horse, $10,000 back in March was a lot to ask for,” said Bunnell. “A lot of things can go wrong between March and July.

“She’s been good since the word ‘go.’ She’s done everything we have ask of her. The first of June we were wishing we had a spot. We saw one come available and we were able to purchase that one.

“She’s done everything right so far, so we thought we should give her a chance to be as good as she can be.”

Charlie May (colt pace) and Winella Hanover (filly pace) won the inaugural Next Generation races. This is the first year for the trotting side.