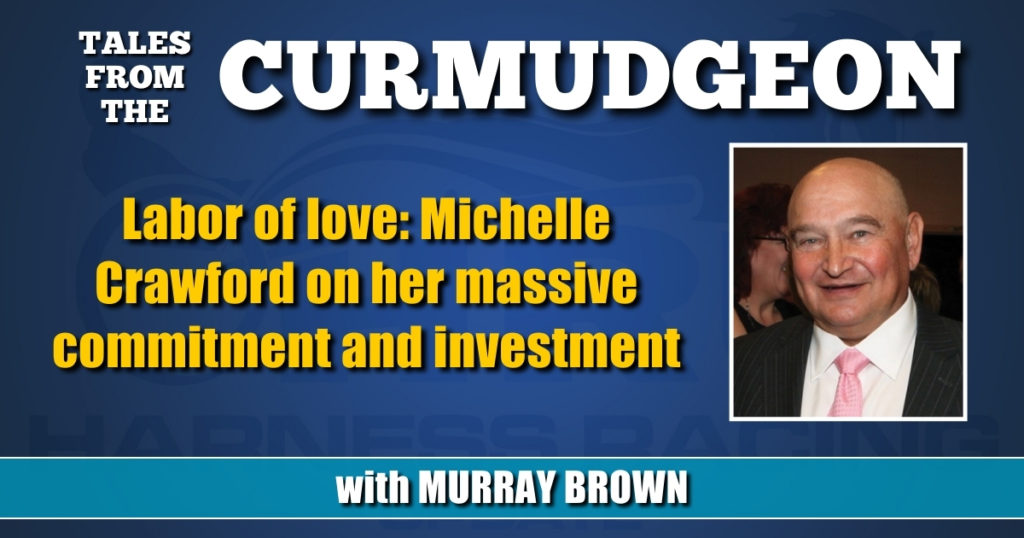 Labor of love: Michelle Crawford on her massive commitment and investment

You are a breeder and with your partners, next year you are expecting a Muscle Hill foal out of Atlanta ($2,659,653), and a Tall Dark Stranger out of Stonebridge Soul ($729,939); also a solely Crawford Farms owned Captaintreacherous out of Hen Party ($592,733); those in addition to almost a hundred other foals, mostly standardbreds, but also a dozen or so thoroughbreds.

How can that be, one might ask? All three of those mares are still racing. Michelle Crawford, the CEO and guiding force, together with her husband Al of Crawford Farms answers.

“I suppose we wanted to have our cake and eat it as well. All three of them, in addition to Warrawee Ubeaut ($1,794,933), were sound and racing quite well. We decided to try embryo transfers on all of them. The only one with which we weren’t successful was Warrawee Ubeaut.”

The old saying is “tall oaks grow from little acorns.” Such was the case with Crawford Farms.

Dave Landry | Al and Michelle Crawford at the Lexington Selected Yearling Sale in 2019.

Al’s dad, Jim, was one of the leading forces in the creation and growth of the New York Sires Stakes (NYSS) program. Jim Crawford and his wife Pat’s horse holdings were never as large as his effect on the NYSS program. Chances are they never raised as many as 10 yearlings in a given season.

That was not to be the case with Al and Michelle. Their horse holdings now number in the area of 400, which includes a hundred or so retirees.

Michelle, let’s start with the retirees. You have about a hundred or so of them.

“As anybody who knows me knows, I am a great animal lover. When we allow them to enter our lives, I believe that we also assume an obligation to care and provide for them in a humane way. There may be some, emphasis on the word ‘may’ who care for their horses as well as we do, but there are none who care for them better than us. It’s with this belief that we feel that once their racing or breeding careers are over, we become obligated to care for them almost indefinitely. That does not only relate to our stars, but also to the ones which may not have achieved that status.

“I believe our horses talk to us. We need to listen. All of them do not adapt easily to the life of retirement. Some of them will tell me that they miss the competition of the racetrack. In some of those instances, provided they are physically up to the task and competitive, we will abide by their wishes and bring them back to training. One thing we will never do is race one of ours in claimers. Others may believe in claiming races. I am not one of them. We tried that when we were racing some thoroughbreds, but it just didn’t sit well with me.

“We do re-home and re-purpose some of them, but we are very careful about whose hands we place them in.

“Last year, we purchased or gave homes to 25 young mares who had no or very little commercial value. We are using them as recipient mares. It was a win-win situation for us and the mares. We were able to undoubtedly save the lives of these mares and in effect give them a reason to live.”

Crawford Farms has both a breeding and racing operation. Let’s talk about each.

“We presently have 111 standardbred broodmares and 11 thoroughbred ones. Almost all of the thoroughbred mares will be bred to our stallion Shancelot This past foaling season we had 67 babies. We have 57 standardbred yearlings which will be offered at Lexington this fall. The breeding operation is under the direction of Heather Marshall who has been with us for 12 years. They say no one is irreplaceable, but Heather is the exception to that rule. She works eight days a week, foals every baby and has a relationship with every horse on the farm. Her husband, Chad, is also an integral part of the staff. He does a great job in maintaining the property. We also have between 18 and 20 employees here. We are in the midst of consolidating the entire operation. We have 1,000 acres in Casanovia which will serve as our base of operations. We also have a farm in Kentucky which was previously William Shatner’s place for his show horses. We originally intended it to be the base of a thoroughbred operation. However, since the growth of the Kentucky homegrown and residency program, we now utilize it to take advantage of the residency requirements which will result in most of our yearlings having dual eligibility insofar as sires stakes programs.

“We have our thoroughbred stallion Shancelot standing at Buck Pond Farm in Kentucky. We presently have 11 thoroughbred mares, all of which had foals this year.”

“We presently have 67 horses which we own fully or in partnership in training. We have them with several different trainers, the majority of them are in Tony Alagna’s stable. In addition we have others with Gates Brunet, Jenn Bongiorno, Ronnie Burke, Joe Holloway, Chris Ryder and Nancy Takter. I’ve probably forgotten one or two. Please forgive me if I have.

How did you become involved in the business?

“It’s all Al. Horses were in his genes and throughout his upbringing. It’s through him that I became involved. I was raised on Panebianco potato farm in the small village of Chittenago, New York. I met Al and through him and his family I became addicted to these glorious creatures. Al is a natural horseman and a brilliant businessman. He developed and grew Bankers Health Group into a giant in its industry. That takes up most of his time, but he is still quite involved in most of our equine ventures. He has great knowledge of horses and is also an excellent handicapper. We love to attend the races, especially when our horses are racing. We do that as often as we can. When we do, we also help the handle somewhat.”

Tell us about the makeup of your broodmare band.

“I probably sound as though I am bragging, but I believe that on a mare for mare basis we might have the very best broodmare band for a large operation as exists in all of harness racing. We are especially strong on the trotting end. There is no doubt in my mind that we have as many, if not more ‘Blue Ribbon’ type trotting broodmares as exists in the sport.”

As far as the stallions to which you breed your mares to, how do you go about doing that?

“It is mostly based on Al’s knowledge of horses and in his being a great student of pedigrees. I am glad to share the responsibility with him. We are highly invested in New York and to stallions standing in the Empire State to which we breed most of our mares. Then we almost end up ‘double dipping’ by shipping them to our Kentucky farm to take advantage of the Kentucky as well as the New York programs. Presently, we are entitled to breed 16 mares annually to Huntsville, 12 to Chapter Seven, several to American Ideal as well as our own stallion Crazy Wow. If Crazy’s foals race the way they look, he will become a terrific stallion. We also regularly breed to horses like Muscle Hill, Captaintreacherous and Walner. We own a significant piece of Tall Dark Stranger who in my and the opinion of many others is a ‘can’t miss’ stallion. We will know very quickly about him. The book of mares he received in his first season at stud is likely the finest group ever assembled being bred to one pacing stallion in a given season.”

Who is your favorite horse with which you’ve been associated?

“When you’ve had two Hambletonian winners that would have to be a pretty difficult choice. I love both Atlanta and Ramona Hill. However the difference would have to be in that we raised Ramona Hill and have been invested in her all her life and we bought into Atlanta. They are both great and it has been a privilege being involved with each of them.”

As a market breeder do you have any problem choosing between that and racing your own horses?

“Not really. Our philosophy is to offer all of our yearlings at public auction with the possible exception of a few fillies we might keep to further the makeup of our broodmare band. People know that we would generally not be adverse to becoming partners on some that we might be offering. Of course, we have to be careful about who we join up with, both from the standpoint of wanting them to get into good hands and insofar as dealing with people of good reputation.”

You mentioned philosophy. In our conversation I found yours with regard to your customers to be somewhat unique.

“In short, we believe that the customer is always right. Even if he is wrong, he is still right. The words ‘buyer beware’ do not exist in our vocabulary. We try to be totally above board with all of our yearlings. X-rays are always available. Anything that we might be aware of that could be judged as detrimental is always disclosed. Even with those safeguards, if a customer becomes aware of something that displeases him, if he makes us aware of any pre-existing condition with any of our horses, we will discuss it and our goal will be to have a conclusion that is satisfactory to all parties.”

You told us how you sell your yearlings. How do you go about determining how and what you buy?

“Unless I am able to sneak away at the Kentucky Sale without Al knowing about it, almost all of our yearling buying takes place at Harrisburg. It’s certainly not because one or the other has the better horses. Its rather because a big factor in determining how much money we might have to spend is dependent on how our yearlings have sold.

“We believe in and love the business. Everything we earn in it and more will be reinvested in it.”

What remains for Michelle and Al Crawford and Crawford Farms?

“Hopefully, a whole lot. We love owning and buying horses. I’m sure there’s a whole lot yet to do, some of it probably unthought of at this point. As far as races go, if I had to pick one to win, I’d want to win the Little Brown Jug and also have the Crawford Farms imprint on all of the major events in the sport. But there are and will be others.

“We have been a major race sponsor of events in the sport for almost as long as we have been involved in harness racing. We sponsored The Meadowlands Pace for five years and Grand Circuit events at Lexington just about every year. This year we will also be sponsoring every leg of the Kindergarten Series for 2-year-olds.

“We also have been and will continue to be active in various fund raising events in the sport.”