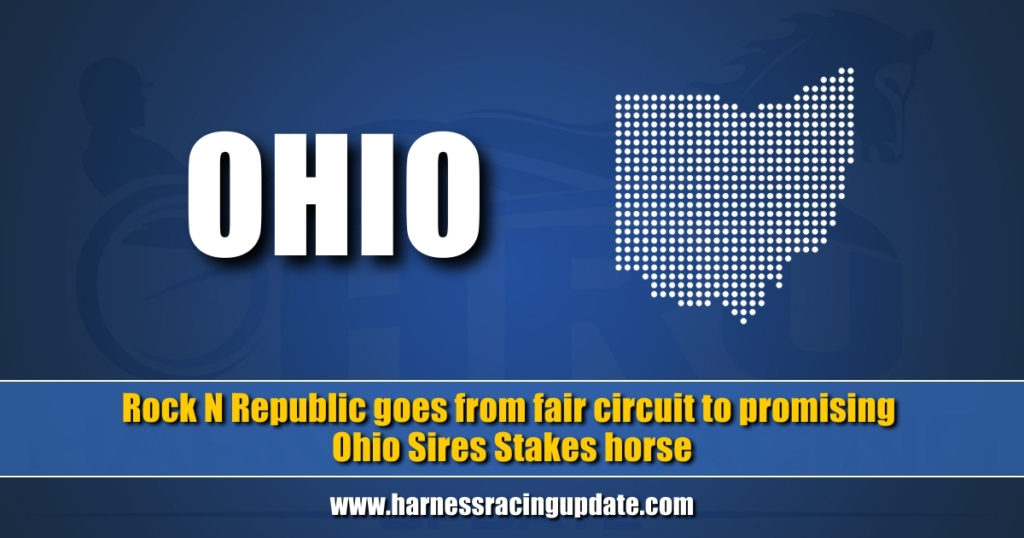 Rock N Republic won half of his 12 freshman starts in 2020 while racing primarily on the Ohio fair circuit for owner Dossie Minor. In limited attempts at Northfield, Scioto and Dayton, a trip to the winner’s circle eluded the young pacer. It may have been a blessing in disguise, as the gelded son of Pet Rock—My Juliana’s Girl used a non-winners of one series to launch into sires stakes last week, winning impressively with a 1:51.3 performance for driver Josh Sutton on June 19.

Last season, Rock N Republic was campaigned by Ronnie Gillespie, who also served as driver in nearly every start. With a 6-1-2 record, the freshman earned $27,522, taking his 2-year-old mark of 1:54.2 at Delaware. This season, Minor reached out to Robert Taylor, who has raced other horses for the Illinois-based owner, and is stabled at Harrah’s Hoosier Park.

“He brought him over to Hoosier and I qualified him. I’ve raced horses for him over here the last couple of years,” said Taylor, who is building a training center four miles east of the track in Middletown, IN. “He asked if I would take the colt. It would be a little bit too far to ship from Illinois.”

After the qualifier, where the sophomore wired the field in a time of 1:53.4, Taylor entered his new pupil in the Jerry Knappenberger series at Scioto Downs. In his seasonal debut May 11, Rock N Republic won by two and one-quarter lengths as the favorite, timed in 1:54.1 with Taylor in the bike.

“He was getting a little bumpy here and there. I’ve made some shoeing changes a couple of times and adjusted his hobbles. He’s getting better and better now,” said the trainer.

In the second leg a week later, Taylor moved the 3-year-old to the lead shortly after a :27.3 first panel and controlled the tempo on the way to a 1:53.1 score. Once again the favorite, Rock N Republic finished more than two lengths in front in the $8,000 contest. Drawing post two in the $16,000 Knappenberger pace final, Taylor was able to settle in behind favored Imma Be through fractions of :27.1, :56.2, and 1:24.3. In the stretch, the gelding dispatched Imma Be and paced clear by nearly two lengths with a 1:52 clocking. Bred by L & J Racing LLC, the $7,000 Illini Classic purchase raised his record to three-for-three on the year.

“The non-winners of one series really boosted his confidence,” said Taylor. “The Plan B would have been to race him in the Buckeye Stallion Series. We decided to let him tell us if he went a good mile in the series final.”

By virtue of his effort, Rock N Republic earned a shot at sires stakes competition, entering the second round of action. After a tightener at Hoosier Park, qualifying in 1:52.4 on June 12 with a :26.2 kick home, Rock N Republic lined up behind the Scioto starting gate for his first sires stakes event. He drew post seven in the $50,000 contest, and for the first time this season, Taylor vacated the bike, calling upon Sutton to guide the pacer.

“I called Josh up about driving him because I had some horses in at Hoosier. I stayed here and asked him if he would drive for me,” Taylor said. “I told him, ‘He’s not a real big horse, but if you can put him on a helmet, when you pull him off a helmet he explodes.’”

Armed with that information, Sutton left the gate sixth before picking up cover from Bare It Hill and Kayne Kauffman through a :56.2 opening half. Deciding he could not sit any longer as the field raced to three quarters, Sutton moved three deep and advanced on leader and favored Four-Star Flash. Rock N Republic forged to the lead shortly thereafter and held off closing Laughagain Hanover by a neck with a lifetime best effort.

“He’s small. He’s not a very big horse. He’s right at 15 hands. But he’s as gritty as a pit bull. He does not know he’s small,” said Taylor. “He’s got a lot of guts, that’s his best attribute. He’s a gritty little horse that does not like to give up.”

By comparison, Charlie May bested slight favorite Heart Of Chewbacca by half a length in 1:49.3 in the second OHSS division June 19, a full two seconds faster than Rock N Republic’s mile. Taylor doesn’t know if his gritty pacer can match those exploits, but he’s excited to see how the season unfolds.

“That’s going to be left for him to prove. I wouldn’t be upset if he’s third or fourth best in the state,” he said. “We’re tickled to death and he can still make a lot of money picking up checks in those events.”

Still undefeated in 2021, Rock N Republic has banked $41,000, bringing his career tally to $68,522. The sophomore is eligible to a few fairs, and with several weeks between sires stakes starts, Taylor plans to prep his charge via overnight races at Hoosier Park.

“Hopefully we can keep going forward with him,” he said.