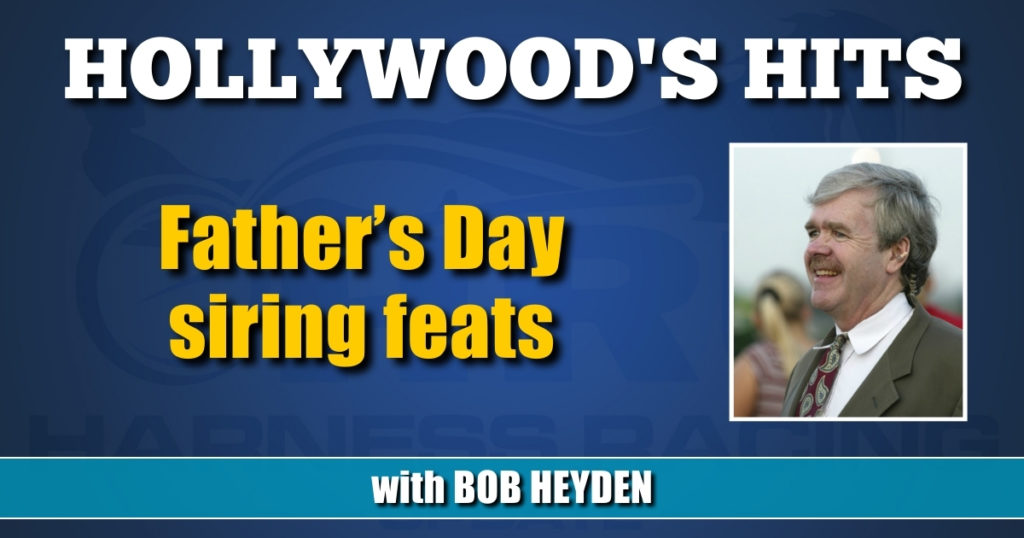 Was Cam Fella better after his two-time Horse of the Year racing career? It appears so.

Cam Fella is also the last sire to have had two different HOYs — 1991 and 1994 in Precious Bunny and Cams Card Shark, respectively.

No other sire has done this in over 30 years.

The Meadowlands Pace runner-up has sired by some big-money winners over the years.

They have out-earned the Pace winners 3-1.

In 1978, Abercrombie was named HOY. He was 22-for-33 and was an iron horse who passed that trait along quite well. He had a big impact as a stallion.

In 1980, Storm Damage and Tyler B finished second and third, respectively, to Niatross in the pace, the sport’s first million-dollar test. Both out-earned Niatross as a stallion. Storm Damage’s Call For Rain won back-to-back Breeders Crowns and his son Redskin still holds the all-time 2-year-old single season earnings record at $1.407 million from 1986.

In 1982, No Nukes was nipped on the wire in the Meadowlands Pace by Hilarion. No Nukes only went postward 19 times in his career, but his siring career was beyond outstanding — and right from the get-go, too. Can you say Jate Lobell? It is very unusual that two well-over $100 million stallions emerged from the same crop, but No Nukes and Cam Fella did just that as foals of 1979.

In 1987, Laag was second to Frugal Gourmet and had a nice career a stud. As did third-place finisher Run The Table.

In 1988, Camtastic came from the initial Cam Fella crop and the fans loved him going in. It was Matts Scooter’s year, however. Camtastic held his own after a strong career into his third million when he hung it up.

In 1991, Artsplace was second by a nose — just holding the place spot — with Precious Bunny taking the big prize in the first ever sub-1:50 Meadowlands Pace. Artsplace’s siring career and impact are still quite evident today. His first crop had a Pace winner Dream Away and three years after he passed his son Sportswriter won the Metro and North America Cup and is in the top five ever among pacers in earnings per start.

In 1993, Life Sign fell a bit short of Presidential Ball and he too sired a Pace winner from his very first try — Day In A Life in 1998.

In 2000 Astreos, was next best to Gallo Blue Chip and went on to make waves in the sport for years to come.

In 2001, Bettors Delight was second to Real Desire, but is now the all-time leading sire in horse racing history with well over $350 million worldwide, including his first HOY in 2020 Tall Dark Stranger.

In 2002, McArdle was a couple bucks shy of Mach Three — and notable in that Pace was the absence of Art Major. Art Major would be he runaway leading earner that year. Both would go on to each sire a Horse of the Year.

In 2008, Somebeachsomewhere, in what many consider the best and most memorable race ever — his duel with Art Official off the :51.4 half and surviving to the wire in a world record 1:47. The late Beach has dominated right from the start and his name will live on for decades to come.

In 2010, Rock N Roll Heaven was the second Pace runner-up in three years to be named HOY. One More Laugh got him in the last step. Rock N Roll Heaven’s siring career is more prominent Down Under where they wait on him longer and his older sons and daughters have stepped up.

A big Father’s Day mention to super sire Adios, who was the sire of eight Jug winners, including a mind-boggling five in a row from 1958-1962.

Meanwhile, Stars Pride, who as a $2,750 yearling purchase, went on to a stellar career on the track and a legendary one later at stud. He sired 10 Kentucky Futurity winners and eight Hambletonian champs. He is the #1 sire of Triple Crown winners.

Hats off to Nickells clan

Hats off to Hall Of Famer Bruce Nickells — 93 on July 5. His daughter was oh-so-close to being the only female driver to race in the Hambletonian 20 years back with Lavecster, who wound up fourth with Mike Lachance subbing. Brooke then was 2nd and 3rd in two Kentucky Futurity heats and final and that is the last time for the ladies in a Triple Crown event.

Ron Pierce’s dad Don won 50 or so races in his Meadowlands career.

Elmer Looney was something of a fixture on the Meadowlands backstretch in its first 15 years and daughter JoAnn and granddaughter Heather have been carrying the torch ever since. Susan won at age 16 with Won For All and that record is safe forever.

Frank Browne and Flo and Diane Browne all won in East Rutherford.

This year marks the 30th anniversary year of Father’s Day in 1991 at the Meadowands when 13-year-old Oregon beat his 7-year-old son Zealot in the same race.