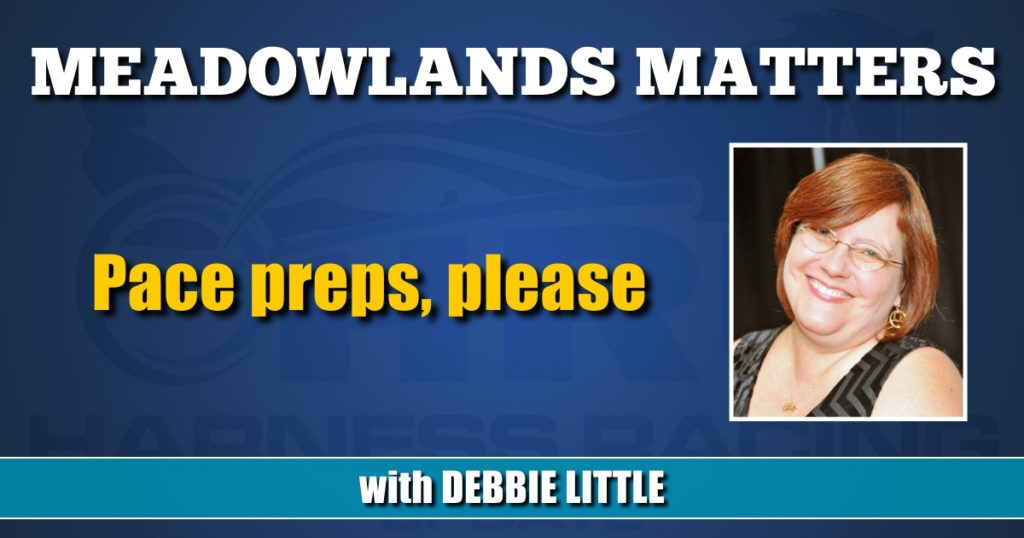 With the 3-year-old open at The Big M rarely filling, trainers of top sophomores are having trouble finding prep races for their star pupils heading into the Meadowlands Pace.

With three weeks until the Meadowlands Pace eliminations, the top contenders are focused on finding prep races.

Most expected their Pace path would go through Canada, but with the Somebeachsomewhere and North America Cup rescheduled to later in the year, trainers are left scrambling.

“I’d just like to get raced,” said Hall of Famer Joe Holloway, trainer of Perfect Sting.

Holloway has been looking for starts for his 2020 Dan Patch 2-year-old colt champ, but has not had much luck.

Perfect Sting’s only 2021 start came on May 16 in a Pennsylvania Sire Stake (PASS) where he finished second to Abuckabett Hanover. He was scheduled to race again the following week in a PASS event but was scratched sick. He was last seen qualifying at The Big M in 1:48.4 on June 5.

Ideally, Holloway wanted to compete at The Meadowlands against his own division, but those open races rarely fill.

“I went back and looked at 2019 and 2020, and in the 3-year-old pacing colt category, the number of entries topped out at two,” said Scott Warren, Meadowlands’ race secretary. “It’s not like it’s something new where a race is not filling for a top pacer going into The Meadowlands Pace.

“Look at last year. Tall Dark Stranger [in his] first start had to go in non-winners of $22,500 against [older foes] and he beat them. Ideally, even though he won – and won impressively – that wasn’t probably the ideal spot that [trainer] Nancy [Takter] wanted to be in. But she had to have a race in him.”

Holloway finds himself in a similar position this year taking on older horses Saturday night (June 19) in a N/W $12,500.

“I really didn’t want older horses but this is the best-case scenario,” said Holloway. “There were only two entries in the 3-year-old open and I called people [Monday night] trying [to get more to drop in].”

In his first start last year, Tall Dark Stranger went 1:47.4 on June 27 and his next outing was in The Pace elims on July 11. No 3-year-old has gone that fast this year.

“It’s different to race against older horses, because there’s not as much of a breather in the races as there is maybe with 3-year-olds,” said Takter. “And just the switch of speed is different because those horses are more mature and able to switch gears quicker than maybe a 3-year-old would be able to. For Joe, I’m sure it’s not an ideal situation, but it is what it is. It’s the curse of having a good 2-year-old year.

“Perfect Sting had a good qualifier and he went a fast time but everybody has to remember that qualifiers and races, you can’t compare them, because a qualifier is more like a training mile. You never get pushed to the quarter. You never get held out. And you’re rating and dictating your own mile in a qualifier, especially when you get to the front like Perfect Sting did.”

Trainer Ron Burke’s Southwind Gendry was the other colt who dropped into the open, but rather than going up against older competition as well as Perfect Sting, Burke will qualify him tomorrow morning at The Meadowlands and then race in a PASS event on June 26 where he could possibly face Perfect Sting.

Takter’s Always A Miki took on older competition at Harrah’s Philadelphia on Sunday (June 13) and got up by a neck in a gutsy performance.

“That’s a little bit of the problem with these horses that have good 2-year-old seasons and they have a lot of wins and a lot of money on their cards because you really don’t have anywhere to race them unless you have a stakes race,” said Takter. “If you want to find them a tightener race you have to go against older horses because the 3-year-old races don’t fill.

“At this point I think everybody wants to play a little bit of chess. You want to give your horse a good mile but you don’t want to burn your horse up too much, you want to leave a little bit in reserve all the time when they race now.”

Burke has never had a problem racing a 3-year-old against older competition, and in fact, did so with his 3-year-old filly pacer Blue Diamond Eyes last Saturday (June 12) at The Meadowlands.

“She did fine. It depends on the horse,” said Burke. “They don’t make each other check their birth certificates behind the gate, so I don’t really stress about s – – – as much as other people do. I worry about my horses, not what everybody else’s horses are.”

“Right now, I’m happy,” said Burke. “Everybody’s going the right way instead of the wrong way. When we get close, I’ll have these things tight enough. I won’t get beat for lack of being fit.

“I did learn that I can race them a lot harder than I thought. Last year, I decided I needed to make up a lot of money and I just entered them in every race that they were eligible to and my horses were just as good at the beginning of the year as they were at the end of the year. I think we’ve gotten too much into babying them and turning them into thoroughbreds. They’re not thoroughbreds. These are standardbreds. I used to race Foiled [Again] 40 times in a year and he made it clear to 14.”

Lounge and Café tables for Meadowlands Pace Night (July 17) may now be reserved at www.playmeadowlands.events/event-details/pace-dining

Reservations can also be made for Hambletonian Day (Aug. 7) at www.playmeadowlands.events/event-details/hambo-dining