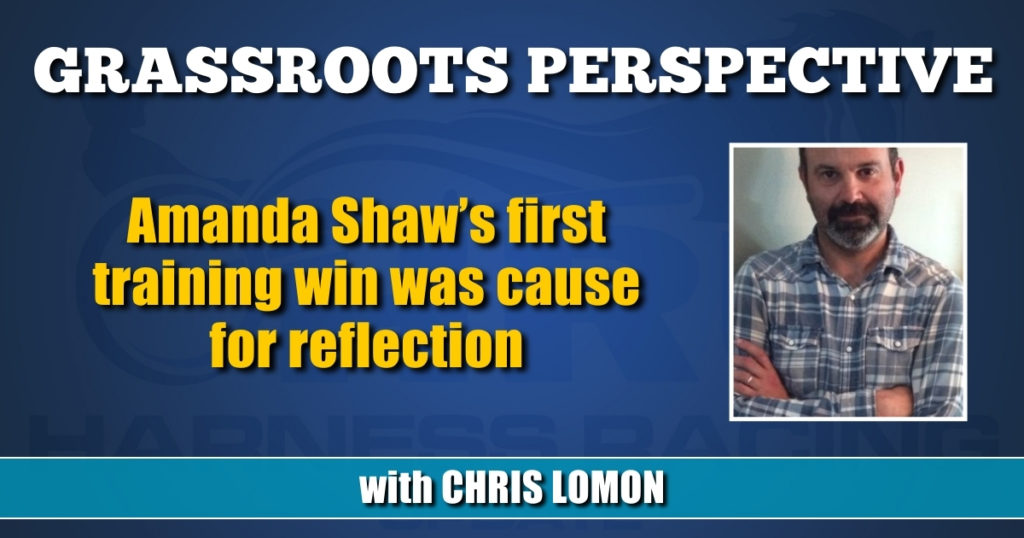 Amanda Shaw’s first training win was cause for reflection

A pair of thoughts crossed Amanda’s Shaw mind as she posed for the win picture at The Meadows on June 3.

Moments after Onlythetuffsurvive, a 9-year-old son of A Stud Named Sue, crossed the wire a 2 ½-length winner in race five, Shaw flashed a big smile alongside her husband, trainer Jason Shaw, their daughter, Aria, and the connections of the veteran pacer.

Sent off as the 3-5 favorite, the bay gelding, owned by the couple’s son, Mason, held a two-length lead at the stretch call and easily fended off his rivals to notch his 41st career victory in a time of 1:52.2.

It was a far smoother journey than the one he encountered in his previous race on May 28, also at The Meadows.

“The week before, the horse had a tough trip. He ended up being pulled first-up and he was hung the rest of the mile and finished fifth. He still had a good effort, but I wasn’t sure what to expect this time. He got away in the two-hole and he was a lot stronger than I thought he would be when he pulled him out. I was just hoping he would get there and he wouldn’t stop. He just kept going.”

Chris Gooden | Amanda Shaw (third from the left) celebrated her first career training victory on June 3 at The Meadows with family after Mike Wilder drove Onlythetuffsurvive to victory.

“I’m pretty vocal when all my horses are racing. People laugh at me and think I’m crazy, but if you’re not passionate about it, then you shouldn’t be in racing.”

It represented the first career training win for Shaw, a moment she had long dreamt of.

“I thought of two important things to me,” said the Pennsylvania-born horsewoman. “One, being that I proved to myself that I could do it on my own, and the second thought that came to me on the way over to the winner’s circle was that I hoped I made my mom and grandpa proud.”

She no doubt delivered on both.

There was, however, one regret.

“I wish my Mason could have been there, but he had school. Otherwise, it was a great moment, something that I will always remember. We had a couple of other horses that day, so I just focused on them after that. We ended up going out for dinner as a family the next night, a nice chance to celebrate together.”

Shaw, who can trace her family connection to horses to the 1950s, was destined to find her way to the racetrack. Her mother, Lisa Beinhauer, started her career at the fairs at 16 and went on to head her own stable for several years.

Married to fellow trainer Jason Shaw – the couple first met when they were 16 – Amanda, a fourth generation horseperson, worked as an assistant to her husband before making the decision branch out on her own this year.

One of her biggest joys is in sharing her love of the sport and the animals with her children.

“Having that chance for them to be part of this world, it’s very important to me. There are a lot of industries and businesses where that opportunity isn’t available, so we’re pretty lucky. This is a family business. The kids will come to work with me, we travel to the fairs together, horse sales – wherever I’m going, they are going. Mason, sometimes he loves it and sometimes he doesn’t. Aria, she loves giving the horses hugs and petting them. Both of them pretty interested.”

Shaw views the times her kids are around the barn and seeing first-hand what their parents do as a seemingly endless educational experience.

There are life lessons to be learned as well.

“They really do learn something every time they are at the barn. It teaches them the value of hard work and what you get out of it. That’s important. A lot of kids these days don’t understand that. You won’t go anywhere if you don’t put in the time and effort. It’s not just handed to you. You have to work for it.”

Shaw has heeded those words for as long as she can recall.

She’s hopeful the commitment to her craft leads to bigger successes in the days and years ahead.

“I don’t really know what my short-term goal would be. We just purchased a baby, a 2-year-old at the Harrisburg Sale. We bid on her online. My husband wasn’t interested in working with the babies any more – that’s all we used to do when we did the Pennsylvania fair circuit – because we’ve gotten away from that over the past few years.”

Early on, Shaw figured she’d be in for a rough ride with the new addition to her stable.

“So, I bought this filly, Judge Joy Bean, and she was kind of difficult early on. She didn’t want to pace and cross-fired all the time. She would take her shoe off and lost a shoe every time we jogged her.”

A bay daughter of Western Ideal, owned by Mason and Aria, the $8,000 purchase had her first qualifier on June 8 at The Meadows, crossing the wire in 2:01.1.

“She is starting to coming around. She’s a pretty big filly. We hope she could be Stallion Series material, but time will tell. Even if that doesn’t happen, we’ll get her to some of the fairs and race her there.”

Currently, Onlythetuffsurvive and Judge Joy Bean are Shaw’s only trainees. But her days are full with tending to the nine horses Jason has as well, leaving her one short of dozen horses that are under her care.

Is it as simple as the husband and wife that races together stays together?

“Sometimes,” she said with a laugh. “I feel like if you can manage racing horses together and be around each other almost the entire day, you can handle almost anything.”

And as Shaw proved to herself, she can also achieve a long-held goal.

“Winning a race as a trainer, it’s something that I had always hoped would come and when it did, it was a really amazing feeling. Hopefully, there are even more of those moments to come.”