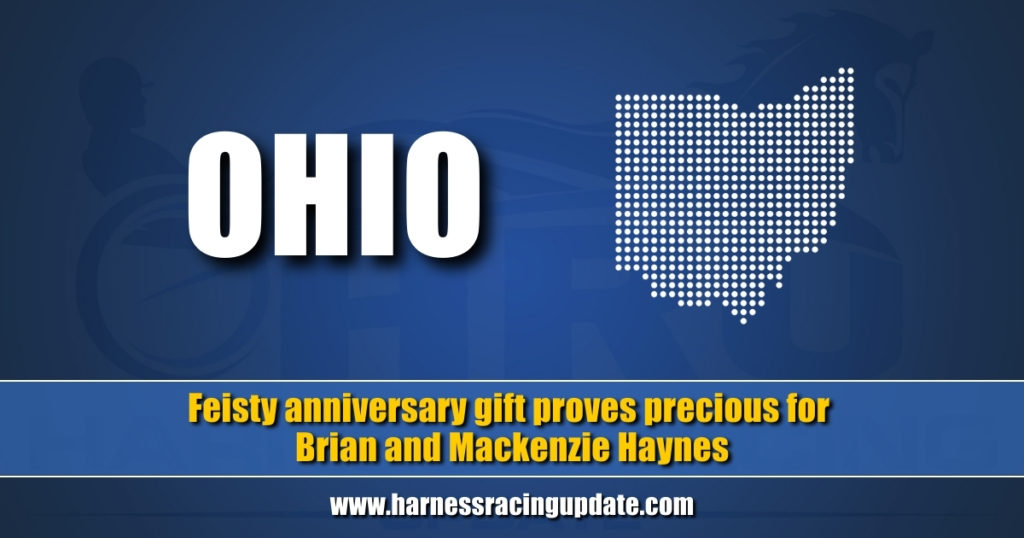 Smothastenesewisky, the couple’s first yearling purchase, has earned over $100,000 and now is an Ohio Sires Stakes winner after being purchased on a whim for $3,000.

Some men buy their wives diamonds and exquisite jewelry to celebrate an anniversary. Others plan extravagant getaways. Ohio horseman Brian Haynes purchased a pacing filly for his significant other, Mackenzie. And while Smothastenesewisky may seem an untraditional gift to give a loved one, the sophomore recently pushed past $100,000 in earnings after capturing an Ohio Sires Stakes (OHSS) division Saturday, June 5 at Northfield Park.

Haynes is very familiar with racing in the Buckeye State. His late father, Keith, was a long-time horseman that made his living as a trainer in Ohio and later at Winbak Farm. The 34-year-old has punched a time clock at Red Color Pet Foods, near his home in Washington Court House, for the last eight-and-a-half years. He has always had an interest in harness racing and registered his first starts as a trainer in 2006. After not sending out a single starter in 2018, the couple decided to play the claiming game.

“We just saved up some money and in the late winter or early spring of 2019, we started claiming horses,” he said. “It took off from there.”

At work by 6 a.m. and done by 2:30 in the afternoon, Haynes would immediately head to the Fayette County Fairgrounds to train his small stable. He had success during the 2019 campaign, harnessing 36 starters that produced five wins, seven runner-up performances and five third-place efforts. Purse earnings totalled just shy of $44,000. Mackenzie floated the idea of buying a baby, but Haynes was a bit reluctant. Still, the couple found themselves at the November Blooded Horse Sale.

“We went to the sale and wanted a trotter, but we couldn’t afford one,” Haynes said. “We really didn’t pick her out. We were just standing there and looking at her and I said, ‘What do you think of this one?’ My wife said, ‘She looks okay.’ I bid one time and bought her.”

Sired by Nob Hill High out of the unraced Western Ideal mare Tender Spirit, Smothastenesewisky was hammered down for $3,000. The rigors of teaching a young horse to race can test a man’s patience. Haynes was battle tested and up for the challenge, with two boys at home under the age of 3. As he worked with the filly, the conditioner felt she had potential. His instincts were soon reaffirmed.

“We had a friend of ours that helped break her and trained her down a little last year. He told me, ‘This filly is very nice,’” said Haynes. “I thought she was nice, but it helped that someone else was telling me that. After we took her to Delaware and qualified her, it kind of set in that he was being serious.”

Not made eligible to sires stakes, Smothastenesewisky raced primarily in the Buckeye Stallion Series and a few fairs during the 2020 campaign. She made her debut at Circleville in June, wiring the field by four-and-a-half lengths in a time of 2:03.3. The filly would go on to win her first six starts before tasting defeat. In the Buckeye Stallion Series, she collected six victories, including a 1:52.3 score in the $60,000 championship at Hollywood Gaming Dayton Raceway.

Smothastenesewisky finished the season claiming victory in eight of nine starts while accumulating $77,981. Her accomplishments are further highlighted by the fact she drew post seven or further outside four times, and battled female issues and tying up throughout the year.

“I kind of regretted not sire staking her last year, but it might of worked out better,” said Haynes. “She learned to race, we made real good money last year, and had a lot of fun.”

Around the barn, Smothastenesewisky is affectionately known as “Snips,” a name given by Haynes’ oldest son, Ryker. Snips refers to the red-headed character Snips Stone in the television series Spirit Riding Free, described online as “rude, mischievous, lovable, and energetic.” Ryker’s nickname couldn’t be any more appropriate, as the spoiled filly likes to keep things interesting in the shed row.

“She’ll do things just to make me mad. If I put her in the cross ties and go to get the jog cart, she’ll run to one side and try to turn around. Just stuff where she knows better,” the trainer commented. “She’s something else, I’ll say that.”

Added Mackenzie, his bride of seven years, “She’s like a person. She’s like an ornery little kid; she’s like dealing with my boys. She fits right in with the kids.”

Now a sophomore, Smothastenesewisky has not fired out of the gate stringing together multiple wins as she did last season. The familiar struggles of 2020 continue. She kicked off the year with a third-place effort in the Scarlet & Gray Invitational at Miami Valley, pacing a mile in 1:53. The month of May proved challenging beginning with a ninth-place performance in the opening round of sires stakes.

“She tied up and had female problems again that day. That whole month of May I dealt with her having female problems and tying up,” Haynes said. “I would get one under control and the other would flare up.”

An abscess resulted in a scratch from her next scheduled start, and the pacer returned two weeks later to race fourth at Scioto Downs. Finally, she reclaimed her form in the second round of Ohio Sires Stakes. The couple’s first yearling purchase delivered Haynes’ first sires stakes victory as a trainer. Steered by Hunter Myers, Smothastenesewisky looped three-wide on the backstretch to take command and pulled away by four lengths on June 5 at Northfield in her $50,000 division, crossing under the wire in a lifetime best 1:52.

“The 3-year-old filly division is pretty tough. I’ve said that if she’s anywhere close to being right, she’ll be right there with them,” said the trainer. “I really don’t think she was all the way right, but I think she was pretty darn close.”

Bred by Robert Mondillo and Donald Robinon, the sophomore now possesses earnings of $109,981. Prior to claiming her first victory of the year, Smothastenesewisky employed her typical antics, biting Haynes and drawing blood as he prepared to sponge her off after warmups.

“My wife reminds me all the time, ‘You know this is my anniversary gift, you have to be nice to her,’” he said, laughing.

In any other stable, a first sires stakes win would be the most memorable event of the week. This time, the feat was overshadowed, sandwiched between the birth of the couple’s third son, Clayton, on Thursday, June 3, and the celebration of Aiden’s second birthday on Sunday, June 6. Brian and Mackenzie Haynes have their hands full right now managing three precocious boys and the gift of a feisty filly. They couldn’t be happier.