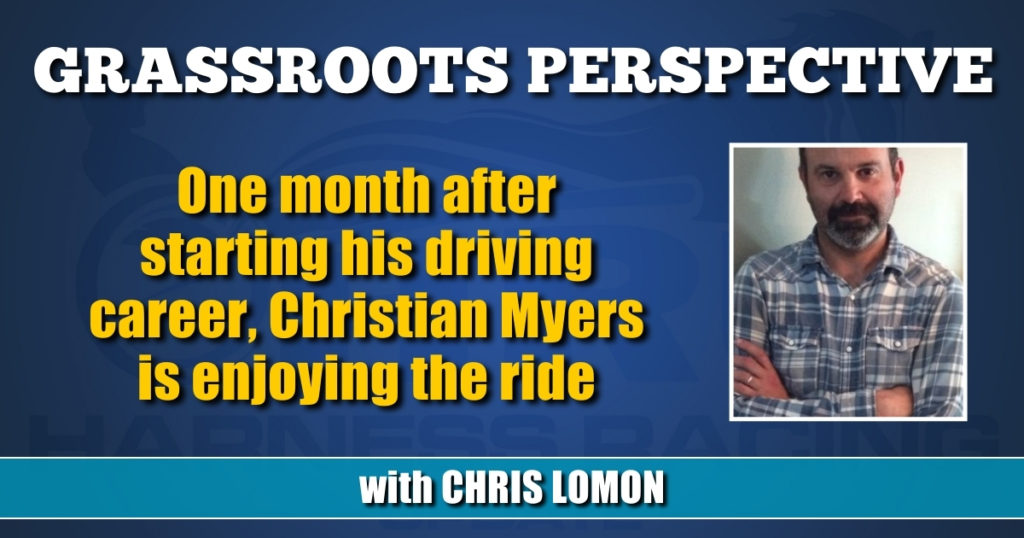 One month after starting his driving career, Christian Myers is enjoying the ride

The number of drives he has to his name is fewer than his 19 years and his first three starts yielded a pair of sevenths and one eighth-place finish.

Family ties, a first-rate attitude and faith in the benefits of hard work, have set the foundation for Myers to flourish in the race bike.

Chris Gooden | Christian Myers, 19, had his first pari-mutuel start in May at The Meadows.

“Right now, every warned me that this is the tough part, finding horses to drive, learning the ropes – but I understand that and I’m ready to face all of the challenges head-on.

His milestone first drive came on May 12 of this year, in race five at The Meadows. While it wasn’t a storybook finish – Myers and 3-year-old pacing filly Dash One crossed the wire seventh, it was more about the big picture rather than missing out on a winner’s circle photo.

“I had three horses to drive in one day. I went out there for that first race and I was pretty nervous. I was shaking a little bit, but as soon as we got behind the gate, it was like a switch was flipped. I was completely focused. After that race, I was nervous again, but just like that first one, as soon as you get behind the gate, you are dialed-in and ready.”

In the moments leading up to those trio of races, Myers recalled some helpful words he received from his father. He had heard the advice many times before, but on this occasion it was more meaningful than ever.

“My dad always told me two things that I’ve always kept in my head. He told me that the sky is the limit and, ‘Drive for checks and the wins will follow.’ He told me that if you set a horse up for a good finish, there’s a good chance you can be the winner. Right now, I’m in that stage where I have to worry about keeping the trainer happy and hopefully, driving the horse again the next week.”

The Pennsylvania-born horseman intends to make the most of any opportunities that come his way.

“My dad has a couple of horses that he let me sit behind. One horse I’m sitting behind, Jaspers Revenge… I like that horse a lot. There’s a cool story behind him. His dad, The FF Jasper, my dad trained him. He wasn’t a million-dollar horse, but every week, the more you drove him the tougher he was on the track. He paced in 1:51[.2, at Scioto, May 18, 2013] and had a nice, solid career. I think this colt is going to turn out just like him.”

Myers knew early on that he’d turn out just like his father in terms of his career calling.

When it came to mapping out his future, there was only destination he focused on.

“I love driving. It’s the only thing I’ve ever wanted to do my whole life. I’m just starting out. Every race, every qualifier, I’m learning something new, different techniques to make sure you get the best effort out of each horse.”

Myers has also been the beneficiary of helpful tips from some of the sport’s most respected reinsmen, pointers he’s eager to listen to and then include in his racing repertoire.

“A lot of drivers, guys like Tony Hall and Aaron Merriman, after the race I’ll go up to them and ask them for input. They are really good about talking to me, going through the race, sort of coaching me through it. That’s been really good for me. Every time I’m at the racetrack, I learn something new.”

Homework is a must, acknowledged Myers.

When he’s done at the races, his day is far from over.

After a bite to eat, the rookie horseman reflects on his drives, pari-mutuel or otherwise.

“I watch the race highlights and look for something I could have done differently, even if it’s something small. You just want to be as prepared as you can be. We qualify at The Meadows on Tuesdays, and the races are posted at 11:59 that night. My dad and I will stay up and sit down to watch the qualifiers. We’ll go over each one and he’ll give me excellent feedback.”

Just as he did the time Myers drove Hillbilly Fantasy on May 26 at The Meadows. The 3-year-old filly, bred by Hillbilly Haven Farms (VA), is owned and trained by his father.

Sent off at 28-1, the daughter of Dr Dreamy finished sixth, nearly 11 lengths behind the winner.

While the younger Myers, whose brown, orange and white driving colors are the same as his father’s, was disappointed at the outcome, the reaction that greeted him post-race lifted his spirits.

“My dad had a smile on his face… that just made me feel really good.”

Although he enjoys hunting and fishing, Myers would pass up any of those pursuits for anything related to racing.

The standardbred life has long been his primary focus.

“If I’m not driving, I’m talking with my dad about racing. I’m an avid outdoorsman, but for me my life is mostly about racing. I just graduated high school, but I didn’t really care for school all that much. I’m glad I got my diploma, but whenever I was in school, I’d always be thinking about driving. That was all I was really thinking about.”

These days, his thoughts, much like they were in the classroom, are channeled towards what he can achieve when he’s holding the reins.

Improving his skills, garnering more attention from trainers, and competing at more racetracks – Myers has his sights set on making a name for himself in 2021.

“I would like to get up to Northfield to race. I qualified there a few times, but I’d like to get a few drives there. Other than that, it’s all about learning and improving.”

Myers, just as he always has, will continue to dedicate most of his daily thoughts to life in the sulky.

“This is what I wanted to do for such a long time. Now that it came to be, I’m going to give everything I have to make it a success.”