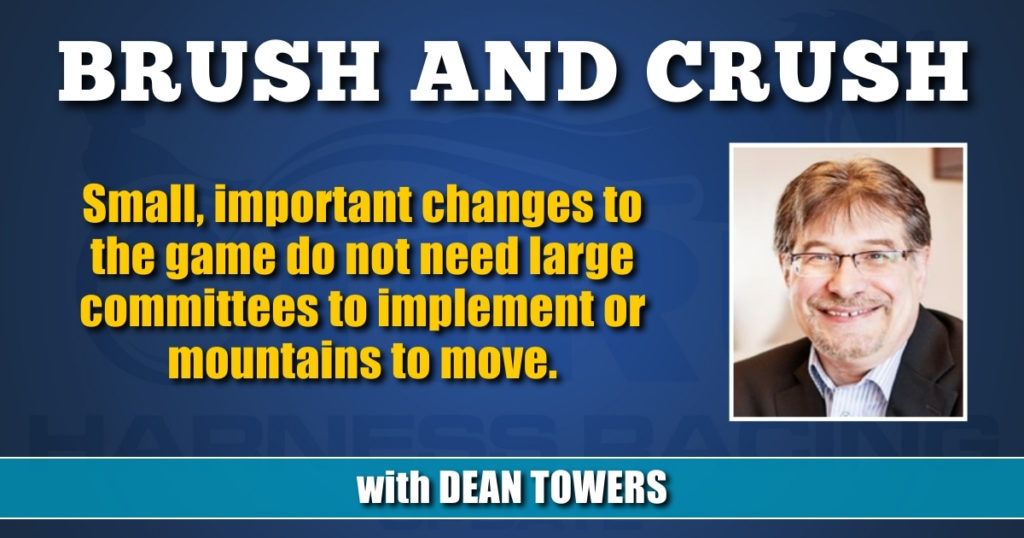 Small, important changes to the game do not need large committees to implement or mountains to move.

Amazon’s Jeff Bezos once said, “If you can’t feed a team with two pizzas, it’s too big.”

It’s one of my favorite quotes because it fits so well with large, disparate organizations like harness racing, where changes tend to end up in the dreaded “committee” – an amorphous group that would take a Domino’s franchise working overtime to feed. This sport (through its various fiefdoms) often tries to move mountains — the big things — which by their very nature are immovable.

Please let me highlight a couple.

The recently-concluded Meadowlands Working Group focused on the flow of the races, TV coverage, camera angles, on-screen graphics and the rules of racing; all with achievable recommendations to improve their product.

In addition, they launched an educational segment for new players, where they asked drivers about strategy, giving tucks, leaning back in the bike and various other points of (sometimes) contention.

There were no vote or motions that had to be seconded. It was all done over a couple of pizzas. (For more, see Meadowlands Matters).

Woodbine Mohawk Park is back at it this weekend (thankfully), and they too have some proactive changes in store.

Back in 2019, Woodbine tried scoring nine wide with a trailer, which according to my social media feeds at least, was panned pretty heavily. This year, they replaced that experiment with a new one. They’re back to 10 wide and they added a staggered starting gate (for numbers regarding The Meadows’ staggered gate see Harness Racing Update here).

Airlines are offering seat sales as the COVID-19 risk wanes and we’re seeing “reopening” sales in a lot of industries. Woodbine joined the fray and offered a 3 per cent rebate on dollars wagered this weekend.

Last but not least, Mohawk has been playing host to a massive number of qualifiers, showing them live on YouTube. Stale dates on the past performances are like sticking your customers in the eye with a hot stick. They’ve ameliorated this in a big way after this stoppage, and tonight’s (June 11) restart card looks eminently playable.

Woodbine’s braintrust did not have to call Ontario premier Doug Ford to implement any of this. They likely got a couple internal people together, with perhaps Bill O’Donnell from COSA, and shared a couple of pizzas.

Now, I am the first to admit that the initiatives I have highlighted will not double handle; harness racing will not be on cereal boxes or the nightly news next week. But these little things are important.

Henry Ford, when talking about the building blocks of assembly line engineering and the economies of scale they afforded, once said, ‘paying attention to simple things that others neglect can make you rich’. If it was good enough for one of the greatest businessmen the world has ever seen it should be good enough for us.

I encourage more tracks to share pizza and discuss what they can do better. Just make sure it’s not more than two.