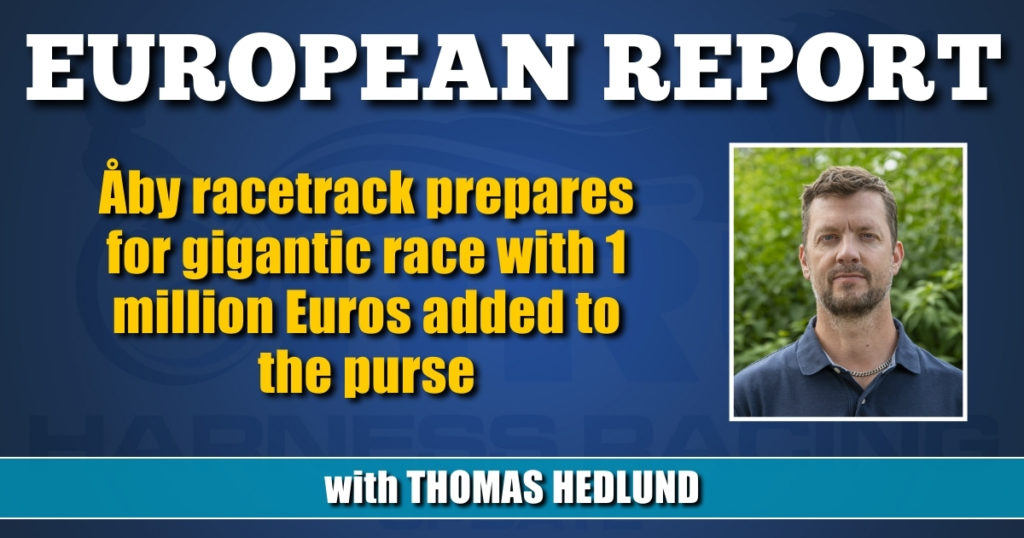 With 2024 as a debut year, Åby racetrack in Sweden will offer the harness racing world’s largest race for older trotters. One million euros will be put in the purse of the race called Åby World Grand Prix (Åby Stora Pris today) and the winner will receive a check of $726,500.

”We felt that we had to do something to lift Åby Stora Pris since it has become more and more difficult to attract horses and trainers from foreign countries,” said Åby’s sports general Jon Walter Pedersen to newspaper GT on Thursday morning (June 10).

Martin Langels / ALN | Ecurie D (Björn Goop, racing in Eskilstuna on July 15, 2020) has been exported to the United States to Ake Svanstedt’s Stable.

Pedersen also points out that no money will be taken from the overnight races, but the increased purse will be funded by sponsors, ATG and Åby’s own funds.

Every fourth year, Åby Stora Pris will become Åby World Grand Prix. The distance in the race is 3,140 meters today, but Jon Walter Pedersen isn’t sure about how it’s going to be in 2024.

“Most certainly we will change the distance in the race. A distance that attracts great horses from USA, but we don’t want to get back to a mile race, so the distance will probably be 2,140 meters (1.3 miles),” said Pedersen.

Ecurie D. (Infinitif) will be a new face in American races for older trotters this summer. The 5-year-old Danish-bred star, who was runner up in his Elitloppet elimination and sixth in the final two weeks ago, has begun his journey to the west.

The horse will enter Åke Svanstedt’s stable in the end of June and his flight from Europe begins on June 21. Five weeks of quarantine will follow for Ecurie D. when he arrives in the USA. His racing career is expected to resume at the end of July.

The prestigious $133,100 Oslo Grand Prix is scheduled at Bjerke racetrack on Sunday (June 13) and the race’s status has increased a bit since last year.

Normally, the Oslo Grand Prix is a $365,000 race, but due to COVID-19 and its side effects, among other factors, Bjerke had to lower the purse to $85,000 last year. Sunday’s race is ”bigger” than last year’s edition, but Oslo Grand Prix struggles with its ability to attract the best horses in Europe right now.

Ten horses will battle on Sunday afternoon over the distance of 1.3 miles.

Saturday (June 12) is the biggest race day for Östersund in northern Sweden, featuring the $169,500 Jämtlands Stora Pris as the main event.

Five-year-old star Hail Mary (Googoo Gaagaa) draw post 8 behind the car, but will still be the favorite in the interesting race where horses such as Brother Bill (From Above) and Missle Hill (Muscle Hill) are the toughest opponents.