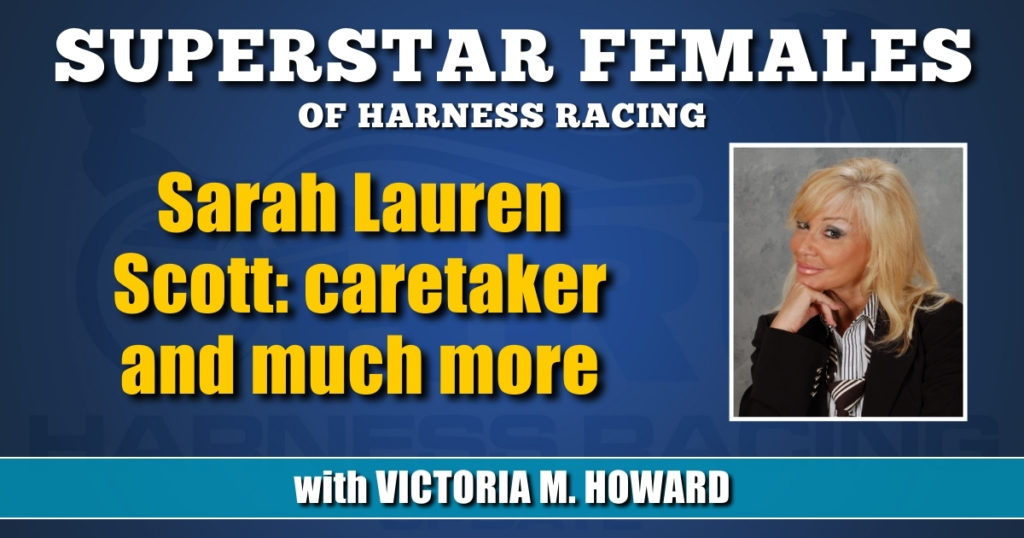 Born and raised in Halton Hills, Ontario, Sarah Lauren Scott has worked for some of the sport’s top conditioners, such as Brett Pelling, Mark Harder, Joe Stutzman, and Nifty Norman.

“Those who know me, know that I take things into my own hands and get things done. I guess you could say I began doing this at the early age of 7 when I came across an ad in the newspaper listing a horse available for part board, so I made an appointment to go and meet him and the rest is history,” said Sarah Lauren Scott.

“Horseman Joe Stutzman kept his turn out and lay up horses at the same farm where I was riding, and it wasn’t long before I found myself riding less and focusing on the care of the standardbred. My family was not involved in the business; however, they are now.

“My father worked for over 45 years in the police force and my mother completed her career in the school system. Looking back now, I cannot believe what they gave up for me to follow my dreams and am forever grateful for what they have given me.

“My parents can always be found by the rail waiting for me to lead out my horse.

“We’ve shared Breeders Crown victories together, as well as being ‘my support’ when my trotter Fork (who I owned and trained) would make a break. My father would be the first to say, ‘Let’s get ready for next week.’”

When Scott was 16 she spent the summer working for Joe Stutzman at Gaitway Farms in New Jersey.

“I took my job as a caretaker seriously and developed a work ethic that I apply to everything I do. I don’t stop until it’s done.”

Besides a caretaker, Scott has been involved in the racing industry in many ways, as she’s worked for Joanne’s Staking Service and the Ontario Standardbred Adoption Society (where she actually placed 67 horses in new homes the last year she worked as the program coordinator).

“I very much enjoyed working at the staking service. To me it was very exciting, yet very stressful with the deadlines — but rewarding.

“The Standardbred Retirement is something I strongly believe in. I was the vice president for three years there before I ended up as the program coordinator.

“I was also the track photographer at Grand River Raceway and worked at System Equine where I designed custom stalls, barn layouts and fencing solutions.

Working under some of harness racing’s top trainers, Scott has been blessed to have been the sole caretaker for many top horses — two being world champions Rocknroll Hanover and Syrinx Hanover.
“These horse are beyond special. Syrinx was my girl – she was everything. She really took me to the next level, though by no means was she easy. She without a question was the one who made me the caretaker I am today.

“I remember the day as of it were yesterday. Nifty Norman (while working for Brett Pelling) had horses coming up from New Jersey to the Canadian barn and asked me if I wanted Hez Striking or the ‘wild 2-year-old.’ I told him I would leave it up to him — hoping the open trotter would end up in my stall; but he didn’t. Instead, it was Rocknroll Hanover — the ever so smart 2-year-old who ended in my stall.

“We became inseparable. Rock was all class and it still makes me feel emotional thinking about him. To me, he was perfection and wish he could be here today. To my knowledge he is the only horse in harness history to win three one-million dollar events, and the first 2-year-old to break the first sub 1:50 mile. What I would give to live 2005 over again.”

People who know Scott know her first true love was a horse named Music Director, whom she fell in love with as a child while working for Stutzman.

“Music Director was a kind, gentle gelding that taught me the ins and outs. He was the horse I dedicated all my time to and I was heart-broken when he changed homes.

“Being so young I didn’t understand the full capacity of buying and selling racehorses. Remember, at that time there was no social media and you had to work to keep a horse on your radar, and I did just that.

“Music is now 32-years-old and living and loving his best life with my trotter Fork at a farm in Milton, Ontario. (During his racing career Music earned $960,254).

“The day Fork crossed the finished line first in 1:53.4 was the happiest day of my life. He is ‘a box of chocolates’ for sure, and has a best-selling story to tell in his own right. He is now 12 years old and will be forever under my dedicated care. Fork was the $900 yearling that gave me the ride of a lifetime.”

In June of last year, Scott made the choice to move to New Jersey to expand her career. Today, she works full-time as a respiratory specialist for Nortev Flexineb of Ireland. As a key member of the Flexineb team, Scott brings an unrivalled knowledge of the harness racing industry.

“Sarah possesses a warm, pleasant and knowledgeable personality — all traits that help veterinarians, trainers and owners in their uses of technology,” said Gavan O’Sullivan of Nortev.

Launched in 2013, Scott created SLS Equine, which has become one of the leading suppliers of custom horse equipment. Her equipment has been worn by many champions, such as Captaintreacherous, Lather Up, Atlanta, Ramona Hill and many more.

“I have worked so hard creating the original printed brow bands and buxtons, and my work speaks for itself. Every detail is as important to me as the last. I design equipment to last, be comfortable, lightweight and personalized.

“I formed Platinum Equine Services with focus to horse health. I have a very strong team that works with me in Canada and the USA. We have therapeutic products available to help equine athletes reach their fullest potential. Our feature devices are the Flexineb and Bemer therapy system. We offer direct sales, rental, full education, support, and direction to ensure that horses are healthy and happy. (Other products are also available).

Scott’s professional pursuits have received outstanding endorsements from some of the sport’s top trainers.

“Sarah has a love for the animal that makes her the complete horsewoman,” said trainer Tony Alagna. “She understands a trainer’s needs and goes out of her way to put the horse first, which in turn makes a wonderful experience for myself and my clients.”

Scott said she has dedicated her life to the harness racing industry.

“Three years ago I formed and created National Caretaker Appreciation Day at Mohawk that has gone Canadian wide.

“It was a hue success and I’m happy to know they carry on the recognition for all Canadian caretakers. The caretakers in the sport are the unsung heroes that are not given enough credit and glory for what they do.

“Appreciation and acknowledgment will go a long way in whatever you do. Each caretaker has responsibilities that deserve to be credited.”

Scott is by far one of the most dedicated and hard working horsewomen in harness racing. However, three years ago she was dealt a blow that would forever change her life.

“December 2018, I received a phone call in the middle of the night that forever impacted me. First Line Training Center (Barn 7) where my horse Fork was stabled was on fire. This is every horsemen’s nightmare.

“Because of this horrific situation, (my friend and firefighter) Riley (McGilloway) and I incorporated a barn fire prevention and education program called HINDSIGHT, which entails public events, hosting seminars, and training first responders. We are dedicated and committed to do our best preparing and educating as many people as possible to ensure they never receive that phone call.

“I have been quite fortunate with the opportunity to follow my passion, and will continue to stay involved in the harness racing industry. I enjoy spending time with the horses of Pit Bull Stable and love them as my own.

“There is not a better feeling then seeing the yearling you have selected go behind the gate under the lights the first time. I still get that rush.”