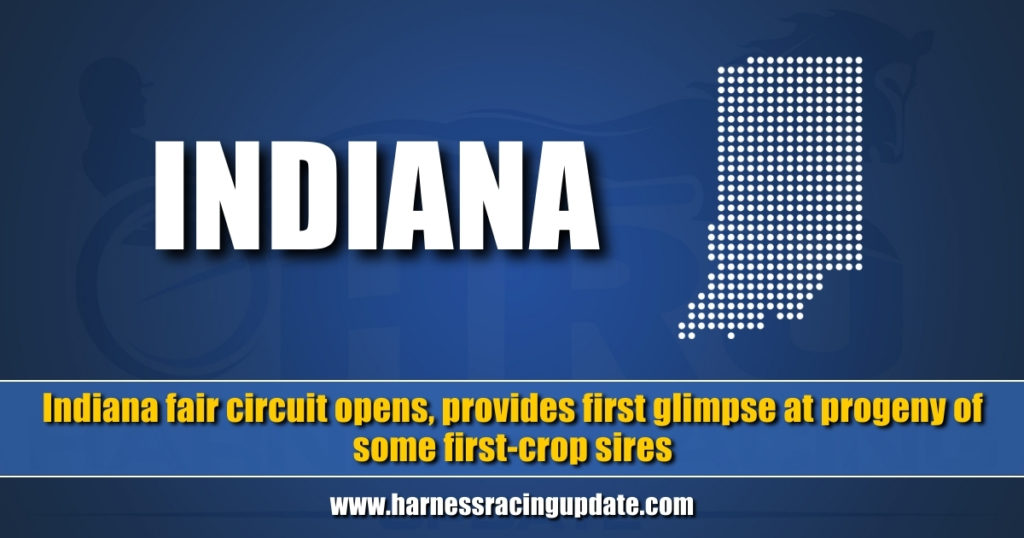 The first week of June in Indiana marks the beginning of fair racing. Often, the opening stops on the fair circuit provide an early look at this season’s 2-year-old crop, particularly the first progeny from a sire new to the Hoosier State. The initial program of the season was slated for Thursday (June 3) at Converse, IN, but was cancelled and carried over to the following day. As a result, the Miami County Fair offered a double feature Friday (June 4), with 31 races carded. Billed as the Governor’s Cup Racing Series, this pair of programs kicked off a schedule which includes 35 dates scattered over 10 locations throughout the state, concluding in October.

Doug Rideout, a perennial top driver and trainer on the Indiana fair circuit, reached the winner’s circle more than any other horseman on the day. The Winchester-based conditioner sent out 10 winners, each of which he also steered. In addition, he picked up two more victories as a catch driver. Six of Rideout’s scores came with freshman trotters seeing their first racing action, with four representing the highly-anticipated first crops of Crescent Fashion and Dover Dan.

Crescent Beauty captured the first race on the second program at Converse which featured 11 trotting events. Rideout guided the Crescent Fashion—Overt filly through a gate-to-wire performance, winning in a time of 2:11. The freshman is owned by breeder Peter Schmucker Jr. and Rideout’s wife, Julie. Lonestar Fashion, a gelded son of Crescent Fashion, recovered from an early break to win by nearly five lengths in his $3,000 division. Bred by Lonestar Stables, the 2-year-old is owned by Julie Rideout and John Graber. Crescent Fashion was also represented by three runners-up on the card.

Hot Dan, another of Rideout’s winners, was one of four freshmen from the first crop of Bluegrass Stake winner Dover Dan to claim victory. The homebred gelding, out of Glide Sally Glide, is a half-brother to Indiana Sires Stakes champion Just Jess 4, 1:54.4f ($352,354). Bred and owned by Alan White, Hot Dan circled the Converse oval in a time of 2:14. Filly Dover Dance turned in one of the fastest miles of the day for young trotters. Piloted by owner and trainer Greg Runyon, the Dover Dan-Antsy Dancey lass stopped the clock in 2:07, matching the time turned in by Jailhouse Jesse filly Tori Tori one race earlier. A trio of Dover Dan babies also registered runner-up performances.

Four divisions were offered for sophomore trotters; two for fillies and two for colts. Northern Rocks, a Guccio—Matriarch gelding, turned in the fastest mile of the four splits. Trained and driven by Alvin Miller, the homebred, owned by Martin Schmucker, took control from post three and trotted away by more than eight lengths in a time of 2:01.2.

On the pacing side, three freshmen from the first crop of Breeders Crown champion Luck Be Withyou collected wins on the first card of the day. Luckychris, the first foal from six-figure earner Diamond Amber, produced the fastest mile of the day for 2-year-old pacers. With Clifton Bell in the bike for Curtis Rice, the colt received every call on his way to a 13 and one-half length romp, tripping the timer in 2:00.2. Bred by Cletus Christner, Luckychris is owned by D and R Racing Stable. Luck Be Withyou’s other winners included gelding Luckbewithalex (2:03) and colt Be A Lucky Star (2:04.3).

JK Endofanera’s first crop made a big splash in the Hoosier State last season, and three collected victories in five events for sophomore pacers. Frontier Metis registered the quickest mile, pacing the circuit in 1:57.3. Mike Hollenback owns and trains the gelding, bred by Frontier Farms. The sophomore was driven to victory by Charlie Conrad. Filly Jk’s Shining Star turned in a 1:58 performance for trainer Peter Redder. Bred by Victory Hill Farm, the three year old is co-owned by Redder and Therl Hensley. Rideout steered the pacer to victory for one of his two catch driving triumphs.

The sire was also represented by a pair of freshman winners. LeWayne Miller sent out filly Ever A Jk to a 2:01 score. Bred by Fred Wittmer, the 2-year-old is owned by Wittmer, L & S Racing and Kevin Lambright. Lambright steered the pacer to victory. Filly Zig Zag Zoom left the field in the dust in her $3,000 division, drawing away by 14 lengths at the wire and recording a 2:06 mile. Conrad trains and drives the homebred, owned by his wife, Sarah, and children, Carson and Carder. The freshman is out of the mare Zoom Past You, who took a 1:52.3 mark at three with just shy of $180,000 in earnings.

With the opening round of freshman Indiana Sires Stakes set for mid-July, the first of many two year olds logged qualifying miles Saturday morning (June 5) at Harrah’s Hoosier Park. Callmesue, one of two young trotters to line up behind the starter, finished second in her attempt. Owned, trained and driven by James Yoder, the Dover Dan—Lisas Mission lass covered the mile in 2:00.3 and kicked home in :28.2. JK Endofanera colt Soaring Now wired the field and won by nearly 12 lengths in his qualifier for trainer Aaron Stutzman. Stopping the clock in 1:56.2, he was followed across the line by fellow freshmen Bestaluck (Luck Be Withyou, 1:58.4), Martz Creek Luck (Luck Be Withyou, 1:59) and Running On Faith (Fred And Ginger, 1:59.3).