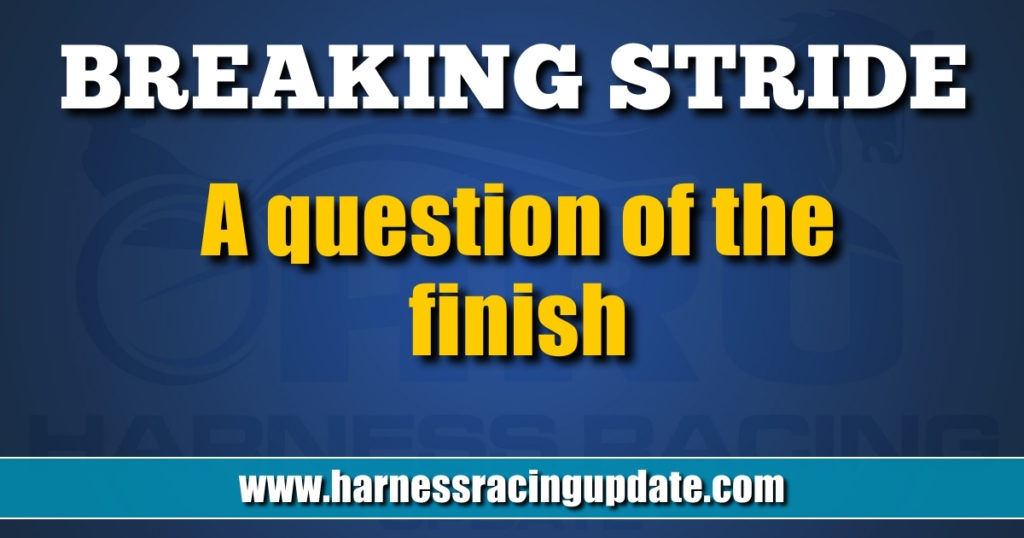 A question of the finish

Sitting in a red wire chair at a round outdoor table at the Has Beans Coffee Emporium, he took a sip of black coffee, set his mug down, and said, “You don’t talk about your wagering exploits as often as you used to.”

I sighed. “It took me a while, but I realized people are not especially interested in listening to tragedies.”

He nodded. “Most of your racing reports do seem to involve losing photo finishes, broken strides, mysterious juices, lousy drives and locked wheels.”

I sipped my double cream and triple sugar, smiled, and said, “Dude, you can’t call yourself a harness horse handicapper without scapegoats and villains. In wagering on horse racing, it is always somebody else’s fault. Heck, a few of my pals have not picked the wrong horse since 2002.”

“And yet, you remain a player.”

“Yeah, but Trey doesn’t play the races as much these days.”

“I never was a good handicapper, and I’m getting worse.”

He took another sip and nodded. “Math and logic are skills best learned at a young age.”

“I can handle math. I took ninth-grade math three times.”

“Then what’s your problem?” he asked.

“I could never overcome my psychological quirk.”

“I have a part of my psyche that prevents me from wagering on a favorite, and in harness racing, some racing cards have plenty of heavy favorites that win plenty of races. Trust me, pal, in the real world of horserace handicapping, tossing every favorite in every race is a recipe for disaster.”

“Interesting. Maybe, deep down, you are always trying to prove everybody wrong, everybody being the smart money.”

I shrugged. “Smart money may be an oxymoron in horse race wagering. But really, what is the fun in cashing a ticket on a horse that goes off at 1-9 and wins by ten lengths?”

“Not for me. To me, winning a race with ridiculous chalk in a race would feel like cheating or aiding and abetting a crime.”

“With that type of emotional bias, it’s probably good that you are no longer wagering with enthusiasm, but I understand where you are coming from. Deep down, most of us want the world to be fair. We want everyone to have an equal shot.”

“I have another theory.”

“You have a thousand theories.” He said.

“Maybe the reason I put my money on longshots is that in my mind, I have less to lose when my horse loses and a lot more to gain if it pulls off an upset.”

He nodded. “Getting more joy from unexpected successes than expected ones is theoretically logical. However, the logic fades fast when you are trying to make money.”

“I KNOW that. Gambling on horse races with my heart instead of my head is ridiculous, and cashing tickets on longshots seems to have gotten more difficult the past couple of years. Favorites seem to win more often. And these chalky dynamics have pushed my gambling from lousy to hopeless.”

He cupped his hands around his white mug, leaned forward, and said, “Maybe the powers that be should make the races more competitive. How difficult can that be?”

“Very difficult. Racetracks tinker around with different distances, postpositions, and classification systems. Nothing seems to stick.”

He paused and then said, “I’m from the technology world, but I will tell you this, the people who set up the races could use data from the 100 horses entered in a horse program and set up very competitive races if they wanted to.”

I explained, “Race secretaries, the people who set up races are called racing secretaries.”

“If race secretaries had the freedom to shuffle gaits, drivers, postpositions, distances, and handicap starts, they should be able to spit out a dozen races that would not have a single prohibitive favorite or a single hopeless longshot.”

I said, “Top drivers, trainers, gamblers, and owners would rebel.”

He asked, “Is your sport for drivers and trainers? Is excitement better than monotony? Theoretically, where all horses have an equal chance in this system, the top drivers will be revealed, making great drivers more important. Suddenly, the human becomes more important, which is a great dynamic because people are relatable.”

He spread his hands. “To be determined. The margins and handicapping factors will be smaller, but every race WILL have a winner, and the return on investment could be much more significant.”

I sighed deeply. “A whole new earth-shattering, revolutionary world. I see one big problem. Half, no, make that 90 per cent of the harness racing hemisphere will have heart attack should races ever be manipulated as you are suggesting.”

He stood and reached for his jacket dangling from the back of his chair, “Yeah, but it could be a remedy for your psychological attraction to hopeless longshots.”