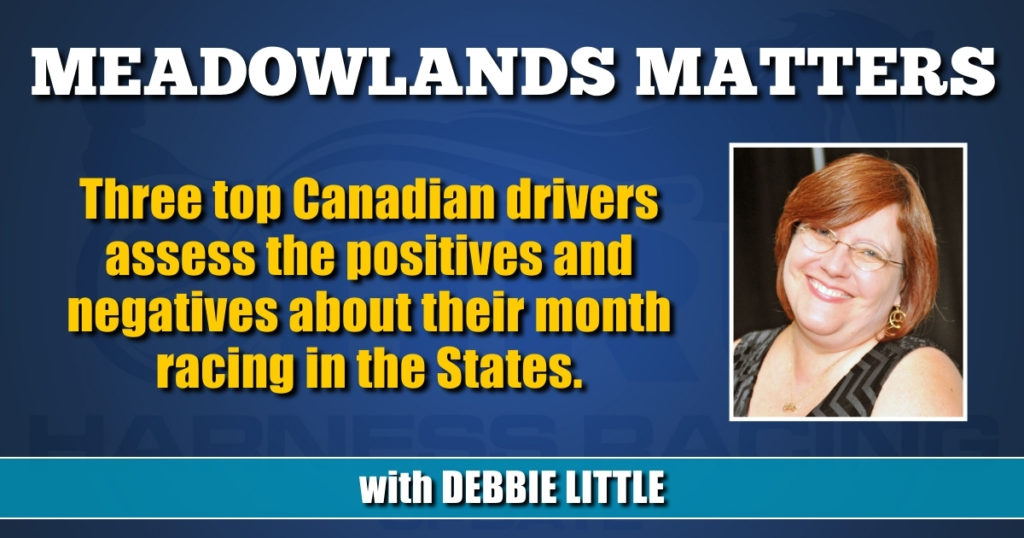 Three top Canadian drivers assess the positives and negatives about their month racing in the States.

Ontario’s not Kansas, but for three drivers there’s no place like home.

“I kind of already knew, but it definitely solidified my opinion of just how good we have it in Ontario. These guys work way too hard,” said Bob McClure with a laugh.

McClure, James MacDonald and Doug McNair arrived at The Meadowlands in late April and have appreciated their experiences while waiting for Mohawk to open back up.

“It was good to see how you stack up,” said MacDonald. “If I’d come down and gotten run out of here in two weeks, it would have been pretty disappointing, but I was going to make it a good time no matter what happened on the track. I had some luck and it’s a good measuring stick, I guess.”

All three currently are in the Top 25 in The Meadowlands’ driver standings, with MacDonald and McClure tied for 21st and McNair checking in at No. 14.

“I always wanted to try it down here and see how I’d make out and I was fortunate enough to get a lot of drives and it worked out,” said McNair. “It’s good for everybody. It’s good for my confidence and it’s good for the guys that put me up.”

MacDonald and McNair both drive regularly for trainer Carmen Auciello back home and he was only too happy to have them do so at The Big M as well.

Auciello sent down 10 horses from his Canadian stable and thinks every one of them had a profitable month of May.

“That’s why I’m pretty proud of myself and those guys as well,” said Auciello. “We showed them that we can compete down here. I think Dougie had 30 wins in May and that’s a big month for any driver. James won four or five races for other trainers as well and he won – I think – 11 for me. So, it just kind of shows we can do this. I think it’s something to be proud of anyway.”

In addition to his four Meadowlands wins, MacDonald also scored at Pocono and Yonkers, bringing his total to 17. MacDonald paired with Auciello for 13 of those victories and the duo hit the board 45 per cent of the time.

MacDonald has drives in 10 races at The Big M tonight (June 4), three of which are for Auciello. He also has one drive for Auciello on Saturday from seven on the card.

McClure had winning stops at Freehold, Harrah’s Philadelphia, Pocono and Yonkers for a total of 15, including four at The Meadowlands. Luc Blais was the trainer for eight of those wins.

McClure will be lined up next to MacDonald in seven races tonight, none of which are for Blais.

McNair was the busiest of the bunch, racking up over 300 starts between Harrah’s Philadelphia, Pocono, The Big M and Yonkers. He won 13 per cent of the time for a total of 40 with 11 at The Meadowlands. He teamed with his dad, Gregg, for eight and also had a one for Auciello.

McNair’s talent on the track apparently made an impression on others, including among them a Hall of Fame trainer.

“Nancy [Takter] said something to me,” said McNair. “‘My dad’s been watching you. He’s been watching you pretty closely and he said you fit in pretty good here and he thinks you should stay.’ I’m glad to hear that from [Jimmy Takter].”

McNair is already making his way north and MacDonald hopes to be doing the same shortly.

“I’ve got a couple of days to decide what’s going on but probably after this weekend I will not be back unless a good horse comes along,” said MacDonald.

“It’s not set in stone, but I would like to be back for the 14th [Mohawk’s opening day] to be able to race,” he said. “To do that, I would have to leave the States on the 9th of June. But, obviously, I’ll have to check the stakes schedule. If one of Luc’s horses has a big stake that week, I might have to prolong going home temporarily. [Getting vaccinated] was one of the best parts about being down here. Down here, you wait four weeks, and at home, you wait four months to get your second shot.”

Although the majority of their trip was positive, there is definitely something they will not miss.

“It’s not the driving horses that makes you tired, it’s the driving to and from every track,” said McClure. “Me and Doug were laughing that we feel sorry for ourselves if we have to drive a half-hour or 40 minutes to Flamboro Downs or Grand River. It just ruins our whole month.”

MacDonald said he’d always heard people talk about how far away from the track everyone is, but never believed it could be that bad. Having experienced it first hand, he has a greater appreciation for his commute back home.

“I learned the roads are a lot bumpier here than they are in Canada,” he said.

For the first time since the pandemic started, Chef Dennis Sammarone will be back in the kitchen today (June 4) for the return of buffet dining to both Trotters and Pink Restaurant.

BREAKFAST WITH THE BABIES

Breakfast With The Babies starts at 9 a.m. on Saturday (June 5) with 11 races amidst three qualifiers. Edison Hatter, the 21-year-old voice of Freehold and Rosecroft Raceways, will be calling the action.