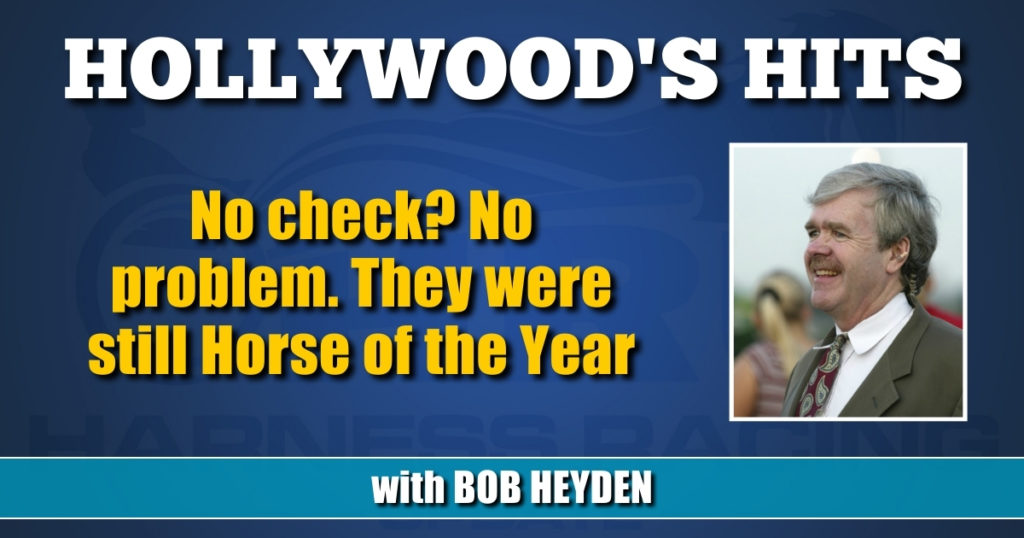 No check? No problem. They were still Horse of the Year

The following stubbed their toe once or twice, but they still were voted Horse of the Year. Let’s take a look at the rare down moments for these stars:

Abercrombie answered the call an amazing 33 times in 1978, so he can certainly be excused for any minor mishap. He was seventh in the Gaines at Vernon Downs on July 28 and eighth in the Jug final on Sept 21, but finished the year 33 22-6-3, with then-record earnings of $703,260.

Rainbow Blue was 20-for-21 in 2004 and edged out Triple Crown winner Windsongs Legacy for HOY honors. Her only blemish in a year in which she earned $1,195,010 came with an untimely break in the Mistletoe Shalee on Hambletonian Day.

Niatross missed a single check in two years falling over the rail at Saratoga on July 5, 1980 in the Battle of Saratoga.

Moni Maker had afib in 1999 during the Titan Cup eliminations and was eighth, but went on to be HOY for the second straight season. She was 21 14-43-2 and earned $1,494,972 in her bruising 1999 campaign which saw her set an earnings mark that stood until Bee A Magician broke it 14 years later for a female trotter.

Shartin N missed the board from post 8 in a Matchmaker leg in 2019 during her HOY season.

Cam Fella had two sevenths in 1982 at age 3 — the Spring Championship Final at Los Alamitos and then again in the Meadowlands Pace elims; April 23 and July 9, respectively — and then did not miss the board ever again.

Staying Together was 26 21-2-0 as a 4 Year Old in 1993 for Bob McIntosh, a strong HOY season which featured a 1:48.2 win in the Haughton final. He was seventh in the Tricentennial, his only missed check.

Mack Lobell was eighth in the 1987 World Trotting Derby during his HOY season. He started up late — on June 30 after a 20-start freshman season.

HOYs that raced in another barn the year prior

Staying Together and Moni Maker both started elsewhere before landing with Hall Of Famers Bob McIntosh and Jimmy Takter, respectively.