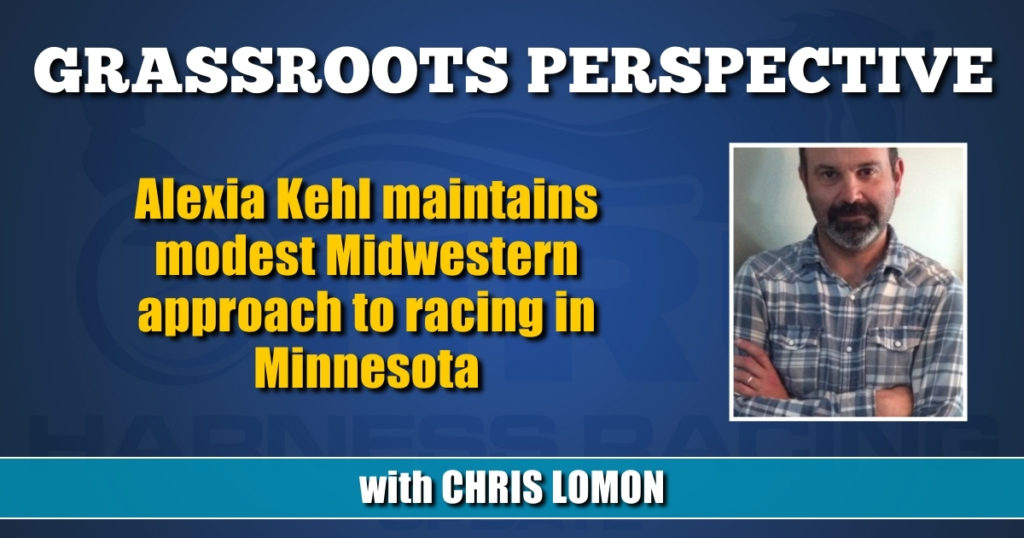 Alexia Kehl might not know the reasons for her standardbred success, but the Wisconsin-born trainer isn’t exactly preoccupied with finding an answer.

Her personality, like her stable, is modest. Whether it’s speaking about herself or her horses, Kehl doesn’t talk a big game.

“I try to stay humble and take everything as it comes. I don’t really talk my horses up. When they do well, I don’t want to come off as though it’s a surprise. It’s nice that over the years I’ve had owners come to me and give me horses. They see something in me. I try to treat them all like good horses. I do what I can and at the end of the day, it’s up to the horse to finish the race. If I have a bad night of racing, I’m sad for a couple of minutes and then I ask myself what I can do differently.”

Whether it was fate, good fortune, or something else altogether, Kehl decided to give the racing world a shot just over 13 years go.

She’s glad she did.

“I started out as a groom for Rick Magee. I just stumbled upon the job. I was working two jobs at the time and was in college, and Rick mentioned that there was a racetrack opening up in Minnesota and he needed help. Ever since I was little, I had horses. I never thought I’d grow up to be a horse trainer, but here we are.”

After years working for Magee, and other trainers, including Erv Miller, and time spent at racetracks in Pennsylvania and Indiana, Kehl found herself back in the Midwest U.S., specifically, Iowa and Minnesota.

Win or lose, she finds herself in a good spot these days, heading a competitive stable and running the show on her own terms.

“I remember an older gentleman, who had horses with Rick Magee, when I first got on the trailer to ride to Minnesota, he said, ‘Once you get this sport in your blood, you’ll never get rid of it.’ I didn’t really think too much about that at the moment, but he was right. I’m still here and I’m still enjoying it.”

Horses such as Goody Two Socks are a big reason why Kehl remains a fixture in the industry.

The pacing son of Relentless Yankee delivered the conditioner several victories over his 111-race career, including his final trip to the winner’s circle on September 28, 2018, at Cannon Falls, MN.

“I had him for about four years. He was one of my favorites. Unfortunately, due to health complications, he passed away. I really enjoyed working with him. He was one of those horses that always gave an honest effort.”

Kehl has also developed a penchant for having a fair share of Minnesota-bred trotters in her barn each year.

The 32-year-old isn’t quite sure how it came to be, but she gladly embraces the challenge.

“I don’t know how it happened. My first Minnesota trotter, a 2-year-old filly, was a Minnesota champion. Ever since then, people continue to give me trotters. They joke that I’m a trotting barn. I actually have two pacers this year, but I have six trotters, a mix of 2- and 3-year-olds. I don’t know if I’m a glutton for punishment. Trotters, they can make you want to rip your hair out at times, but with the program here at Running Aces, if you have a horse that can stay flat and be competitive, you can make some money. Being a smaller stable, it’s nice to have that.”

When she’s not training her band of racehorses or watching them compete at Running Aces, Kehl takes advantage of any downtime to take her mind off racing for a little while.

How she achieves that goal, however, is somewhat ironic.

“I have a retired standardbred that I like to ride. The last two years we went down to the Ozark Mountains and rode there. That’s been nice. It’s sort of my vacation for about a week. If I’m not doing that, I just enjoy hanging out with my friends or I try and get back to see my family in Wisconsin. You try and make the most of the time you do get away from the races and try not to think of the horses too much, but here I am, still hanging out with the horses.”

As for challenges she’s faced in her career, running a solo operation can be, at times, quite demanding both mentally and physically. So too can be the hurdles the horse racing industry constantly faces.

Still, it remains a labor of love for Kehl.

“I’m doing this by myself, so it can be tough. There are times where the uncertainty of the sport creeps into your mind too. I consider myself very lucky to be doing this job and to get to be around the horses. I guess if something ever happened with the sport, I’d be able to say I got to do something I love. I really don’t know what else I’d want to do. I think about that all the time.”

“I really like breaking babies, starting them out. That’s my favorite part of my job. You have to dedicate a lot of time to them and you also have to patience, but it’s extremely rewarding. It’s exciting to see when they learn something and they begin to put all of those lessons together.”

While Kehl continues to educate herself on the art of conditioning horses, she won’t dedicate much thought as to why she remains a go-to for owners.

Whatever formula for success that she’s found, she’s happy to keep rolling with it.

“I had friends that would ask me to train their horses and I was glad to do it. But when other owners started asking me to take on one of their horses, I began to really have that faith I could do a good job. That’s kept happening year after year, so I’m very grateful. I don’t question why it’s worked out that way. I just think, ‘I’m doing it.’ I guess I must be doing something right.”