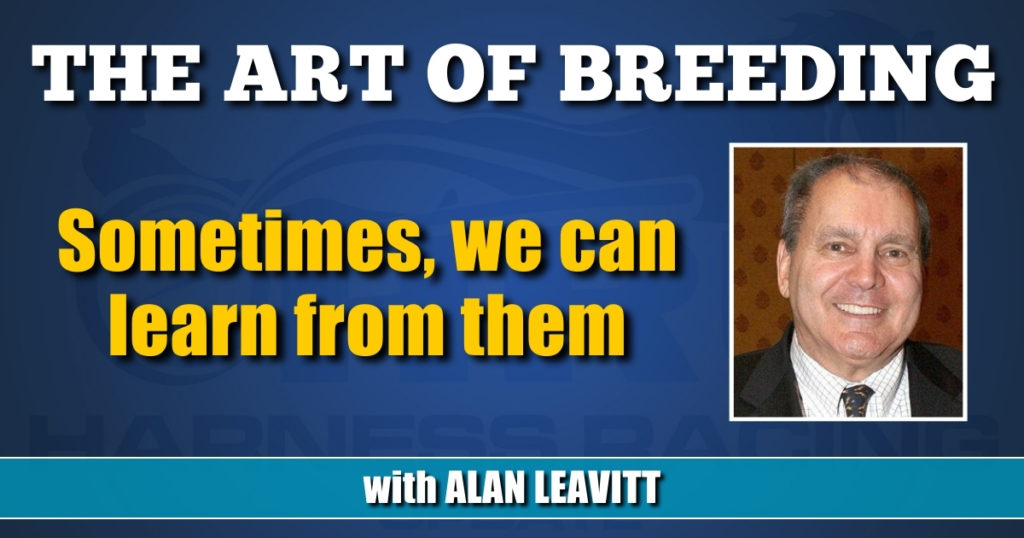 Sometimes, we can learn from them

There’s a lesson to be learned from the saga of the thoroughbred stallion Protonico, the sire of Derby winner Medina Spirit.

Protonico was bred and is still owned by Oussama Aboughazale, who believed in his horse when nobody else did. Protonico was a good racehorse who won seven of his 16 lifetime starts and earned $997,587. But everything about his racing career just missed by a fraction the standards that the running horse people go by.

For starters, he never won a Grade 1 race, although he was second and third in two of the big ones. That counts for a lot in the thoroughbred biz. In their eyes, a Grade 1 winner has every right to be a sire; a horse who finishes second, by half a length, should find useful work as a teaser.

That subject, graded stakes, is also relevant in our sport. North American harness racing is the only major horse racing sport that doesn’t have graded stakes. We should have them. Either the USTA or the Hambletonian Society should get it done. I can suggest one person who could easily do it, assuming he was offered a fair price for his services. That’s Steve Katz, and I’ll be happy to give his contact information to anyone who wants it for this good purpose.

Parenthetically, I don’t hold out much hope for this to happen. Despite making a strong case for haltering foals on their first day and leading them everywhere their dam is led, every foal picture I see is sans a halter. Many years ago there was a cartoon in the long gone Harness Horse magazine. It showed a young woman journalist interviewing a grizzled old timer in his faded colors and soft hat.

The caption above the journalist was: “Well, old timer, I guess you’ve seen a lot of changes in your time.”

And above the old timer: “Yep, and I’ve been against every one of them.”

But back to Protonico, and his star crossed son, Medina Spirit. Both Federico Tesio and this kid believe that 2-year-old brilliance on the racetrack is the best indicator of future sire potential. Protonico wasn’t brilliant at 2 when he made only two starts. He won the first one, a maiden race, and then he came back to be sixth in a minor stakes race. He then went on to win four Grade 2 and a Grade 3 stakes at 3 and as an older horse.

Protonico bounced from farm to farm when he entered the stud. Standing for $6,500, he stood at Taylor Made Stallions the first year, Darby Dan Farm the second, and then Castleton Lyons the third year, where he’s been since 2019. Until now, the great majority of the mares in his small books were owned by his owner, who kept putting his money, and his mares, where his mouth is.

In his first year, Protonico was bred to 30 mares, from whom he got 19 live foals. From that limited foal crop Protonico not only got Medina Spirit, but he also sired the top filly, Princess Noor, who won the Grade 1 Del Mar Debutante Stakes and the Grade 2 Chandelier Stakes.

Although the bookings are now flooding in for Protonico, there’s still a question in this kid’s mind about what kind of sire the horse really is. The dams of both of his two stakes winners are well bred. It’s possible that both of those mares just happened to come up with genetic face cards at the same time Protonico did the same, through the genetic luck of the draw. Or, the other possibility, that Protonico is so potent that he throws high cards all the time, and anytime his mate matches him at least part way, you’ve got a top horse as the result.

Obviously, only time will tell, although the crop that results from this year’s breeding season will give Protonico the first true test of his sire ability. For my part, I like his chances.

This brings up two subjects related to our business. When Jim Harrison worked for me at Lana Lobell, I once asked him how he did the matings when he was running the Hanover Shoe Farms.

“I always did the mating that would produce the highest-priced yearling,” Jim told me.

In case anyone’s interested, that’s how this kid has always done it, too. And it’s a method I recommend. The economics of our business today don’t allow for genetic experiments, and breeding for the most saleable yearling will also produce the best racehorse, at least most of the time.

I am, however, aware of a parallel instance to Protonico’s support by his owner in our own business. In this case, the stallion owner is Bill Donovan, one of the smartest people I know. His stallion Cattlewash, a son of Somebeachsomewhere, takes his name from a famous beach in Barbados. This year, at 4, Bill has bred 16 of his own mares to Cattlewash. All of them are well-bred. From whatever number of live foals result, I believe Cattlewash will have a fair chance to prove he can be a top sire, if indeed, he is a potent stallion.

I’m not trying to write an ad for Cattlewash, and indeed there’s really nothing to advertise as the horse isn’t standing for public service. My point is that a real sire can prove himself with a limited number of foals, just as Protonico did with his crop of ’19.

Again, time will tell, as it does with all things, sooner or later.