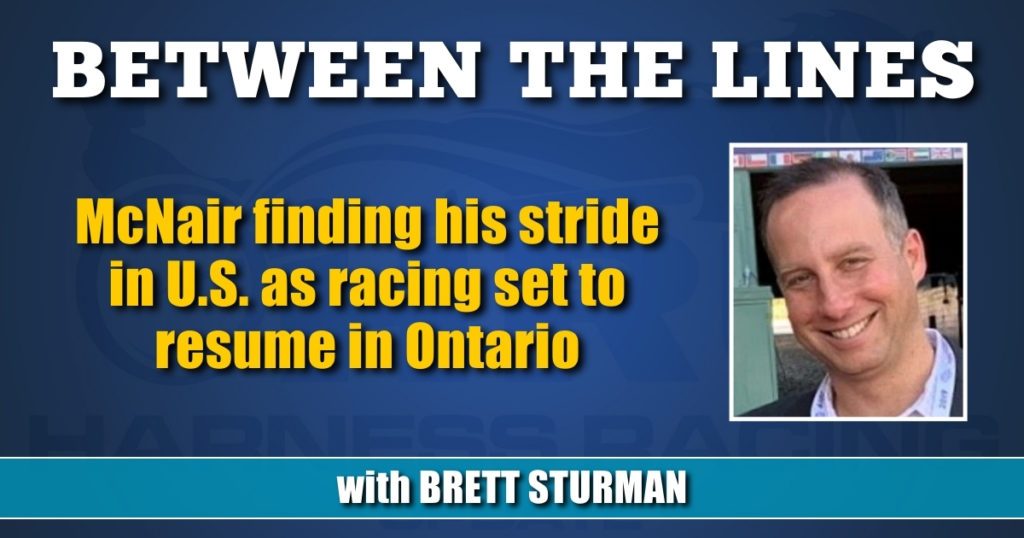 McNair finding his stride in U.S. as racing set to resume in Ontario

The announcement this week that live harness racing is set to resume at Woodbine Mohawk Park on June 14 as part of the Ontario government’s reopening plan is likely to end the experiment of the Canadian-based drivers as regulars at harness tracks throughout the U.S. In preparation for the resumption of racing, Woodbine Mohawk Park is set to conduct three straight days of qualifiers beginning on Thursday, May 27. The announcement comes at a time when some of the Ontario drivers were just starting to get their feet under them, including driver Doug McNair.

McNair arrived at the Meadowlands nearly one month ago, and since that time he’s been a regular at not only that track, but performing daily routine doubleheaders between Harrah’s Philadelphia, The Downs at Mohegan Sun Pocono and Yonkers Raceway. Racing at the Meadowlands for the first time in three years and racing a breakneck schedule across four tracks presented some challenges at first for McNair.

“I’m starting to get used to it,” said McNair regarding the difference in day-to-day life. “At the start for the first couple of weeks was really hectic with getting used to the schedule and logistics with all the tracks. Usually, I have Chester half of the time and then it’s over to Yonkers or the Meadowlands after. It’s just so much of a different schedule, too. Where I live up at home it’s 12 minutes to the track, and all backroads. I make about three turns and there’s no traffic. I come down here and race at Chester to the Meadowlands, Chester to Yonkers and you’re on the road for five hours a day. But it’s all good, it keeps you busy. Right now, all the days run together, and you just keep grinding away.”

When McNair first arrived towards the end of April he was aided by having some drivers for his father, trainer Gregg McNair. He also had some drivers for fellow Ontraio-based trainer Carmen Auciello but has since been able to branch out and find drivers for a healthy sampling of other trainers across different tracks that includes Jeff Cullipher, Tom Shay, Paul Blumenfeld, just to name a few.

“I’ve been fortunate enough that a lot of guys have been using me, and I really appreciate that,” said McNair. “I’ve been lucky enough to get as many drives as I have – I thought there would be some guys that wouldn’t use me because I’m not staying (permanently), but for the most part they’ve been really good in letting me drive. And not even in always putting me down first call, but there’s spare drives out there that the guys are putting me down for. The judges have been great too, getting me a bit of work here and there to help fill in the days.”

Between the perseverance and time it’s taken to figure things out, it’s no coincidence that McNair posted his best night at the Meadowlands yet Friday night (May 21). In five starts, McNair posted a hat-trick with three wins and didn’t miss a fourth by that much. The three wins all came in different ways based on McNair’s familiarity with the horses and how he described the different methods he’s obtained drives. In race 1, McNair was listed as first call for trainer Ashlee Sluggett on a horse named Mister Hat, a 9-year-old gelding racing in $3,000 claiming races at Cal Expo a month ago. With a crafty drive, McNair scored with the 13-1 upset in the opener. His next drive on Friday wasn’t until race 8, but he made the most of that, too, with another double-digit win. This one came on the Jeff Cullipher-trained Skyway Kon Man, a horse that driver Tim Tetrick was listed as first-call on, but McNair picked up the drive when Tetrick opted to odds-on race favorite, Double Account, also trained by Cullipher. McNair teamed up with Cullipher once again in race 11 to win convincingly on the 3-2 public choice Resita.

The Friday night performance can be attributed largely to McNair learning more, the longer he’s been in the U.S.

“The one thing that does really hurt me down here is that it’s kind of driving blind,” said McNair. “I don’t know any of these horses, and the only thing at first I can do is go off the paper. So when I leave the gate with some of these horses I don’t know if they can leave fast or if they can’t. I’m just starting to find that as I go. The horse I won with Thursday at Chester (Spee Club) – I put him on the front-end last week and two of the guys told me after that the horse is no good on the lead, so those are kind of the things you need to figure out as you go. It’s starting to work, but it’s not overnight, it takes more than a couple of weeks. The difference between here and home is that the horses at Mohawk are always the same every week, especially in the wintertime. I’ve driven most of them and I know all of their qualities and I think that’s what helps me out up there a lot. And then down here there’s horses that show Dover lines on them, Harrington lines, then there will be horses that show Vernon lines, horses coming into the Meadowlands to Chester, Yonkers to Chester, Pocono to Chester, Chester to the Meadowlands and there’s just so many horses to keep an eye on and get used to, especially without having driven any of them yet. These other guys know all the horses. They all know the horses in and out but Tetrick for example, he’s one of the main guys and he’ll tell me once in a while what some of the horse’s qualities are things to look for, he knows them all in and out. And so do the rest of the guys. Dave Miller, Dexter Dunn, they all know them. And they’re all very helpful; they’ll tell you about the horses and that makes my job easier.”

That the regular drivers are highly competitive, but also forthright and willing to help McNair and others with some tips and tricks speaks to the camaraderie amongst drivers.

“Professional is the best word that describes it,” said McNair. “And it doesn’t get any higher of a level of professionalism than those guys.”

For McNair, the move to the U.S. east coast was never intended to be permanent and it appears his stay here will come to an end within a week or so as Woodbine Mohawk readies to re-open.

“There will be a bunch of good stakes starts and horses to drive back home and that’s the main thing that I won’t get down here, especially if I’m not staying,” said McNair. “But at least now I know what it’s like here if I ever did want to come back.”