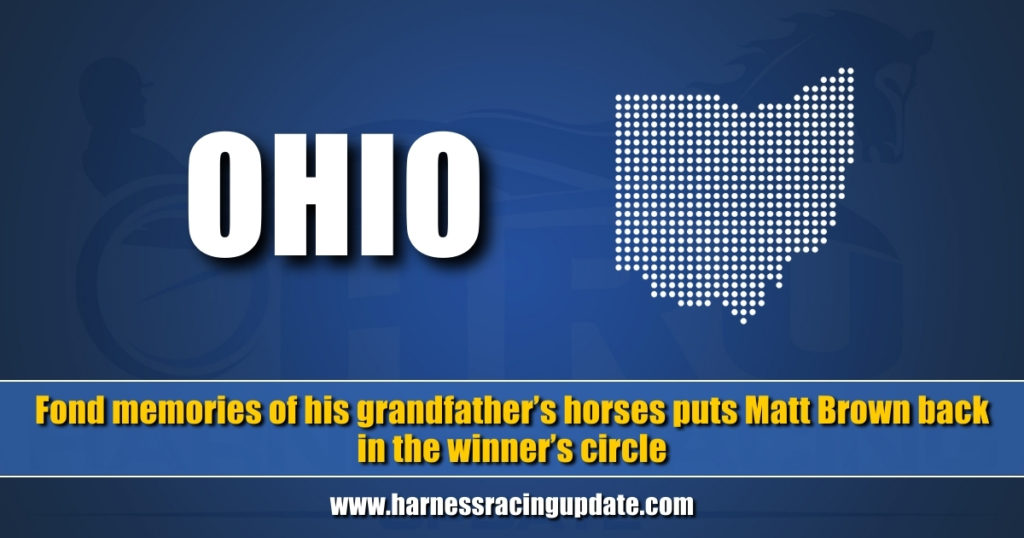 As a middle school and high school student, Matt Brown experienced the thrill of reaching the winner’s circle. It was during that time working for his grandfather, Marvin Brown, that his interest in harness racing was first sparked. Now, Brown is carrying on the tradition, and sophomore trotter Winning Misty is delivering the thrills with her recent exploits at Eldorado Scioto Downs.

“I grew up in the business with my grandpa. He had a couple of trotters here and there back when I was in middle school and high school. Back in the ‘70s it was more full-time with him. When I was working for him it was just a hobby at that point,” Brown said. “I was working for him and we raced at Northfield Park, Scioto Downs, and did some fairs here and there. I fell in love with it.”

Brown, 28, works as a court bailiff, but his pursuit of harness racing began a few years ago after college, marriage and settling down to start a family. In 2017, he recorded his first starts as a trainer/driver with the Cayenne Turbo gelding The Disciple. In eight fair starts, the trotter never missed a check and registered a pair of third-place finishes. That experience led Brown to purchase Winning Misty at the Blooded Horse sale in August 2019. The Winning Fireworks-Caviar Dunn filly brought $6,200.

Brad Conrad | Matt Brown holds Winning Misty with his wife and son next to him in the Scioto Downs winner’s circle, along with lots of family.

Brad Conrad | Winning Misty (Trevor Smith) winning in the Konesky Series on Thursday (May 20) at Eldorado Scioto Downs in 1:56.2.

“I liked her breeding and how she looked, so I bought her, and I’ve been going forward with it,” he said.

Brown trained Winning Misty down as a freshman and made one qualifying start at Northfield Park, where she raced fourth, timed in 2:03.1. He turned her out with sights set on 2021 and made her eligible to the Buckeye Stallion Series and some select fair events. Brown usually arrives at the barn each afternoon around three o’clock. He said there are others on similar schedules, so Winning Misty has company on the track each evening.

“She’s easy to work around. She’s always done anything I’ve ever asked her to do. I’ve never, ever had to force her to do something different,” the owner and trainer said. “If I need to take her up and sit her behind another horse while we’re training a mile, she’ll do that. If I need her to leave out of the gate, she’ll do that. If I’ve ever wanted to experiment with new pieces of equipment, I can put it on her and she’s just taken to it.”

While her demeanor in the barn and during training is low key, Brown said that Winning Misty puts on her game face when lining up behind the starting gate.

With four starts under her belt this season, Winning Misty has quickly shown her competitive nature. Beginning the campaign at Miami Valley, Tyler Smith guided the green sophomore to a runner-up performance in a non-winners of one event, trotting in 1:59.1. Racing a second time at Miami Valley, this time in the opening round of the Buckeye Stallion Series, the filly finished third with Trevor Smith at the lines. This time, Winning Misty circled the oval in a time of 1:58.2.

Once racing moved from Miami Valley to Scioto Downs, the trotter delivered her first victory. Competing in the John Konesky III Trot on May 13, Winning Misty was sent off as the favorite. Trevor Smith again guided the 3-yaer-old, taking command from post six early and setting all the fractions before reaching the wire first in 1:57.2. The win marked the first for Brown as owner and trainer. His charge followed that win with another Thursday, May 20 in the Konesky series. This time, she grabbed the lead after the quarter and won by more than two lengths, stopping the clock in 1:56.2.

“It’s thrilling. I love it. My grandpa had a couple of horses that we won a few races with and I always loved that feeling,” said the Newark, OH resident. “I’ve put a lot of work into her. I didn’t race her as a 2-year-old last year. So the fact that the hard work finally paid off, it’s very exciting.”

Brown was joined in the winner’s circle by his wife, Michelle, young son, Myles, and a host of family that have closely followed Winning Misty’s progress.

“She’s really improved herself each time out,” Brown said. “I really have never seen the filly quit at all, so there’s really no telling how fast she can go. She just keeps making more improvements and winning. I’ve never seen myself, personally, a horse with the attitude that she has.”

The owner purchased another Winning Fireworks filly, this time a freshman named Winning Amber. Brown’s affinity for racing is contagious. His grandfather — the man that served as the catalyst — is also back in the business with a yearling that could end up in Brown’s barn this winter.