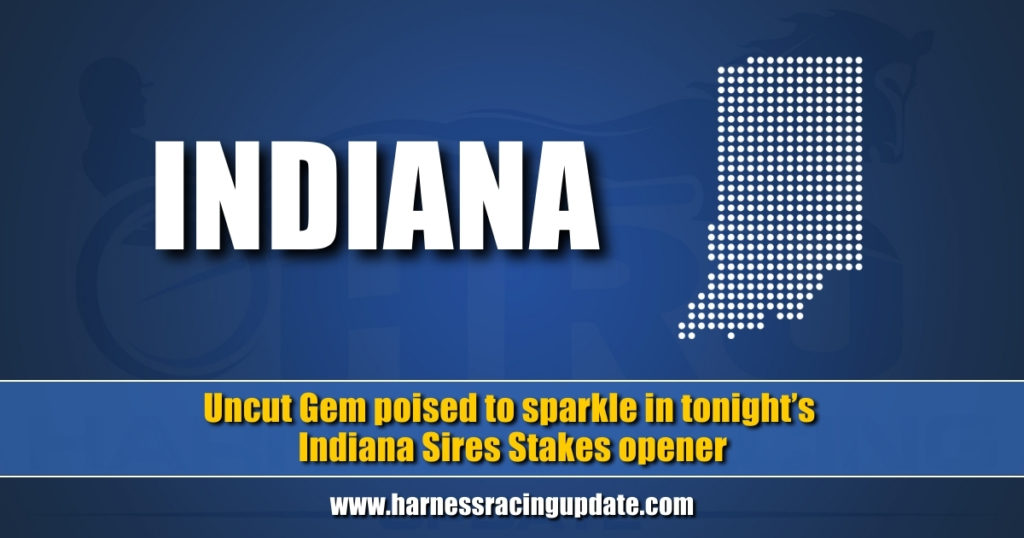 Tonight (May 21), the opening round of Indiana Sires Stakes kicks off at Harrah’s Hoosier Park, and if the series action leading up to this weekend is any indication, the competition will be stout. Jon Taylor, Steve Amspaugh and Eric Demalon will be trackside to cheer on their racing interest Uncut Gem. Together, they have partnered on a filly that last week captured the $22,000 Go On BB final with a 1:51.1 performance. Tonight, the Wilbur Eash trainee looks to sparkle in the evening’s second race, a $49,000 division.

“She’s pretty much right on her schedule,” said Eash. “I kind of wanted her to shine a little bit heading into the sires stakes. I think we’re right at that point. I’m happy with where she is at right at the moment.”

Eash has his charge ready for action, and the owners behind the JK Endofanera—Straight Fuel lass couldn’t be more excited. Taylor, who is Eash’s step-son, has grown up around the business and knows the ups and downs associated with racing. His partners, however, are relatively new to the game, but have strong connections to the 45 year old. Amspaugh is the uncle of Taylor’s wife, and harness racing is part of his lineage.

“We used to race horses back in the 50s and 60s. We used to have a stud horse that had a record of 2:01 and we used him for breeding,” Amspaugh said.

Taylor said that during family get-togethers in Ohio, Amspaugh would inquire about racing, and kept up to date on the horses in Eash’s stable. In late 2017, the two partnered on No Chaser, a mare purchased out of the Harrisburg sale. They raced her for one season before she began broodmare duties.

Demalon, on the other hand, had no connection to racing prior to November 2019. He and Taylor both worked at Charles Schwab for more than 20 years and developed a friendship during that time. Demalon had casually attended races at Hoosier Park, but had never felt the urge to take the plunge into racing. All that changed with a filly cataloged as Maddie K in the Hoosier Classic sale.

“She was supposed to go through the Hoosier sale but she got sick. Dad and I both had her circled to look at. We didn’t get to see her at that time,” Taylor said. “It worked out we didn’t get one bought that year at the sale. Later she came up on ongait.”

The filly turned out to be the fifth foal from a Third Straight mare that had just under $20,000 on her card. However, Straight Fuel came from a strong family. Her dam, the No Nukes mare Armbro Kerosene, produced 11 winners from 13 foals with five six-figure earners led by Indiana Sires Stakes champion and 40-time winner Rocket Fuel p,3, 1:50.1m; 7, 1:50m ($784,006).

“I like to go back and make sure there is some production in the family. Conformation is usually where I start. If I don’t like that, I don’t care how well a horse is bred, I move on,” Eash said of the characteristics he looks for in a horse. “Her appearance is really a standout. She looks good body-wise. It’s a good family. I just liked the way she stood.”

Taylor approached his soon-to-be partners on the filly. After turning away requests in the past, Demalon finally said yes. Amspaugh also joined in on his second racehorse. Taylor and Demalon and some friends came up with a list of 25 potential names for Maddie K. They settled on a name taken from the title of an Adam Sandler movie.

“We had anything and everything under the sun,” explained Taylor. “Separately, Eric ranked his in order from his favorite to least favorite and I did the same, and we took the best average from both of our lists. That’s what we went with, and fortunately it was available. At the time we did this Uncut Gems had just been released.”

As a freshman, Uncut Gem made 11 starts for Eash and the partnership. She managed one win and finished second three times, twice in Indiana Sires Stakes action. She took a mark of 1:53.4 with Joey Putnam as her driver, and earned $36,475. The filly was high strung, and Eash was more concerned about developing a good three year old than putting her on the front end each time out.

“I told them, ‘I won’t let her go too far. If we send this filly one time, I’ll have my hands full. She’s very sensitive,’” Eash said of the 2020 campaign. “We just took her back most of the time. We raced her, but just kept it conservative.”

Taylor had watched this play out before with a young Beckhams Z Tam. Eash raced the colt six times at two and shut him down in late August with his sights set on the 2017 season. That year, the son of Always A Virgin went on to win 11 times, including a triumph in the $527,500 Breeders Crown for three-year-old pacing colts.

“Dad’s a pretty straight shooter when it comes to providing information. He said she had speed, she showed speed. We didn’t have to do any vet work on her and she stayed sound,” noted Taylor. “We came up with a plan to get her qualified and get a couple of races under her belt to see if she was sires stakes worthy. We didn’t want to over-race her. That’s one thing that dad’s really good at, taking care of his horses.”

In five attempts this season, Uncut Gem has registered two wins and a pair of runner-up finishes. Sent off at odds of 20-1 in the opening leg of the Go On BB, Putnam steered the filly to a second-place finish, sprinting home with a :26 last quarter. Favored the next week, she scored a 1:54.3 triumph in the second leg. In the May 13 final, Putnam placed her on the front after the quarter and the duo never looked back, winning by two lengths in her fastest mile to date. Eash attended a wedding that night and was not on hand for the victory, but the partnership was there in full force.

“This doesn’t happen to everybody. You could probably buy 10 horses to get one like Uncut Gem,” said Amspaugh. “She’s only my second horse. It’s been a very big surprise, especially with how fast they go now.”

Taylor has worked hard to manage expectations, first with an inexperienced freshman and now with a sophomore that has provided flashes of ability. This summer Uncut Gem will have to face the likes of Somethingbeautiful, last year’s Pacer of the Year in Indiana, and Hot Mess Express, a 1:50 winner last week at the Meadowlands, as well as several other fast fillies. Tonight, those pacers battle in the second division, slated as Race 9 on the program.

“Jon has asked me for several years off and on, and I kind of took the plunge not knowing what to expect, but it’s beyond my wildest dreams. Going up there and realizing you have a horse in the race, it’s very exciting. Myself, my wife and my son, we’re all in. We love it,” added Demalon, who is already planning to reinvest at the yearlings sale this fall.

The contenders will separate themselves from the pretenders over the next few rounds of Indiana Sires Stakes competition. Will Uncut Gem dazzle when tested? For now, her connections are thrilled with the experience and the prospects of more excitement to come.

“They’re on cloud nine. I am too. I am for them,” Taylor said. “She’s started out this season well. We’re just now getting into the competitive part of it, the hard racing is just getting started.”