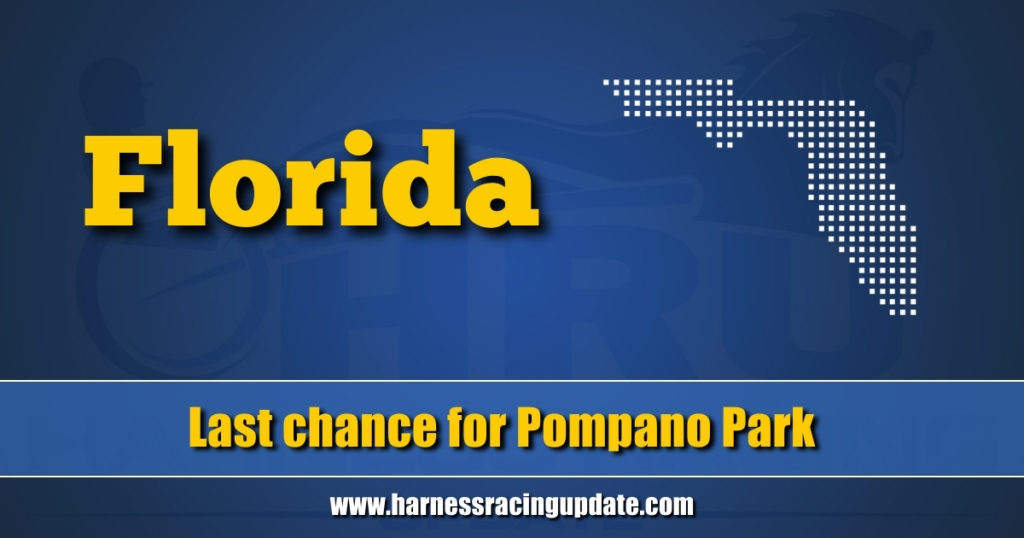 It is looking increasingly likely that Florida casino interests will get their wish and be allowed to decouple from standardbred racing, putting the future of the state’s lone harness track in jeopardy of closing after next year.

Why is consistently generating record handle not enough to keep a harness racetrack in business? Because the Florida casino gaming business urgently wants to be decoupled from harness racing. It may soon get its wish.

Dan Daley is the representative for Florida House District #97. If his name sounds familiar in a harness racing article, it should: “My dad — actually, we have the same name — races in the Northeast. He’s stabled at Vernon; races in Canada, Ohio, Pennsylvania; and they also stable in Florida for six months of the year. So I grew up in Florida, in the industry. I actually grew up at what was Pompano Park, now known as The Isle. That’s in my life. I know the industry better than probably anybody in this building.”

The “building” Daley mentioned is the Florida State Capitol in Tallahassee. On Wednesday (May 19), he took a few minutes to explain what was currently at stake inside its doors.

“We are in a gaming special session, which means that we’re meeting specifically on the issue of gaming, namely on a new Seminole compact with the Seminole Tribe in Florida.”
Daley said pari-mutuel standardbred racing was explicitly threatened by Senate Bill 8-A put forward by Republican Senator Travis Hutson.

“One of the bills that was filed in addition to the compact is a bill that would essentially decouple standardbreds, quarter horses, and jai alai, but keep thoroughbreds protected.”

The bill was to be voted on Wednesday afternoon. It revises “application requirements for an operating license to conduct pari-mutuel wagering for a pari-mutuel facility.” Included in its wording are prohibitions on greyhound racing; authorization of jai alai, quarter horse racing and harness racing permit-holders “to elect not to conduct live racing or games,” and a requirement that thoroughbred permit-holders conduct live racing.

Adding insult to injury, SB-8A allows permit-holders “that do not conduct live racing or games [to] retain their permit” to keep their slot machines. In the case of the state’s only harness track, which is unnamed, “the harness horse racing permit holder, is eligible to be a host track for intertrack wagering and simulcasting and remains eligible for a cardroom license.”

Isle Casino Pompano Park is conveniently grandfathered in by an amendment that restricts slots, table games, and simulcast wagering to venues which were licensed for pari-mutuel wagering in 2021/22. Barring a miracle, 2021/22 will be the last-ever season for live standardbred racing at Pompano, a fact recently mentioned in HRU by Caesars Entertainment senior vice president of racing Joe Morris.

Daley said he “took issue” with Senator Hutson’s view that the Florida harness racing industry was “kind of 50/50 on whether they wanted to be decoupled,” a quote that appeared in Tampa Bay Times coverage of Florida Senate Bill 7080 in April. Although that bill died April 30 because the calendar ran out, the same debate was revived in the special gaming session which began May 17. Daley said it was unimaginable that any harness racing participants were eager to end pari-mutuel racing, and “ironic” that Hutson would advocate for what could kill the state’s standardbred industry “given that he’s got the largest standardbred training centre in the country [Spring Garden Ranch] in his district, as well as seven or eight other standardbred farms.”

Earlier this week, Daley’s efforts caused short-lived optimism that live harness racing would remain an essential requirement for Isle Casino Pompano Park’s other gaming permits. The House Select Subcommittee on Authorized Gaming Activity approved HB-7A. On Monday, Republican House Representative Chris Latvala was quoted in Florida Politics as saying, “We are looking into the standardbred’s issue and putting that back together” in the Senate bill.

By Wednesday morning, the situation was clearer, and sobering: “Senate has declined our amendment,” Daley told HRU. “So I was able to get the House to agree to it; the House was going to protect standardbreds. The Senate would not take that amendment. And I had the votes in the Senate. They would not bring up my amendment to protect harness racing for consideration.”

“So as it stands today [May 19], we are not in a good position, and barring something happening in the next couple of hours [Wednesday afternoon] that blows this whole thing up, which I don’t foresee, or Governor DeSantis vetoing this bill, harness horses will be decoupled and it will essentially lead to the elimination of the industry in Florida.”

Daley spoke with HRU before the vote on Senate Bill 8-A took place. “Later this afternoon [May 19], we’re going to take up the Senate bill and we will vote on the Senate bill. The House is not letting me put the amendment on this bill, because the Senate is opposed to it.” Why the opposition? “I couldn’t tell you.”

The Broward District representative noted that long-standing plans to redevelop Isle Casino Pompano Park into a multi-use property without racing were independent of the Senate vote. “That’s the subject of an ongoing lawsuit,” he added, “and I’m not so sure that they’ll win that lawsuit. Regardless of the outcome of the lawsuit, for the most part, once decoupling goes through, they’ll have no requirement to keep racing at the track.

“Now [Caesars] say, ‘Oh well, don’t worry, we’re not going to get rid of it. We just don’t want to be coupled.’ If that was the case, why has The Isle filed a rezoning application to redevelop the property without a racetrack?

“It’s been a fight that the casino operator has been bringing for years. Not Caesars specifically, but if you look back, ever since slots were approved at that property, they’ve been trying to starve off standardbred racing.”

Pompano isn’t in Daley’s district, but it’s in his blood.

“For years up here in Tallahassee, they’ve been pushing the decoupling idea, saying, ‘Oh, harness racing is a dying industry. It’s not as big and powerful and active as the thoroughbreds, so we can basically get rid of them.’ That’s essentially what’s kind of been driving the boat, and I’ve been making the argument that it’s not a dying industry: As a matter of fact, The Isle just hit a 57-year record in the history of harness racing in Florida, two weeks ago. In a 108-day season, they managed to move $81 million in the handle.”

How did Pompano still find itself in the line of fire, even after a record-breaking season of horseplayers answering announcer/director of racing Gabe Prewitt’s call to #SendItIn?

“It comes down to money and influence, and standardbred horsemen and horsewomen are generally apolitical,” said Daley. “They don’t have a campaign war chest; they’re not terribly politically active. Look at my father as an example: Look, he wants to race his horses, care for his horses—that’s his life. He doesn’t care about Tallahassee. He doesn’t care about Washington D.C. He doesn’t care about anything except his horses. And while that’s admirable and amazing, it leads to situations like this, where somebody’s coming for your livelihood and you’re not as juiced as the next guy, and in this case, that next guy is the thoroughbreds.

“The thoroughbred breeders and all the ancillary groups that are connected to them have some significant juice in this state.”

Although Ocala thoroughbred breeders have ensured that their sport is spared decoupling, Florida Politics reported this week that a representative for Gulfstream Park had (unsuccessfully) argued that if Pompano can decouple, it should be allowed to follow suit. Daley said that Florida thoroughbred horsepeople were not against standardbred peers sharing their protection under the Senate bill. “I’ve had conversations with them. They’re not opposed to having us join them as coupled. They’ve not been pushing. It’s not like they’re throwing us under the bus.”

Late Wednesday, Daley confirmed that events had played out as he expected.

He confirmed that there will be no additional sessions about the gambling bills, and no public referendum on decoupling.

“I think we shift our focus to the Governor,” said Daley. “Direct people to write to say, ‘Mr. Governor, you are literally ending my business in Florida. Please veto this bill,’ because that is the only way, after today.” Time to #SendItIn, literally, to accomplish what millions of dollars wagered could not. Zero minutes to post is an understatement.
Dan Daley’s suggested template for people who want to support FL harness racing:

“Please copy, post, and SHARE the post below! We need this to reach as many people as possible,” Daley said. “We need everyone to call and email (both) Governor Ron DeSantis’ office as soon as possible. If you in any way, shape, or form rely on harness racing (or you’re just an avid fan/supporter), it is now or never. You, your spouse (send separate emails and make separate calls), grooms, blacksmiths, tack shop owners, vets, everyone follow the direction below. Please do this ASAP!

“You can create your own email and explain why this is important to you and your family, or use the draft below. Be sure to mention that we want him to VETO SB-8A.”

The Florida standardbred industry has an estimated $750 million dollar impact in this state and employs thousands in, and indirectly connected to, the industry. While there is only one active racetrack, there are 62 farms and 7 training facilities scattered across our state.

Standardbred racing has a rich history in Florida and contrary to what some say, is not a dying sport. As a matter of fact, this past racing season, the Isle Casino and Racing Pompano Park did a record-breaking $81 million dollars in just 108 days—the largest handle in the Isle’s 57-year history.

Please don’t allow the Florida Legislature to pick winners (the thoroughbreds) and losers (the standardbreds) at the expense of Floridian livelihoods.