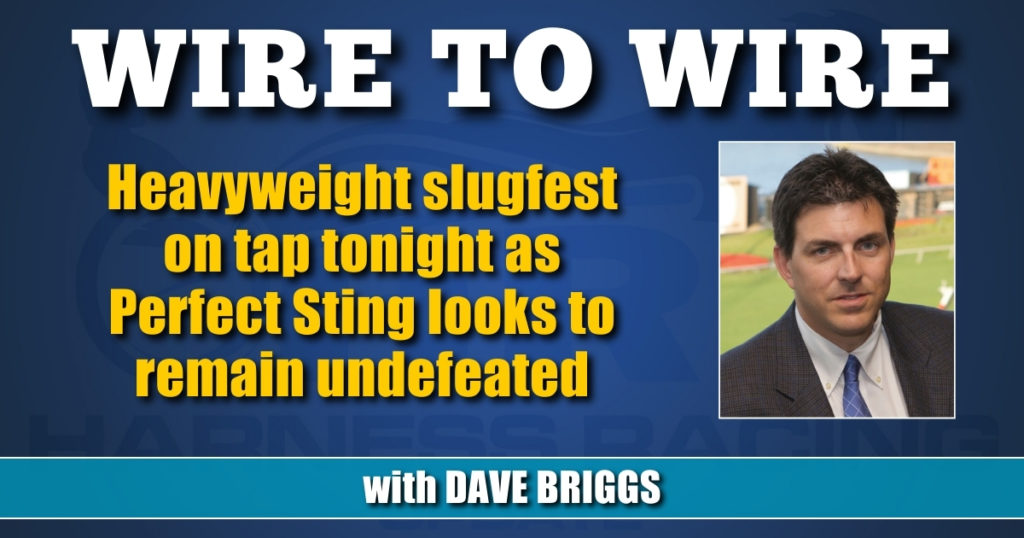 Tonight (May 16) marks the first huge slugfest of the year in the heavyweight division and undefeated superstar Perfect Sting has, arguably, the most to lose as he takes on three chief rivals in a $51,045 Pennsylvania Sires Stakes (PASS) division at The Downs at Mohegan Sun Pocono.

While the Hall of Fame trainer said he is pumped to see how his top pupil fares against such tough foes, Holloway had hoped for an easier assignment to kick off Perfect Sting’s 2021 campaign. The fact the colt has yet to be beaten and was crowned the 2020 winner of the Dan Patch Award as the top male freshman pacer in the nation makes him a huge target.

“Everybody is going to be gunning for you,” he said of tonight’s start. “I didn’t expect to be drawing in easy, but… it would’ve been nice if (his debut) was at The Meadowlands or a nice, big racetrack where he would’ve had more opportunity. It’s kind of cut and dry the way the race is going to go on the five-eighths. You’re not going to let Lou’s Pearlman or Summa Cum Laude or Abuckabett (get away from you) and they aren’t going to let us get away easy, but we’re not looking to be third-over coming for home. You can do that if you’re at The Meadowlands and that’s how the race unfolds itself.”

Holloway, 64, has conditioned such stars as Jenna’s Beach Boy, Always A Virgin, She’s A Great Lady and both of Perfect Sting’s blazingly-fast parents, Always B Miki and Shebestingin, but he said Perfect Sting isthe best horse he’s ever trained.

“He’s tougher than his mother, but he’s as fast as his mother. And he could live as long as his father,” Holloway said. “Miki had a big set of lungs. (Perfect Sting is a) pretty good combination of both of them.”

As for managing the all-important sophomore campaign, Holloway said some of his previous stars were fortunate to be able to ease into their 3-year-old seasons before hitting the major stakes races.

“(Always A) Virgin, (Always B) Miki and other horses weren’t expected to be the best when they first started (their 3-year-old seasons). They kind of grew as they started racing, but Jenna (‘s Beach Boy), he’d been 2-year-old of the year and was forced to race in the 3-year-old open his first start and then the second week, the owner had him in the regular open and he raced older horses.”

WAIT, HE WAS PASSED?

Perfect Sting comes into tonight’s race off two strong qualifiers at The Meadowlands on April 23 (1:52.2) and April 30 (1:52.3), respectively. In the latter, driver David Miller even allowed the homebred colt to be passed before retaking the lead and cruising to victory much to the consternation of part-owner and breeder Marty Granoff of Val D’Or Farms, who shares Perfect Sting’s ownership papers and breeding credits with Brittany Farms of Kentucky.

“Marty Granoff didn’t like him getting passed,” Holloway said, laughing. “Dave will say he’d like to sit behind someone for a change. I’ll just have to keep Marty happy, that’s all… He said, ‘Look, look, that horse went on by him!’ That’s Marty, he wants to win every race by five or six. He does like the pressure of it, though, so it’s funny.

Holloway said remaining perfect, “would be nice” but the important part is winning the right races.

“Horses like that, there’s times when they get beat. Actually, Jenna, he lost twice, but he was still the best horse out there. Somebeachsomewhere lost in the (Meadowlands) Pace… They don’t lose often, but they can get beat. It happens.

“Would I like to be undefeated? Oh, I think that would be the thrill of a lifetime and coming at the end of my career, that would be pretty cool, but meanwhile I’m pretty realistic and I doubt it’s going to happen and not because the horse isn’t good, it’s just that anything can happen.”

As for managing Perfect Sting’s schedule to try to win the biggest stakes, Holloway said the fact the Pepsi North America Cup at Woodbine Mohawk Park has been moved from June to Sept. 4 due to a lockdown of racing in Ontario opens up the possibility Perfect Sting will race in the Little Brown Jug on Sept. 23.

“I’m disappointed, like everyone else, with the Cup being moved. His schedule was set up the way it was – June for the Cup, July for the (Meadowlands) Pace, August for the Hempt and then on down to Kentucky… It probably brings the Little Brown Jug into play now, whereas before I would have definitely done the Tall Dark Stranger route (and skipped the Jug)… I’m not a fan of the heats anymore.”

As for how his champion has changed from a freshman to a sophomore, Holloway said the pacer is, “more mature mentally. He’s been training extremely well, which you could never say that about him before… you always had to make him do his work, but right now he’s much more up for it.

“He’s all play. In the morning, he’s tough to handle because all he wants to do is play and he doesn’t get tired. He’s light on his feet. He’s got it all… He’s good-looking, he’s good-gaited, he’s sound and he’s fast and he’s tough.”

Holloway injured his shoulder in a training accident in early April and said the toughest part has been not being able to sit behind Perfect Sting since April 10.

“I’m handling (the pressure) part fine, but I’m not real thrilled about sitting on the sidelines right now, but I think that’ll only be another couple of weeks. There’s all kind of ways to skin a cat and the horse hasn’t missed a beat without me being the one sitting behind him. It’s just the way you’re used to doing things, you know? I like to sit behind them, I like to see everything. Other people think they can see just as much or more from the sidelines, so that’s neither here nor there, just what I would like.”

In the interim, Miller has been handling Perfect Sting’s training trips.

“He knows the horse and he believes in the horse. So, that’s been good that he’s done that. They are overpaid anyway, catch drivers, he needs to do some work,” Holloway said, laughing.

Tonight we’ll find out if Miller can help Perfect Sting extend his undefeated streak to 11 career races and push the pacer’s career earnings over $550,000 as the quest to win the biggest sophomore races on the continent begins in earnest.