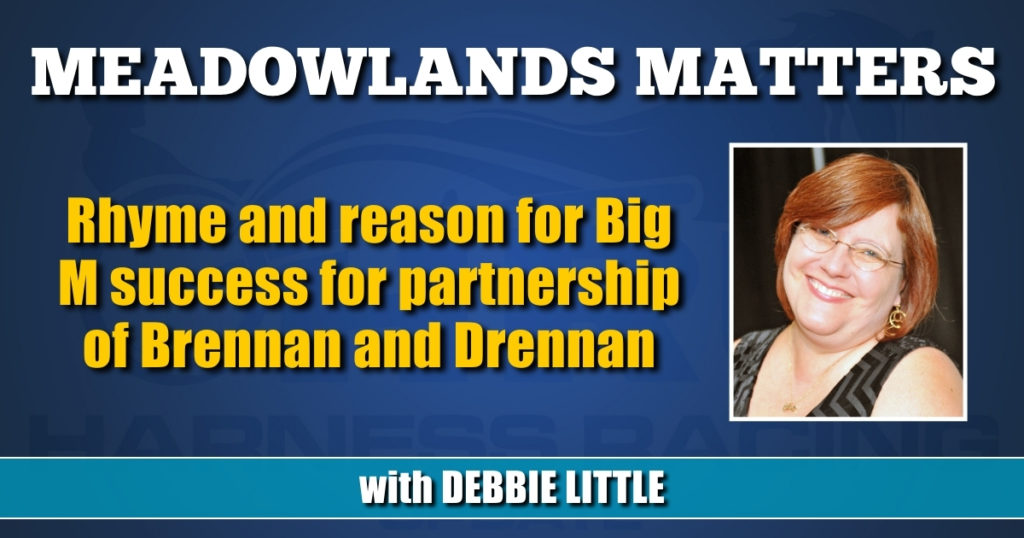 What sound do you hear when George Brennan drives for Nik Drennan? Cha-ching!

The combo of Brennan and trainer Drennan has been highly successful at The Meadowlands in 2021, due in part due to Yonkers Raceway being closed on Saturdays.

“[Drennan] had Environs Hanover and he was in on Saturday [Feb. 20] in his first race [of the season] and he said, ‘Do you want to come over?’” said Brennan. “And we won that first start.”

Brennan told HRU in December 2020 that there was a short list of trainers he’d motor up the New Jersey Turnpike for on a Saturday night and Drennan was definitely one of them.

That decision has certainly paid off for the fans since the pair continued to win and amassed a total of five victories from only six starts over the next month.

One of those wins was with Sundown Kid, who had previously been driven by Mark MacDonald.

“The first start we raced [Sundown Kid], Mark MacDonald drove him and me and George were standing there watching the race, and he said, ‘That horse should have a gaiting pole on the inside,’” said Drennan. “The next start we put it on and we also added Lasix and tinkered with some equipment and he did win and paid [almost] $50 with George driving. If he suggests the horse needs a snakecord on or a bigger headpole, absolutely [I’m listening].”

It’s important to note that Drennan did not just give the drive on Sundown Kid to Brennan, it was MacDonald who chose to give it up.

“Mark booked off him and that’s why George was driving him,” said Drennan. “So, it wasn’t like I took Mark off. Mark took another horse and George ended up on him and we kept tinkering and it worked out.”

Part of what makes Brennan, 54, and Drennan, 38, click on the track, is their long friendship.

“It goes way back to when he was a kid working for Tony Montini and I was driving for him then and then he went on his own and I continued driving for him and did well,” said Brennan.

In 2007, Drennan moved to the States from Canada to work for Montini and run his New Jersey operation. A few years later, when Drennan went on his own, Brennan was one of the many drivers he used at The Big M.

Brennan made his Meadowlands debut on the day after Christmas in 1994, and by 1997, he was already a top-five driver at the track and had great success there over the years, including a driving title in 2010 and winning the Hambletonian and Hambletonian Oaks on the same day in 2011.

“[Alexie Mattosie] won the [2011] William Haughton Memorial for me 10 years ago, and [Brennan] drove him for me,” said Drennan. “We weren’t really close friends back then, but over the years, we’ve become pretty good friends.

“It’s just kind of worked out [this year] that he was available and I had a bunch of horses to race. And he’s just as good as he’s ever been, in my opinion, so why not?”

Brennan has nothing but good things to say about Drennan and how he operates his stable.

“He reminds me of Nifty Norman on a much smaller scale,” said Brennan. “He works just like Nifty does. Same work ethic. He’s at the barn at 4:30 in the morning. He’s feeding, he’s turning horses out. He’s hands on and that’s how Nifty is, who I have the utmost respect for.

Drennan and Brennan agree that being like-minded and candid contributes to their success.

“He’s honest after the race,” said Drennan. “He doesn’t try to sugarcoat anything. I’m the same way. If a horse is no good, just tell me he’s no good. If he’s no good, he’s no good, and we’ve got to work on something. That’s why me and him get along so well. We’re on the same page and I don’t have to tell him anything, anytime about how to drive a horse. Maybe the first time he drives one I tell him a little bit about the horse, but that’s it. And he’s good with a hot horse and he’s good with a lazy horse.”

In 32 Big M starts in 2021, Brennan and Drennan have earned a check 69 per cent of the time. They are hitting the board at a 47 per cent clip with 25 per cent of those being wins.

“It’s always great to win at The Meadowlands, regardless of whether it’s for Nik or somebody else I’m driving for. But winning for Nik makes it extra special because we’re such close friends,” said Brennan. “The Meadowlands is just in a league of its own. It’s just a great place.”

In December of 2020, Brennan joked with HRU about the thought of driving regularly at The Meadowlands again.

If the stats are any indication, Brennan’s always alive at The Meadowlands.

GET YOUR PREAK ON

With ongoing restrictions due to COVID-19, please check playmeadowlands.com for dining information.