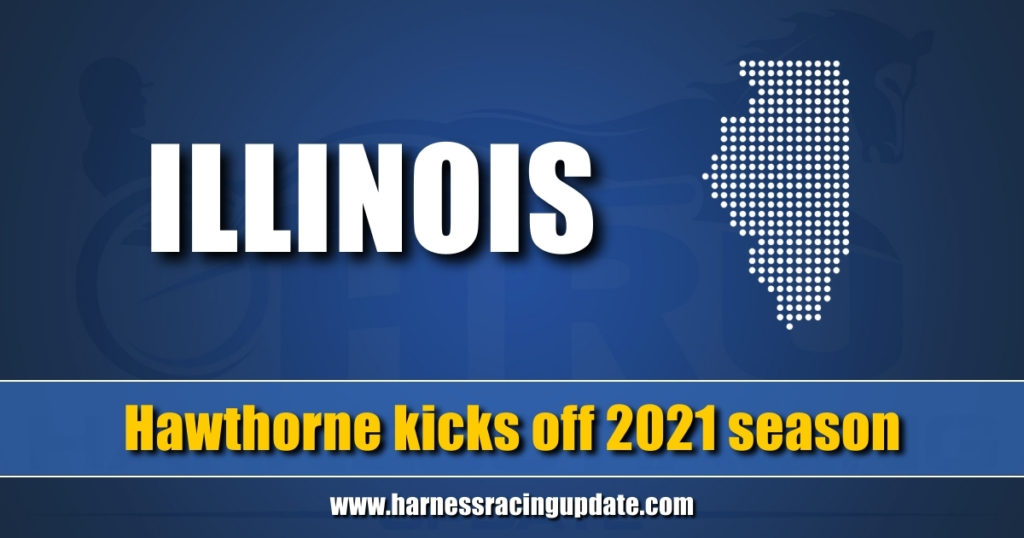 These are by no means the best of times in Illinois racing, but like hard-core horseplayers the hierarchy at Hawthorne Race Course and the people who race there are going into the 63-night harness meeting that will begin tonight (May 7) with an upbeat attitude.

Despite having last year’s scheduled 92-night meeting interrupted for 2 ½ months and shrunken to 59 nights because of the COVID-19 pandemic and even though there were virtually no spectators from the resumption of racing June 10 until the meeting ended on Sept. 20 there was a 34 per cent increase in all sources handle versus the 70-night 2019 total.

“People were seeing racing on TV and betting before the other sports got going last summer and it seems like some of the people doing the betting on horses have stuck around and continue to wager on them.”

After last year’s reopening, Hawthorne had no spectators until licensed owners were allowed in for the meeting’s premier event, the Night of Champions, on Sept. 19. There also was limited attendance when the meeting concluded the following night.

At the start of the current harness meeting that will continue through Sept. 26 attendance will be confined to 50 per cent of capacity but hopes are high that restrictions in Illinois will be lifted sometime during the summer.

All of the programs will be held on Friday, Saturday and Sunday.

In contrast, at Indiana neighbor Hoosier Park’s meeting that began March 26 and continues through Dec. 4 there will be racing five nights a week from May 23-Sept. 26.

The addition of Sunday racing during the five-night time frame concerns Miller.

“In the past they did not race on Sunday so we’re anxious to see what impact the change will have on us,” he said. “On Sunday we would get drivers from there for our races—we would get Mike Osteen and Brandon Bates and every once in a while Sam Widger. Now, we’re not going to see those guys because of the schedule.

“I think the change will hurt both racetracks. Trainers used to have an option. If you couldn’t get in a Sunday race at Hawthorne there might be a race at Hoosier (later in the week with the same conditions) and vice-versa.”

Bolstering the Hawthorne trainer ranks will be the return of Bob Phillips, an absentee for a few years, and the migration of Roman Lopez, Jesse Pacheco and Nathalie Tremblay from California.

Defending trainer titlist Mike Brink will be trying to repeat and will be challenged by Steve Searle, who trailed by a single winner, and Terry Leonard, who was three back after reigning as champion in 2018 and 2019.

Terry’s son, Casey Leonard, will be in quest of his six consecutive driver title.

Also on Hawthorne’s VIP list are Kyle Wilfong, the runner-up in the driver standings who also will be overseeing the string his father, prominent trainer Brett Wilfong, is sending from the family’s farm in Indiana.

“We’re going to have a good summer,” predicted race secretary Robin Schadt, who also is director of racing at Cal Expo. “We’ve had a good response to the summer series nominations, and that begins on opening weekend. Our 2-year-old crop is nominated for the Night of Champions series, and that’s exciting because we have many more than last year.

“It sounds like all the county fairs are going to happen as scheduled (after being moved to Springfield last year) and the State Fairs (at Springfield and DuQuoin), as well.”

“Those are in mid-and-late August, and it looks like we will be able to have crowds at both,” Miller said. “There’s more time for vaccinations, enabling people to get out there.”

The fairs are very important because since the closing of the sister tracks, Balmoral Park and Maywood Park at the end of their 2015 meetings, Hawthorne is the only track in the state conducting harness racing. While the harness horses and thoroughbreds have a time share arrangement at Hawthorne, the thoroughbreds enjoy exclusivity other Chicago metropolitan area track, Arlington International Racecourse, and at Fairmount Park, in downstate Collinsville across from St. Louis.

Next year, a major scheduling problem figures to confront both breeds because Arlington’s owner, Churchill Downs, Inc. (CDI), plans to discontinue racing there after this summer’s meeting and sell what Architectural Digest has categorized as “the world’s most beautiful racetrack” for redevelopment of the 326-acre property for other purposes.

Bill Carstanjen, the chief executive officer of CDI, said the decision was made “so that we can more effectively deploy this currently locked-up capital into high-growth projects.”

Although the leaders of the Illinois Thoroughbred Horsemen’s Association and the track’s leading trainer for the past eight years, Larry Rivelli, are organizing investors to make an offer to buy Arlington and preserve it for racing the odds are stacked heavily against them.

The reason is because CDI has a 61 per cent interest in the most lucrative of the state’s 10 operating casinos, Rivers Casino, in Des Plaines, which is located only 10 miles from Arlington.

Ironically, the massive Illinois gambling expansion law that was enacted in June, 2019 permits racetracks in the state to add casinos and Hawthorne and Fairmount are in the process of doing so.

When Arlington president Tony Petrillo and CDI attorneys were hauled on the carpet by the Illinois Racing Board (IRB) for an explanation of the track’s refusal to apply for casino license they said the reason was because the horsepeople’s cut of the adjusted gross revenue was too high.

But that was an obvious pretext, given the fact that Arlington had joined forces with the other tracks and the thoroughbred and harness horsemen to lobby legislators for a casino for years before CDI acquired majority ownership of Rivers Casino in March, 2019.

“As has been made perfectly clear…the ‘shareholder value” of CDI holdings trumps all other considerations,” Jim O’Donnell wrote, expressing the consensus, in his Daily Herald column.

Now, more than ever, those who race at Hawthorne consider the $400 million casino that is under construction there to be a godsend.

Last year, the casino was scheduled to open during this fall’s thoroughbred meeting but now Hawthorne president Tim Carey anticipates “probably looking at the third quarter of 2022.”

“It’s going to be a state of the art facility that we’ll be very proud of,” he said.

Regarding the likelihood of Arlington closing, Carey said: “We’ve been handed the mantle for both thoroughbred and harness and we are proudly taking on that challenge.”

Although Carey said a decision hasn’t been made on which breed will be racing the summer dates at Hawthorne after Arlington’s anticipated shutdown, the impact will be detrimental for both thoroughbred and harness racing. If, as expected, the thoroughbreds get the summer dates it will be the first time since pari-mutuel harness racing was introduced in Illinois at Maywood on June 6, 1946 that the standardbreds haven’t had a prime-time spot on the calendar.

The current situation is light years removed from that of 1995 when there were 516 harness racing programs at Hawthorne, Maywood, Balmoral and Sportsman’s Park. Now-defunct Sportsman’s had its last night of harness racing on Oct. 10, 1997, prefacing the ill-fated attempt to remake the track into a combination thoroughbred and auto racing facility, but most years thereafter the sport was on the calendar for 12 months before the demise of Maywood and Balmoral.

To rectify the problem the 2019 gaming expansion legislation called for a new harness track/casino to be constructed in any one of six south suburban townships in the Chicago metropolitan area.

However, a month after the IRB in the fall of 2019 approved Heidner’s request for a Dec. 6-29, 2020 meeting Gov. J.B. Pritzer announced that the state-owned land on which the racino was to be built was no longer for sale and the board revoked the dates. The governor’s decision was prompted by Chicago Tribune disclosures detailing Heidner’s long-standing business relationship with a bank chairman who allegedly had dealings with members of the Mafia.

While Heidner has denied any involvement with these individuals, as a consequence of the bad publicity it appears highly unlikely that the IRB would give its blessing to any further attempts he might make to build and operate a racino.

Nevertheless, Carey remains steadfast in his support for a south suburban racino and calls finding somebody to construct, own and operate it “a work in progress.”

“We’ll get that thing going,” he said. “We have our game plan and Arlington has theirs. We’re going to grow Illinois racing — both thoroughbred and harness. Right now, we’re holding our own. We’re very excited to switch over the racetrack (following the April 25 conclusion of the thoroughbred meeting) and bring on the harness horses.”

Carey also is upbeat about the PointsBet Sportsbooks he has opened this year at the track and at its Club Hawthorne off-track betting locations in south suburban Crestwood and northwest suburban Prospect Heights.

Sportsbooks were part of the 2019 gambling expansion legislation but, unlike casinos at the racetracks, there’s no allocation for purse money.

In the opinion of Hawthorne’s assistant general manager, John Walsh, “there is some crossover” between horseplayers and those who bet on mainstream sports. He is hopeful that “some people will bet on horse racing when they come in for other sports and vice-versa.”

In the meantime, while the long-range forecast for Illinois harness racing appears to be favorable, continued turbulence is in the offing for the next few years.