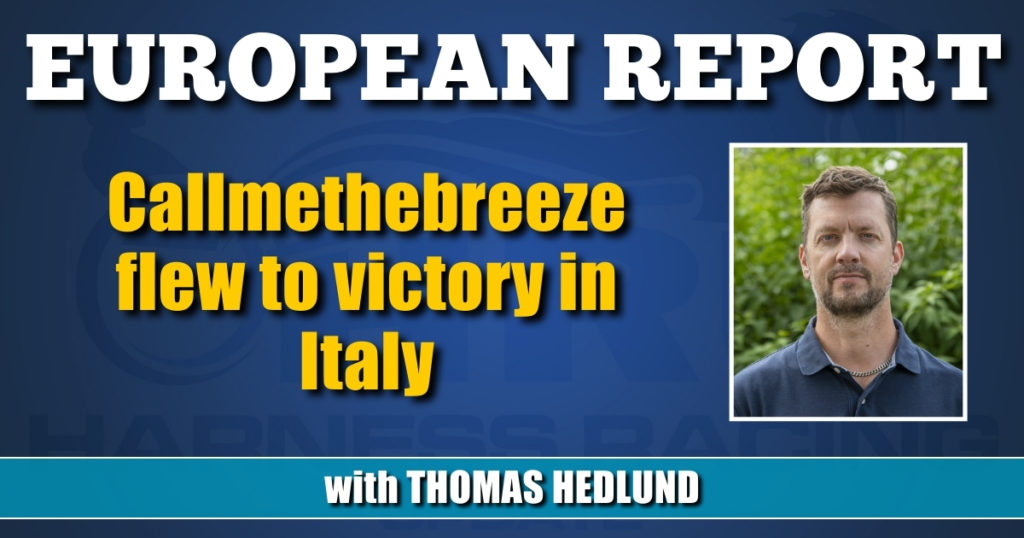 Callmethebreeze flew to victory in Italy

The 3-year-old Trixton son is owned by French trainer Philippe Allaire and Callmethebreeze now belongs in the barn of the owner. Last season, the horse was trained by Alessandro Gocciadoro for whom he won the $265,000 Mipaaf Allevamento Maschi.

Callmethebreeze opened quickly in Modena last Sunday and Guzzinati opted for a pocket trip with Allaire’s trotter. At the home stretch, free space was given to the Trixton son and Callmethebreeze sprinted to a safe win in a mile rate of 1:59.4 over 1.3 miles.

Allaire continued on the winning path when Vincennes offered some nice races for 3-year-olds on Tuesday’s (April 27) race card. Allaire’s Italiano Vero (Ready Cash) was the heavy favorite in $120,000 Prix Paul Karle and driver David Thomain hit the lead at an early stage of the race. Outside trotter Ideal Ligneries challenged seriously over the stretch, but Italiano Vero fought courageously and held on to victory in a mile rate of 1:56.1 over 1.3 miles, a new stakes record.

Three-year-old fillies gathered around Vincennes’ black track when the $120,000 Prix Masina was on the card and Allaire collected another big win in Paris on Tuesday afternoon. Franck Nivard sat behind Allaire’s It’s Now Or Never (Charly du Noyer) and used the filly’s ability to leave behind the gate. Despite a tough post position (8), Nivard hit the lead while first choice Inoubliable got a trip as third on the inside.

When Inoubliable attacked at the top of the stretch, It’s Now Or Never had gained some lengths in advantage and Philippe Allaire’s horse won in a tight finish in mile rate, stakes record, 1:57.2.

Ecurie D. got the first ticket to Elitloppet 2021 and during the past week, four additional names were put on the list of horses that are welcome to Solvalla on May 30.

Jerry Riordan-trained Aetos Kronos (Bold Eagle), who impressed a lot by winning an elimination for the Paralympiatravet last Saturday, received his ticket on Sunday afternoon. Solvalla invited three horses at the same time and the second horse on the list was Vivid Wise As (Yankee Glide), who won Prix de l’Atlantique at Enghien for trainer Alessandro Gocciadoro last weekend. Vivid Wise As entered Elitloppet 2020 as the bettors’ first choice and he has really showed that he belongs in the European top.

Daniel Redén trained Don Fanucci Zet (Hard Livin), winner of the $240,000 Sprintermästaren and runner up in the $860,000 Derby last year, got his invitation for Elitloppet in connection with the latter-named horses. And Solvalla announced on Wednesday night, that French champion trainer Jean-Michel Bazire will enter the Elitloppet with his Dorgos de Guez (Romcok de Guez). French trotters are always interesting at Solvalla and Dorgos de Guez has, among several big wins, won the $133,000 Prix du Luxembourg at Vincennes.

Vermo racetrack in Helsinki, Finland gets ready for $133,000 Finlandia-ajo on May 9 and eight out of 10 horses are ready for the race, where an invitation for the Elitloppet is at stake.