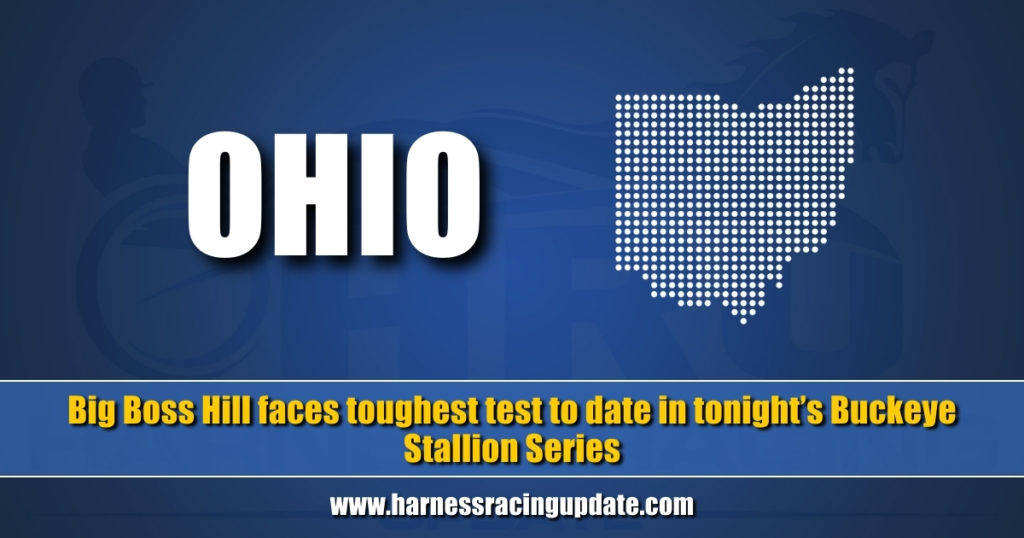 “Jason (Ash) and I bought him as a 2-year-old,” Cox said of the online purchase. “We had a decent 2-year-old last year that made some money in Pennsylvania so we thought we could take a chance. We liked his pedigree. The family shows that with a little age they get better.”

The sixth foal out of the Art Major mare, the dam has yet to produce a foal that hasn’t reached the winner’s circle. Big Boss Hill is a half-brother to 18-time winner Western Hill p,3, 1:50.1 ($355,702) and two other six-figure earners. As a freshman, Virgil Morgan campaigned the pacer, yielding two wins and a trio of third-place performances on the Ohio fair circuit. By late August, Big Boss Hill’s campaign was done, and in early September, Cox had bought the gelding. A few months later, the trainer would get his first look at his acquisition.

“When we bought him we just had him sent to the turnout. I didn’t see him until December,” Cox said.

When he did set eyes on Big Boss Hill for the first time, he noticed the horse had some conformation issues up front. His concerns were eased once he began to work with the pacer.

“The first day I jogged him I thought he had a nice gait,” said Cox, a Streetsboro, OH resident. “He’s trained down well, and he’s nice to be around.”

After a pair of qualifiers at Northfield, Cox dropped his charge in the box for a non-winners of one event at the Cleveland oval in late March. Steered by Chris Lems, Big Boss Hill raced first over and paced clear by more than four lengths to win in 1:55.2. The sophomore has competed in the Iron Maiden Series his last two trips behind the starting gate, registering a 1:54 triumph over Northfield’s half before finishing third on April 18.

“If he can just not regress from where he is at, we’ll be happy. Right now, he’s still learning. He still has some little quirks in him. He’ll throw a shuffle in here or there, but he paces right through it,” said Cox.

Big Boss Hill was staked to the Buckeye Stallion Series, but his owners chose not to make him eligible to the ultra-tough sires stakes where he would face the likes of 2020 Ohio 2-Year-Old Pacing Colt of the Year Charlie May and Heart Of Chewbacca. Instead, Friday will be a test that will help clarify plans for the 3-year-old this summer. If he handles the five-eighths configuration well, Cox says his charge could spend time between Scioto Downs and The Meadows once the Iron Maiden Series is complete. A few fair starts are also on the schedule.

“I think he’ll be fine. Virgil probably trained him on the five-eighths last year at his farm and he qualified at Scioto. I’m just hoping the five-eighths will help him a little bit,” Cox said. “He’s not an overly big horse, but he’s a nice size horse with a good gait.”

Big Boss Hill will start from post three in the sixth race on the program. The gelding is the 9-2 third choice in the $17,500 event, guided by Dan Noble.

“I think we’ve got the right driver on him for Friday. I’ve had a lot of luck with Danny,” the trainer said. “There are a couple decent ones in there, but I think Danny’s style will suit him very well.”

Tonight’s outing will be the toughest to date for the sophomore. Regardless of the outcome, Cox likes the characteristics exhibited by his trainee thus far.

“He’s got a good attitude,” he said. “The way I like him is that he likes to pass a horse and he doesn’t like to get passed. He’s got a lot of heart.”