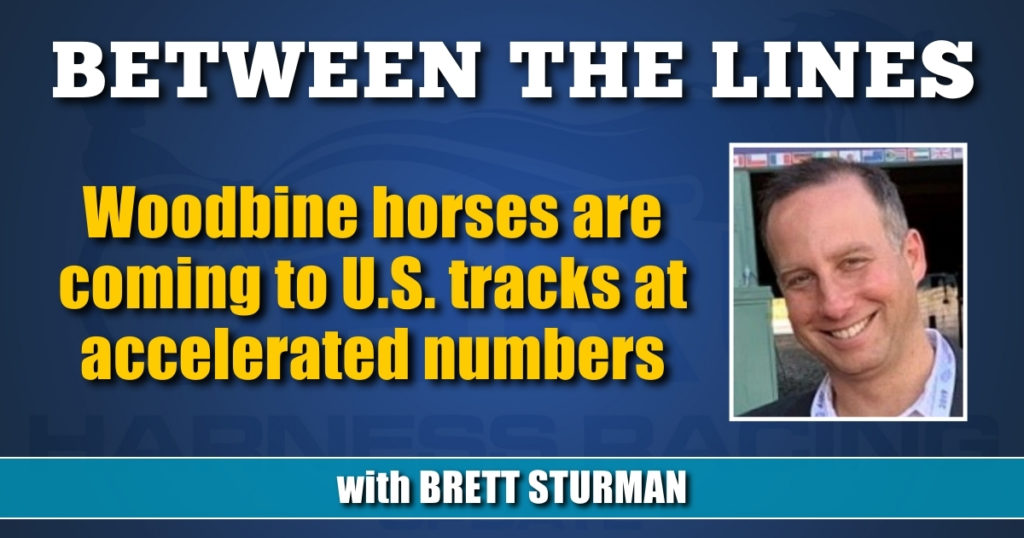 Woodbine horses are coming to U.S. tracks at accelerated numbers

Shutdown-impacted horses throughout Ontario have been migrating to the U.S. in increasing amounts over the last three weeks, and that number only continues to grow as confidence wanes for when racing will be allowed to resume across the Canadian province. As part of the latest extension of the Ontario lockdown, racing has been included in the ban of businesses not able to operate through at least until the currently scheduled date of May 20.

With horses needing to race and able to travel more freely and less subject to quarantine restrictions as people, an influx can be seen this weekend at American tracks. Hoosier Park and Northfield Park are each playing host to a dozen or so horses who have recently raced at Woodbine along with other tracks where Woodbine horses appear in smaller numbers, but it’s the Meadowlands this weekend that’s the highest recipient of horses recently raced at Woodbine.

By my math, there are 35 horses racing this weekend at the Meadowlands who had at least one race at Woodbine during March prior to the shutdown, and that’s not even counting a fresh batch that are qualifying at the Meadowlands Saturday.

The Meadowlands has historically been faced with the prospect of shorter fields this time of year as it faces competition from the recently-opened seasons of Philadelphia and Pocono from PA and Hoosier Park in Indiana, as well as consistent competition across the river at Yonkers. But that’s not seen right now. This weekend, the Meadowlands has 26 races across Friday and Saturday and all of those except two races are full of either nine or 10-horse fields. That’s not attributed entirely to horses coming in from Woodbine, but it’s not hurting either.

No one in the industry wants to benefit by misfortune elsewhere, but the reality is that horses need to race and in the process it helps the tracks that can accommodate.

“It’ll be helpful because we’re all in competition for horses, and any horses that I can get helps,” said Meadowlands race secretary Scott Warren. “I’m writing 3-year-old races that I started last week on the condition sheet and we had a couple of them fill this week. There’s more 3-year-olds qualifying again this week, though the 3-year-old pacing colts I’ll likely never see because they’ll qualify this week and then go right into Pennsylvania as their first sire stake is next weekend.”

Of the Canadian-based horses racing at the Meadowlands this weekend, the biggest name is Sintra who will now race for trainer Brett Pelling. The 8-year-old winner of more than $1.1 million lifetime does have a history here, though has traditionally been campaigned by local connections in Ontario and enters the Meadowlands off back-to-back wins in the Woodbine preferred. In addition, on Saturday the 3-year-old gelding Control Heaven (Canadian stallion Control The Moment) was a Metro finalist last year and now debuts in his sophomore season for trainer Chris Ryder.

Many recently-arriving horses from Woodbine and other tracks such as Flamboro show recent enough lines so having to qualify first before racing hasn’t been necessary. Warren said that standard qualifying rules at the Meadowlands would apply as dates become staler.

Though more horses are arriving, Warren said he doesn’t sense there will be such an overabundance that causes him to re-think conditions or think how to place them. But the addition of any horses, no matter the number, is contributing to larger field sizes and in turn should drive handle.

“It definitely helps,” said Warren of the full fields. “It hurt Saturday night when we had 10 scratches. I found out early in the afternoon and it put me in a bad mood for the rest of the day, but we still did $3.6 million in handle that night. You’ve got to take advantage of the full fields when you can.”

Warren said what’s being seen consistently across the industry is tracks that are racing are picking up the handle where competition has decreased.

“I’ll give you a specific example,” he said. “Vernon Downs started up last week and we raced one day, Saturday. And we did $192,000. That amount at Vernon is like a million-dollar night and that same night two years ago (they didn’t race last year at this time due to the pandemic) we did $54,000 in off-track money. A lot of smaller tracks are all seeing an increase in handle.”

It’s not only the horses who are on the move. Jody Jamieson has announced that he plans to drive at Tioga beginning in May while Doug McNair and Bob McClure are already at the Meadowlands.

“Doug is down to qualify Saturday and has multiple drives both Friday and Saturday,” said Warren. McClure is coming down for Determination (Stables) and he’s said that if he picks up extra work, he’s happy to have it. To me, it’s just going to make the driving colony even stronger and with the mix of a couple new drivers out there will make the racing even better.”

Warren’s correct in that the addition of new blood – both in the form of drivers and horses will help. Despite high handle, many races at the Meadowlands have become predictable and repetitive in horses up front not being challenged through the first half of the races. The new race participants may be able change the dynamic and mix things up a bit, which would further drive handle even more.

In the coming weeks it’s expected that the number of horses coming from Ontario to the Meadowlands and other tracks will grow even more, and those numbers could potentially explode if the shutdown becomes extended once again. In the meanwhile, I’ll be interesting to note how the horses adapt and if they adapt well, if they’ll stay racing at the U.S. tracks indefinitely.