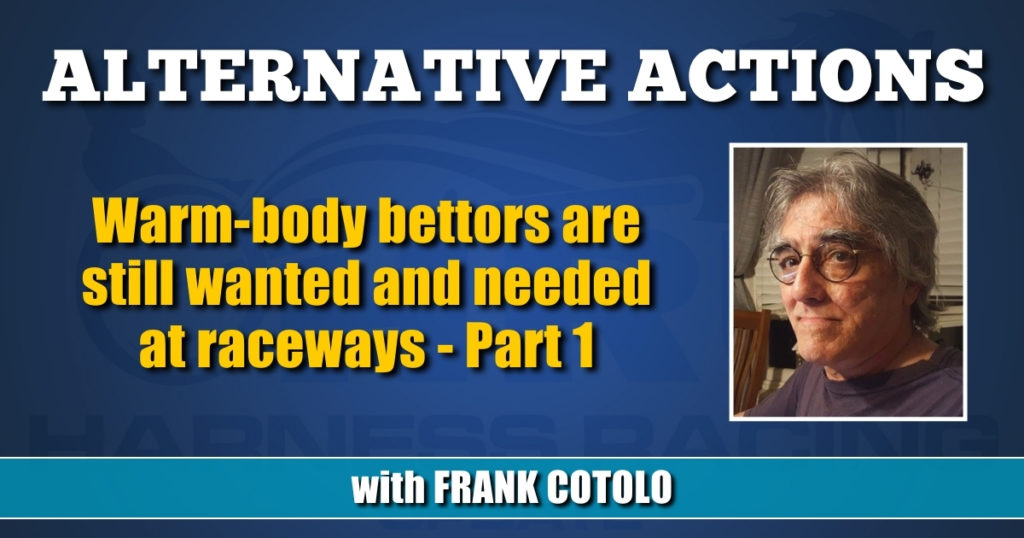 What follows is not an Alternative Actions (AA) nostalgia journey. AA is dedicated to the success of raceway business in its present states (actual and virtual), continuing to suggest methods of marketing and advertising that appeal and can attract more of its core audience — the bettors.

All the bettors are out there, somewhere, everywhere, and during the 2020-2021 pandemic all pari-mutuel raceways have stayed afloat due to betting activity supplied through virtual attendance. More so, empty aprons and grandstands were virtually replaced by the digital platforms that are still swarming with bettors and many tracks have experienced highly increased handles.

As far as racetrack business is concerned, it truly does not matter if it comes from warm bodies on the premises or distant fingers moving along a keyboard or swiping on the face of a smart phone. Money is money and making it matters not where it originates.

Aside from the fact that it is an awful waste of space to have racetrack aprons, grandstands and clubhouses thin with patrons (as has been the case over the last few years) or empty (due to a deadly planetary pandemic), the absence of humanity in any sports theater is nothing less than sorrowful.

Those to whom the sport played before their eyes in three-dimensions with the sound and the fury that signified much are not ready to abandon the idea of physically going to the track to wager while our senses feast upon the experience.

It is frighteningly like the movieOn The Beach. It is a perfectly chilling analogy we hope will end differently in real life.

In the 1959 movie, it is the end of World War III. All of Earth’s territory, save Australia, remains unhabitable. Survivors are aware, though, that the sole continent in which to live will not be safe forever; it is only a matter of time until ill winds soaked with lethal radiation serve the same fate to the remainder of mankind.

Other than the cosmetics of a racetrack, which for decades were adorned by humans in attendance and by the thousands, the theater of horse racing during the pandemic is no longer all brick and mortar. It is presented through the flat and mini-sized images of horses and drivers clippity-clopping over grey limestone circles through zeroes and ones, virtual sans actual, and neophyte pari-mutuel bettors are used to only those tiny one-dimensional replicas.

People in the pre-tech decades had no legal wagering option but to attend a pari-mutuel track in order to wager on horse racing and few if any imagined an alternative and none to my knowledge complained about making the effort to visit a pari-mutuel arena. For generations people were used to “going places” for entertainment as well as necessity demanded they travel.

People’s leisure choices were plentiful and they spent money to get to them, buying gas for their autos and more cash to park them, or on tolls for public transportation. The destinations were restaurants, amusement parks, circuses, rodeos, movie theaters and other paid-to-attend places. Let us not forget expenses connected to be at a pari-mutuel track–the parking, a host of admission prices and the costs of the program and a tip sheet (if you trusted the touts) and food and drink.

By the new millennium it was more of a complement for a raceway to enjoy a live audience since competition for the leisure dollar became fierce and required no travel effort. Money was no longer needed for anything but betting at a raceway, either; admission became free. Parking became free. As well, one track could host tens of other tracks through simulcasting. Yet, even when the former expenses were relaxed, people stayed home by the thousands.

Now, with greater hope for health on the horizon, to accept that live audiences are extinct is pointless surrender. It is simply an audience that is no longer animated but craving to embrace what was normal before the bug went viral, so to speak. An alternative action is required for bigger and better business when comes the decrease of social distancing.

Most track administrations have to address a question they do not seem to be asking these days: What is a live audience worth in the days of digital distribution? The battle is not for the weak of heart. It is not as simple as opening the gates and letting the crowd walk through — paying admission or not. Though the digital platform assisted helping the business of a raceway, once tracks “open” to the general public again, the same power will be in stiff competition for the leisure dollar. In the next part of this series, we will endorse the alternative actions of some tracks to preserve the live experience and offer more–including ideas from readers who work for raceways or do not.