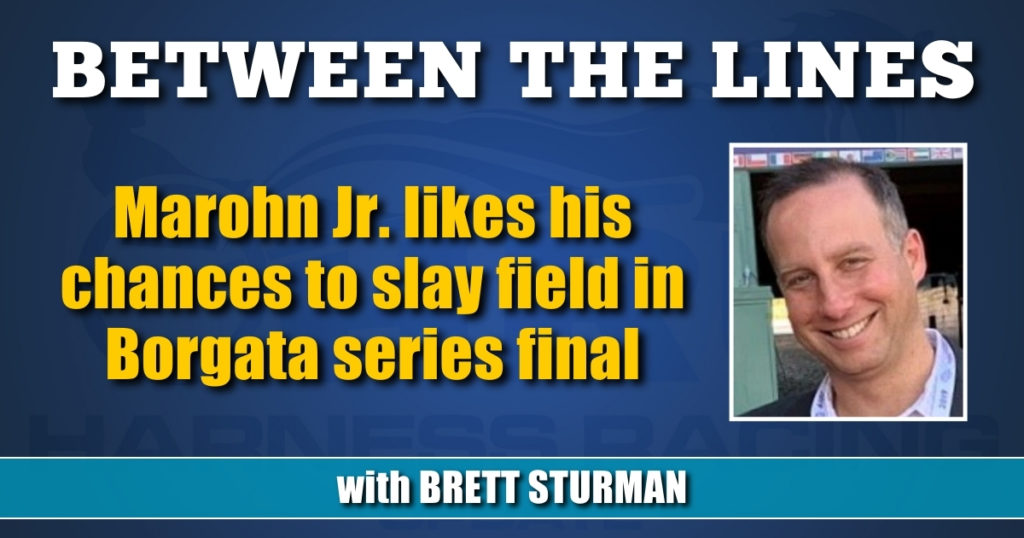 The driver will pilot Hesa Kingslayer N in the $514,000 final that goes Monday night at Yonkers Raceway.

Save for the notable omission of Let It Ride N in the $514,000 Borgata Pacing Series final at Yonkers Raceway, the eight finalists assembled consist largely of the most prominent contenders from the series onset. Going as race 8 on the Monday (April 19) card, which also includes the final for the Blue Chip Matchmaker Series, one of the more intriguing players is Hesa Kingslayer N with a seemingly generous morning line of odds at 6-1.

Both the rail horse, Rockapelo and Hesa Kingslayer N have made Yonkers their home all winter long and are coincidentally rewarded with the top two inside starting slots in a race where post position is almost as important as the quality of horse.

With his early season prowess and an apparent tactical edge in his favor over all rivals except for one, Hesa Kingslayer N has the look of a serious win proposition. Driver Jim Marohn, Jr. has driven Hesa Kingslayer N exclusively at Yonkers since the horse arrived from Hoosier the end of November, and he likes the spot he’s in.

“I’m pretty confident heading into Monday because he’s done really well in the series and to tell you the truth, he hasn’t been roughed up at all,” said Marohn. “I think he’s probably one of the freshest horses heading into the final even though he’s raced in most of the legs. Just the way the races have worked out, he hasn’t gotten tough trips. I like going into a race like this at the end of a long series knowing that my horse is fresh.”

Credit for a fresh Hesa Kingslayer N goes to Marohn, as well as how he’s been managed by trainer Michael Deters. The 8-year-old Christian Cullen—Millwood Manhattan gelding has gone a number of big miles including a 1:49.3 effort at the Meadowlands in February and more than a couple of game tries against this year’s best winter horse, Let It Ride N. Through it all, Hesa Kingslayer N has come out of it no worse for wear. That includes three wins to start off the Borgata series that came off favorable trips, followed then by the luxury of being able to sit out the fourth leg with a spot in the finals already secured.

Despite his wins in races where Hesa Kingslayer N didn’t have to be used particularly hard early, it’s not a direct reflection of his racing style.

“He’s not just a typical come-from-behind horse. He could do anything,” said Marohn. “And he can be aggressive early, but just the way that the races have gone throughout the series, that’s the way we’ve ended up racing him.”

As one of three entries from trainer Ron Burke, This Is The Plan was able to finish ahead of Hesa Kingslayer N last week when they were second and third, respectively, to race winner Leonidas A. But in one and two races prior Hesa Kingslayer N was able to win and get the better of This Is The Plan, including a stretch duel in the second leg of the series. In that race, things were looking good on the lead for This Is The Plan before a methodical push from Hesa Kingslayer N became more relentless. As Marohn explains it, “When Hesa Kingslayer came out (at about five eighths), he initially kind of waited for me to tell him what do. I didn’t come out of the hole too aggressively with him and I didn’t want to put up a big run on the backside. I wanted to save him for whatever I could from the top of the stretch to home. And so, it wasn’t really the horse, but it was more of me waiting to use him.”

While This Is The Plan had the misfortune of drawing the outside post 8, Leonidas A — who is unbeaten since November and 4 for 4 in the Borgata series — didn’t fare much better, drawing post 7. The strategy from the outside will be fascinating because neither of these two necessarily have to leave. This Is The Plan flew from nowhere last week to make it close, and that rally from Leonidas A to outkick Bettors Wish in last November’s Potomac Pace still stands out.

That said, if given the choice, starting with an advantageous post can’t be overstated.

“I’m very happy with where we drew, with some of the other major contenders on the outside,” said Marohn. “I don’t really have a specific plan heading into the race though. I’m happy to know that my horse can do anything, not being a one-way horse. Those horses from the outside – if they want to get involved in the race, they’re going to have to get involved from the race pretty hard. And also, Rockapelo off the rail. He’s no slouch, and he’s a much better horse when he’s on the lead than when he’s not. So, I don’t know how that race is going to unfold heading into the first turn. I’m going to have to wait and call all of my plays then.”

Pre-series favorite Let It Ride N is racing on the Monday card too, but in the $100,000 Borgata consolation instead of the final. And even in that race, he may have his work cut out for him. Though he won his first leg, there were ominous signs in the weeks that followed, and it speaks to the challenges of racing through a series. In regard to Let It Ride N, “That’s just something you never know,” said Marohn. “And that’s what makes this such a tough series to go through. It’s six weeks. It’s not just one elimination and then a final. Plus, going around a half mile track it’s the easiest with how fast these good horses have to go.”

Other possibilities include Western Joe who has really shined, and I’d say overachieved as well in recent weeks at age 7 after having not been known prior for small-track success at this level. Backstreet Shadow is Burke’s third entrant in the race, and one who probably will show early speed from post 6 with Tim Tetrick, having both of his series wins coming on the front end.

“Any horse could win this race. They’re all very good horses in there and there’s no huge standout. The race could play out 3 or 4 different ways and depending how it goes anyone could win that race,” he said.