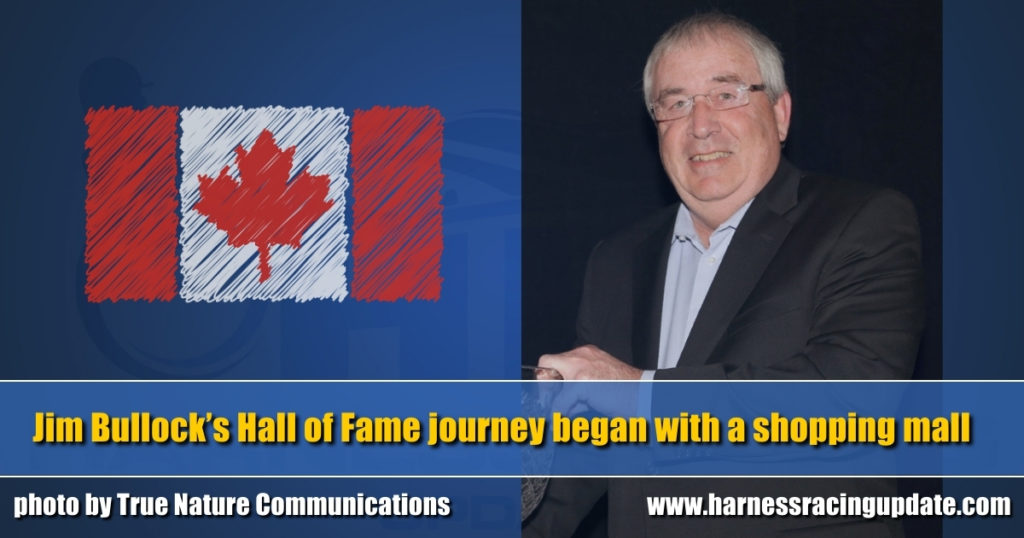 The 35-year journey that led Jim Bullock to the 2021 class of the Canadian Horse Racing Hall of Fame started with a shopping mall.

“I built the Woodbine Centre across from Woodbine and bought the land from the Ontario Jockey Club for Cadillac Fairview. Around the same time as it opened, I bought a farm north of Milton as kind of a weekend place because we didn’t want to do the commute that most people do with cottages,” said Bullock, who would go on to serve as the president and CEO of Cadillac Fairview from 1987 to 1993. “And I mentioned it to the people at the Jockey Club one day while we were meeting and they said, ‘Oh you’ll have to get a horse.’ And I said, ‘Well I’ve always liked the horses.’ They thought I was talking about thoroughbreds and I said, ‘No, no, I used to go to the track up at Peterborough when it first opened, and I always liked the standardbreds.’ Then Jack Kenney introduced me to Pat Crowe and that’s how I got started.”

True Nature Communications | Jim Bullock will be inducted into the Canadian Horse Racing Hall of Fame as a builder.

The newly-introduced pair partnered on a 3-year-old pacing son of Brigadier General, and when Renrag Curly won his second start at Greenwood Raceway in 1986, Bullock was hooked.

His enthusiasm for horse racing and business acumen saw the new owner nominated to the board of the then Ontario Jockey Club in 1989, where he would serve until 2004. Three years later, Bullock and his late wife, Pat, launched Glengate Farms in Campbellville, ON on the foundation of the former Cantario Farms. The learning curve from racehorse owner to breeder proved to be steeper than Bullock had imagined however, and he was soon appealing to Pat for help.

“Shortly after we bought the farm I began to realise that this is more than a part-time investment. After a few moths I said to my wife Pat — who was quite happy doing pottery and gardening and living a nice life north of Milton there — ‘How’d you like to start going to the office over there at the farm every day until we figure out what’s going on,’” said Bullock. “For someone who had really no background in the business she really did do a remarkable job there from 1992 to 2006, and the farm wouldn’t have been as successful as it was, or is, without her.”

In 1993, Bullock would take on the role of president and CEO of Laidlaw Inc., remaining there until 1999, and, thanks to her unexpected immersion in harness racing, Pat was appointed to the Ontario Racing Commission in 1997.

“I tell the story that somewhere around 2000, after we’d owned the farm for seven or eight years, I was at the North America Cup at Woodbine and Charlie Armstrong was standing talking to Stan Bergstein at the reception and I was walking by and I said, ‘Hello Charlie.’ And he said, ‘Oh Jim, you know Stan Bergstein.’ And I said, ‘Well I certainly know Mr. Bergstein, I don’t think he knows me. Hi, I’m Jim Bullock.’ And he said, ‘Oh yes, you’re Pat Bullock’s husband,’” said Bullock with a laugh. “So, for three or four years after that I used to kid and I would introduce myself as Pat Bullock’s husband. She had the high profile with the racing commission and everything.”

From 1992 to 2006 Glengate Farms operated a full service standardbred nursery, standing stallions such as Balanced Image, Apaches Fame and Angus Hall — inducted into the Canadian Horse Racing Hall of Fame in 2000, 2000 and 2019 — and breeding and raising horses such as Art Official, JL Cruze, Odies Fame (Hall of Fame Inductee, 2016) and Great Memories, who will also enter the Hall of Fame this summer.

“I guess the two things that happened through the early years on the breeding farm was Balanced Image really began to hit his stride as a very successful stallion, which led us to the opportunity with Angus Hall, and then he was a big success as a stallion, which is never guaranteed,” said Bullock.

“And then the other great success as a breeder I had was that the two individuals that made the most money racing would be Odies Fame ($1,410,720) and Art Official ($2,085,185), and I sold both of those as weanlings. And sold the mares at the same sale,” said a rueful Bullock. “I planned on going back and seeing if I could find what we sold Great Memories for, but it certainly wasn’t very much. The fortunate part is the horses don’t know what they cost.”

In spite of his modest launch from the Glengate fold, Art Official would provide Bullock with one of the most thrilling moments of his career as a breeder, capturing the 2008 Meadowlands Pace by a neck in 1:47 over the great Somebeachsomewhere.

Bullock has also enjoyed success as a racehorse owner with trainer John Bax in recent years and John Kopas in the early days, but said the real highlight has been the relationships he has developed with other members of the horse racing industry.

“Most of all, I really think that the people in the business, in general, are a terrific group and I’ve enjoyed the camaraderie, the doing business with them and just the friendships I have developed in the horse racing business the 30-plus years I’ve been in it,” said Bullock. “And, I think we’re very fortunate here in Ontario in particular to have a very strong program that others before, and I’m sure others after me, will contribute to.”

The Bullocks wound down the Glengate operation in 2006, as Pat began a battle with Alzheimer’s that would lead to her passing in 2019, and eventually sold the farm to Bax in 2015. For a number of years, Bullock boarded a handful broodmares with Sue Zammit, but in 2013 he decided to return to the breeding game and recruited Zammit to manage a former thoroughbred farm near Erin, ON.

“About 2013, I kind of said to myself, ‘I could be around for another 20 years, why don’t I do what I enjoy?’ So, I bought a farm and started adding to the broodmares. I’m back up to 30, I’ve focussed completely on trotters and I enjoy it. Sue Zammit does a terrific job running the farms day-to-day and getting the yearlings raised and ready for the sales and that type of thing,” said Bullock. “We’re about as big as we’re going to get, 30 is lots, and we’ve really been focussed the last I’d say five years, since we bought the farm, both building the number of mares, but also dramatically improving the quality.”

Of the things that he would like to add to his Hall of Fame resume, winning the Hambletonian comes out at the top, but Bullock has always been philosophical about his chances of success in any aspect of the racing game.

“I used to tell the new owner’s groups when I would meet with them that you have to learn to be a good loser in this business because it’s like baseball, if you’ve got a horse that wins three out of 10 you’ve got a really good horse. You better get used to not going down to the winner’s circle and really enjoy it when you get to go down there,” said Bullock, who served on the Standardbred Breeders of Ontario Association board from 2000 to 2009 and was instrumental in the development of the SBOA’s New Owner Mentoring program.

“I’d like to win the Hambletonian. We buy a horse every year that we think is our Hambo horse, so winning a big race like that would be something I look forward to. If it happens that would be terrific, but I can still enjoy the business if it doesn’t. I was going along enjoying it nicely when I found out I was nominated to the Hall Of Fame. That certainly wasn’t on my bucket list. It was a genuine surprise and a very pleasant one.”

Although Bullock is not serving on any industry boards in his 77th year, he has been deeply involved in the lawsuit the Ontario breeders launched — and received a favourable judgement on — against the Province of Ontario. Bullock expects the settlement to be finalised before the end of 2021 and said if there was another project he could contribute to in the future he would be up for the challenge.

“I don’t think I will ever retire; I’m still engaged in my real estate business as well. Mind you, you have to have another business if you’re in the horse business,” he said with a chuckle. “It would depend what the issue was, obviously. I don’t think at this stage in my life it makes a lot of sense to be a director or an officer of one of the associations. I think younger people should be in those roles, but if there was a particular task force or something that my experience might be beneficial to, sure I’d like to participate in that.

“It’s a fun game. I’ll be at it probably for whatever time I have left here, and hopefully it’s for many years.”