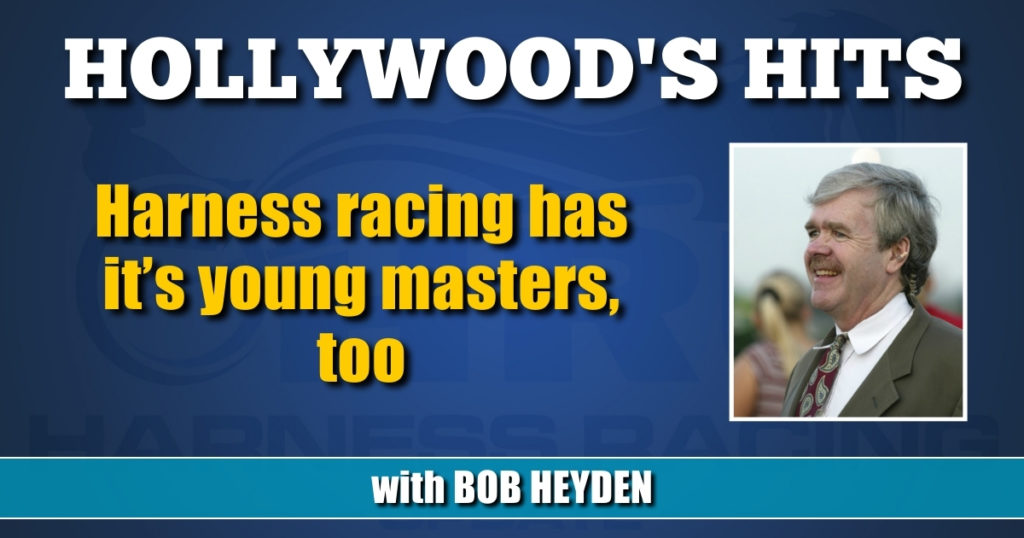 Can we agree that the biggest event in golf is the Masters and in harness racing it is the Hambletonian?

If both are true, youth has taken over both — at least somewhat.

In an unprecedented finish, the top five in the 2021 Masters were all under the age of 30:

In The Hambletonian, three times in the last five editions the winning driver has not yet turned 30:

In the 90 prior editions of the Hambletonian it happened just three times:

Marcus Melander is 29 this July. No one besides Melander has gotten money in their 20s in each of his/her first four Hambletonians.

It works the other way, too, sometimes.

How about a couple of guys who will soon be knocking on the $100 million in lifetime earnings: George Napolitano, Jr. and Corey Callahan?

Others who achieved glory at a ‘later’ age for the very first time include:

• Cat Manzi, who won his first million-dollar race at age 53 in 2004 winning the North America Cup with Mantacular.
• Roger Hammer was driving in his 42nd season when his one and only Hambletonian appearance ended with him winning it with Vivid Photo at age 59.
• David Miller, the leading active money winner in the Breeders Crown — and in racing overall — did not capture his first Crown until just four months from his 36th birthday (Magician — 2000).
• Chuck Sylvester did not even enter the Hambletonian until age 41 with Diamond Exchange in 1982.
• All three Ron Gurfein Hambletonians came while in his 50s.
• Jimmy Takter had one Hambletonian win up to age 48, then had three from 49-54.

Winning a dash title nationally and a million-dollar race, too. Seven have done it, only two in the same season.

Jack Moiseyev did it first in 1991 when he led in wins, money and captured both the million-dollar Meadowlands Pace with HOY Precious Bunny and the Hambletonian with Giant Victory.

Tim Tetrick repeated that in 2007 when he too led in wins and money and twice won a seven-figure event with Southwind Lynx.

We just passed the anniversary of the Titanic sinking on its maiden voyage in 1914 (April 14).

Some other maiden events through the years include:

• Assault in 1919 became what would later be known as the first Triple Crown winner. He was a maiden in the Derby that year.
• DON Galbraith broke Niatross’ maiden in the spring of 1979 at Vernon Downs.
• Trevor Ritchie was a maiden breaker supreme in 2000. He won his first three Breeders Crowns that year andthe Hambletonian with Yankee Paco in his very first try.
• Ray Schnittker was in the bike for Gallo Blue Chip’s first ever win in 1999. First start out of the box.
• Muscle Hill got beat a neck in his 2008 New Jersey Sires Stakes debut his first time ever in a race. He then won the final 20 starts of his illustrious career.
• Peter Wrenn came to the Meadowlands in 1994 for his first night of action and upset the Haughton Memorial Final apple cart with Under Orders ($66).
• Pegasus Spur was second to Scarlet Knight in 2001 in the Hambletonian. The outstanding Stillings trainee never won a Meadowlands race.
• Escort won the first ever Meadowlands Pace in 1977. Art Official won perhaps the most memorable Meadowlands Pace in 2008 over Somebeachsomewhere in 1:47 (world record time). Both colts were 0-15 as freshmen.
• New Lew won a maiden race on April 20, 1978 at the Meadowlands. He won on that Thursday night, but was eligible at the time of entry for a Monday night maiden which he also won. That necessitated a rule change so that no horse could twice win a maiden contest.