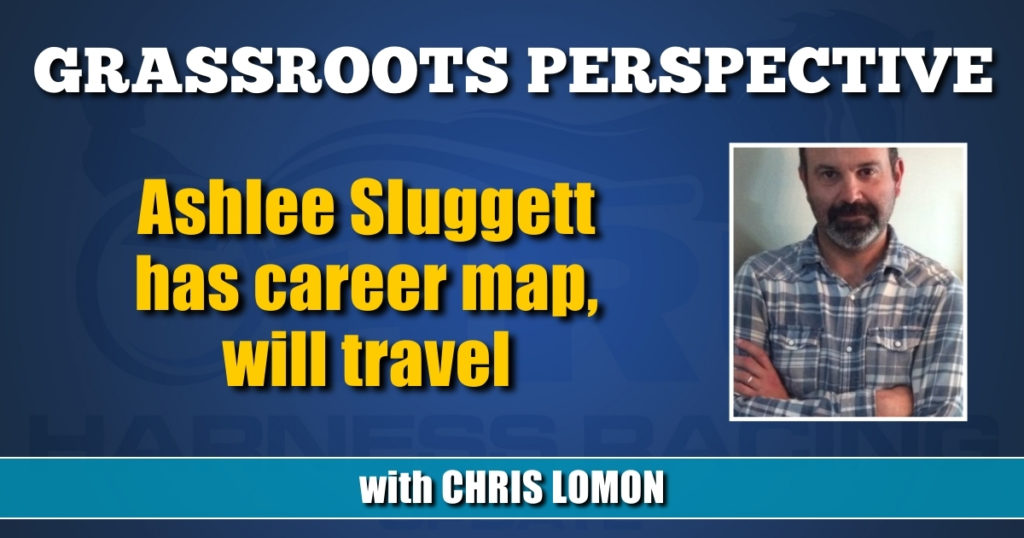 She doesn’t know where she’ll wind up, but Ashlee Sluggett has her career path meticulously mapped out.

It’s only fitting that the Alberta-born horsewoman and standardbred sojourner, the one who hopes to have a mid-size band of trotters and pacers of her own one day, will soon be on the move once again.

Now that she’s wrapped up a highly successful meet in the role of trainer at Cal-Expo, Sluggett is readying to head to New York, specifically, back to the barn of trainer Blake MacIntosh where she’ll work as a groom.

“I came down here with six,” said Sluggett. “I bought a couple horses from Running Aces [Minnesota] and Alberta, and brought them with me to California. I think I would be able to say that I had a pretty successful time at Cal-Expo.”

She most certainly could.

To date, Sluggett has sent out six winners and 21 top-three finishers from 57 starts in her sophomore training campaign.

“Relentless Dancer is just a classy, nice old mare. She wasn’t tricky to deal with. She’s just so honest, which obviously helps you as a trainer. Lamy Chops, he’s probably my favorite. When he came to me, he wasn’t an easy horse to drive. He was a bit uncontrollable in every way, actually. With the changes we made, working on his teeth, just figuring him out, it’s so great to see him doing well.”

On March 28, Lamy Chops, bred by Cory Manning of Belmont, MB, teamed with driver Luke Plano for a neck win in a lifetime-best 1:58.2 at Cal-Expo.

It was the second win from 37 starts for the well traveled horse who broke his maiden in September 2019 at Holland Fair in Manitoba.

“He had been racing okay since I got him [in the fall of 2020], but he’s just been getting better and better now. I think one of the most rewarding things as a trainer is taking horses that have some issues and working with them to figure it all out. It takes time and patience, but when you see them out on the racetrack and they are a totally different horse, you take a lot of pride in seeing that. And when they win, it’s an even better feeling.”

Relentless Dancer and Lamy Chops will race at Running Aces, while Sluggett is looking to have one horse of her own to compete in New York.

It can be a busy life, literally, a cross-country trek at certain points of the year, but Sluggett is happy to be wherever she happens to be.

The same sentiment applies for whatever role she finds herself in.

“I can be a groom and look after the horses on a day-to-day basis, I can go out and train, or I can drive the trailer – I’m lucky that I can do a lot of different things. I think that really helps in so many ways. It certainly teaches you a lot of different lessons and skills.”

The 31-year-old, who has been around horses almost her entire life, including time spent in the show jumping and eventing worlds, was 19 when she joined the standardbred ranks. Sluggett had read in the newspaper that a new racetrack, Alberta Downs, was being built in Lacombe, just 15 minutes from her home, and decided to check it out.

She met Jamie Grey there and soon began working for him, learning the harness racing ropes from the respected horseman.

“It was great to have that education, to really immerse myself and get to know something new every single day.”

Sluggett went on to spend nine years working with driver/trainer Ryan Grundy, and has also worked for Kim and Quentin Schneider.

“The Schneiders offered me a job last year, and last spring, I began working for Blake, right through the summer. The chance to come back to California came up again, so I brought a few of my own and things worked out well.”

Although there’s plenty of racing left in 2021, Sluggett, who posted two wins and 11 top-three finishes from 25 starts in her rookie 2020 campaign, is hoping to take her own horses to Florida this winter. Contesting some dashes at Running Aces isn’t out of the question either.

“I wouldn’t mind going to Minnesota one day, but for now, I’ll just send the horses. Any time you have the chance to see different racetracks and get a feel for the racing, it gives you something to think about it.”

Soon enough, Sluggett will be in a New York state of mind. Future goals will also be on her mind, too.

That happens to be the case wherever she is on the map.

“I would love to have a medium-sized stable of 10-12 horses. I’m not sure where I would want to race. There isn’t one particular track, at least right now, where I am thinking I’d like to be. I’ve been very fortunate to have been to a lot of great tracks, but at this point in time, I’m not sure where I’d eventually like to end up at. The hope is to have my own barn and to be successful. As far as where, that could be anywhere.”