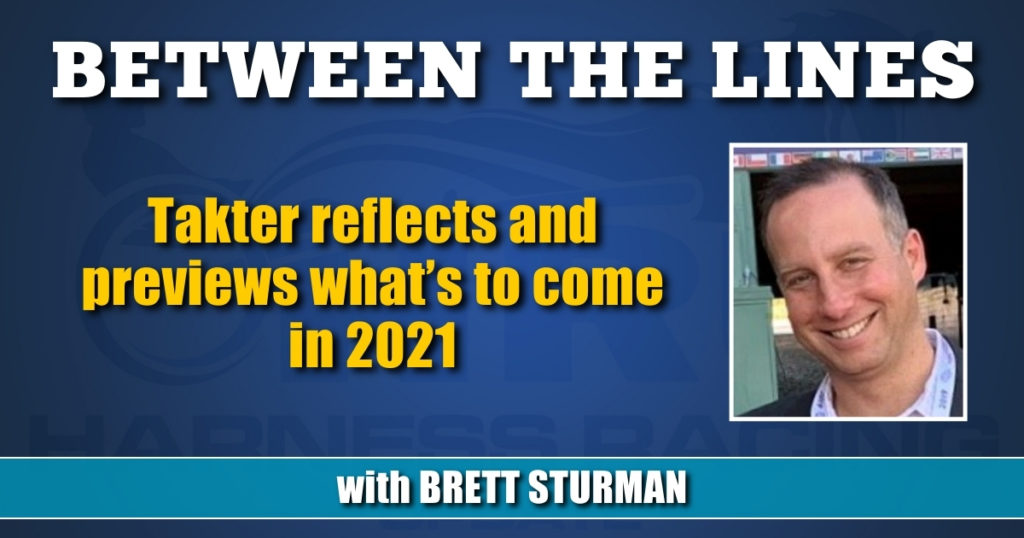 Takter reflects and previews what’s to come in 2021

Reigning Trainer of the Year Nancy Takter breaks down some of her potential stars.

I caught up with reigning trainer of the year Nancy Takter on Saturday (April 10). Coming off a record season in which horses from her barn earned over $8 million while producing a monstrous UTRS of .441, Takter was on her way to the Meadowlands to train 10 horses there and then qualify another six. Here’s what she had to say as her stable gears up for another big season.

Of your horses qualifying at the Meadowlands Saturday, Fortify and No Lou Zing were colts that impressed last year at 3; particularly No Lou Zing who really developed into a fast horse as the year went on. Similarly, last year’s 2-year-old pacing colt Always A Miki stepped up with a huge effort to win in the Governor’s Cup to close out the year. How have those horses come back?

“All three of them are coming back really nicely. Today (Saturday) is just their first start back so we’re not going to be crazy out there. They’ll get two qualifiers before they race. I would say for 90 per cent of the time, aside from some unforeseen circumstance, I always try to get everyone two qualifiers. So today, we’re just going to race them maybe a little bit from behind and have them finish well. But all three have trained back good and have all matured nicely. With Always A Miki, he’s not a very big guy. He didn’t grow much height-wise, but for sure he’s filled out. He’s a little bit of an overachiever so I guess he’s my biggest question mark going into 2021, it being a question of much does size matter, because he doesn’t have a lot of it, but he’s got a big heart so hopefully that outweighs some of the physical stature. If you have a horse like One Eight Hundred or Summa Cum Laude coming up on the outside of him, I’m sure he looks small then, but he does have a big gait to him and so he covers a lot of ground. Covering ground and covering it quickly is what makes you fast, not necessarily your size.”

Speaking of One Eight Hundred (highest priced yearling pacer ever at $800k), he couldn’t have looked any more impressive last week at Pocono in the Bobby Weiss series. Last year, he showed some flashes of high speed, but what’s been the difference you see in him between now and last year?

“He trained down really well last year, and I had really high expectations for him. He was big though and he ended up with a little bit of a chip in his left front ankle last year that they had to take out in June, so we lost some time there and it messed up his season just a little bit, and we were playing some catch up and so forth. And in the Red Mile (the race where he went to the half mile in 52 seconds) I had a closed bridle on him that day and he just kind of took off. It was probably more my fault than anyone else’s fault just because he got a little too revved up. I just trained him this morning and it’s just amazing that a big horse like that – because he’s on the opposite side of Always A Miki; he’s a really big horse — (is) so light on his feet, and I swear that he paces a turn better than any horse I’ve ever had in my entire life. And so, the way he paced that :26.1 final quarter at Pocono last week; you don’t see that often. He’s come back super nice. I’m happy with him and I’m actually happy with myself that I stopped with him after that Lexington race. I never turned him out, but I didn’t race him anymore after that mile. Because I think after that experience, if I would have kept pushing him, he would have gone the wrong way. These Somebeachsomewheres are tough as nails, but their feelings can be nimble and if they get hurt (mentally) it can take them a while to bounce back from it. He’s been straight super all winter and he has unlimited potential so I have to hope that he stays healthy and sound; that’s usually the deciding factor with these 3-year-olds because they race so hard for so many weeks.”

When you’re training a horse like One Eight Hundred or any of these other higher-priced younger horses, does that come with any additional pressure for those horses to perform, and is your approach different at all with those horses?

“No, it’s not really any different. As soon as they enter my barn and we throw a harness on them for the first time, they’re all kind of at square one. I never really think about the price tag on the horses. I have owners that are all experienced owners, and they know what they’re getting themselves into when they pay a lot of money for the horses. There’s no guarantee that a more expensive horse is going to be better on the racetrack. Always A Miki was only $40,000 so you just never know. You have to train all the horses the same. Some people, I think if they do feel some added pressure, they try to be more careful, but I don’t think you can do that because these horses need to be tough and they do need same education and sometimes need to get their asses kicked a little bit so that they know what they’re supposed to do. You have to treat them all the same.”

I know you signed as the buyer for a number of yearlings last year from Timonium and from Lexington, including a pair of high-priced Muscle Hills. What are your 2-year-olds looking like so far from what you can tell?

“This is the biggest group of 2-year-olds that I’ve ever had, having 40 of them. And this is the first year I’m ever going to say this, but I’m actually really strong on trotters, which is kind of odd. My dad was always very strong on trotters and I never really was, but we were able to purchase some really nice trotters this year. We have the Muscle Hill brother to Greenshoe, who is a very nice colt. He’s a high-speed colt but he’s very smart… Greenshoe wasn’t always that great mentally and that kind of got to him as a 2-year-old. He was hard to manage a little bit, and they (Melander and team) did an excellent job with that one, he could have gone the wrong way completely. But this colt is super smart and the nicest, smartest colt to be around, so I’m hoping for big things from him. I have the brother to Venerate, who is also nice. There’s a nice Muscle Hill colt named Looks Like Moni, out of That’s All Moni, and he’s a nice-looking colt, too. On the trotting filly side, I have a Walner filly named American Beauty out of All The Time. There’s a Muscle Hill sister to Panem that’s looking really good. I also have an Always B Miki colt out of JK She’salady, so that’s a full brother to JK Alwaysbalady. There’s a few nice Sweet Lous that we bought at good prices for around $50,000 that I’m also really happy with. On the pacing filly side, I have three very nice Captaintreacherous fillies, a nice Always B Miki filly out of Idyllic Beach, and any one of them could be anything. And it’s kind of getting down now into the training. They all trained down nicely as a group, and everyone has been in between 2:20 and 2:15 at this point. They’ve kind of all trained down strong as a group and the groups held together really well, but I would say in the next four weeks is really when you can start to see some separation between the big boys and the big girls from the rest, so it’s an exciting four weeks ahead.”

What are your thoughts on replicating last year’s dream season, knowing that you’re losing horses such as Dan Patch winners Tall Dark Stranger and Kissin In The Sand?

“Obviously, it’s hard to see Tall Dark Stranger and Kissin In The Sand go. Those two alone made almost $2 million last year so it’s hard to replace them, but at the same time my barn is bigger than it was last year. I only had 45 horses that raced last year and now I have 79 horses, so as far as numbers go there’s more there. I think I actually like this group of 2-year-olds as a whole better than the group that I had last year, so I think there’s a lot more potential in that group. But in the same sense I’m happy with the way that I get to race some of these 4-year-olds back like No Lou Zing, Fortify, JK First Lady and Peaky Sneaky; they’re all coming back I think that they’ll make a good impression of themselves in the open ranks. And then I’ll have a few horses from Diamond Creek that I didn’t train last year that I think will be nice horses, like Altar. She won the New Jersey Sires Stakes final last year for 2-year-old filly trotters and I have her in training now. But, like I said, it’s tough to lose those guys, but you can’t live in the past. You have to look at what you have now and towards the future. There’s no guarantees in this sport. If you look back at this time last year nobody knew who Party Girl Hill was. So maybe there’s a new one of those in my group, you can always hope for that.”