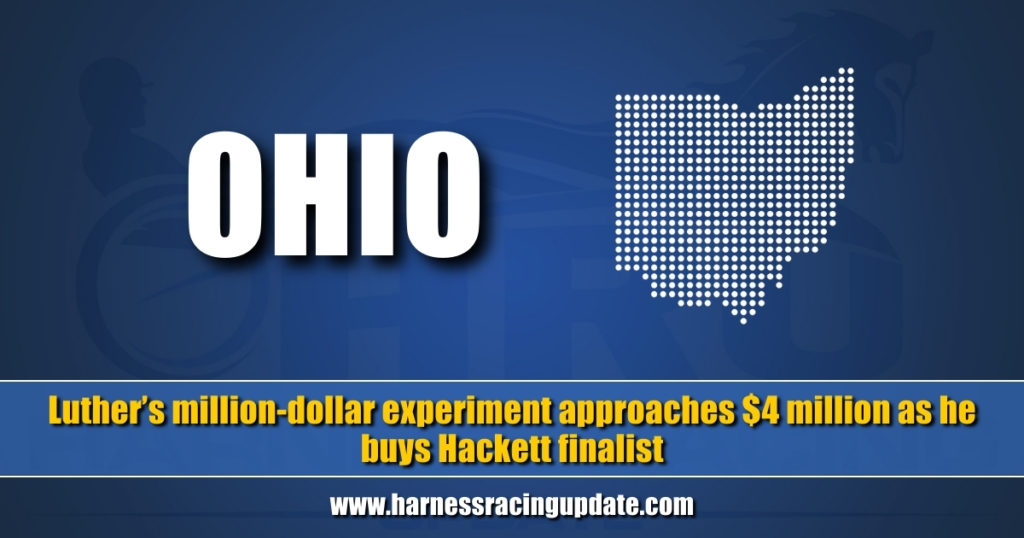 When Katie’s Lucky Day lines up behind the gate in Monday’s (April 12) $40,000 James K. Hackett Memorial championship at Miami Valley, she will do so under new ownership. Days after winning her Hackett elimination for owner and trainer Bill Cottongim, the trotting filly was purchased by Greg Luther’s Black Magic Racing LLC. Luther, who last fall embarked on a “million-dollar experiment,” (full story here) continues to add horses to the stable, trained by his brother Todd, and his spending spree is now approaching $4 million since last September.

“It’s a little bit of an addiction,” said the real estate coach and marketer based out of Reynoldsburg, OH. “Originally, I wanted to do the yearlings, try to do an even million-dollar experiment to see what we can create as far as pedigree, conformation, that type of thing, in an effort to develop some Grand Circuit stock. In the meantime, while doing that, I started seeing a lot of horses that were already Grand Circuit caliber that were 2, 3 and 4-year-olds, so I started acquiring some of those, too.”

In January, Luther purchased 4-year-olds Captain Kirk and Chief Mate at the Tattersalls Winter Mixed Sale, spending $435,000. Earlier that month he acquired Adios victor Catch The Fire. In March, Luther purchased Indiana-sired Dojea Gizmo after the open pacer won his 4-year-old debut at The Meadowlands in 1:50.2.

Luther currently owns 54 horses, 20 of which are babies, and has a goal to build the stable to between 70 and 80 trotters and pacers. Construction is underway on a 50-stall barn at Virgil Morgan Jr.’s Winner’s Circle Training Center that will allow for nearly all Black Magic Racing horses to be in one place.

“For the last 25 years I’ve mostly been in the claimers. Over the last seven years I’ve gotten more into the yearlings,” Luther said. “This is the first year I’m really going big. I’m trying to give my brother every shot to get to the big time.”

While his ever-expanding experiment is an aggressive approach to reaching the Grand Circuit, so also is his pursuit of top-caliber horse flesh. In a business where horsepeople make the rounds and closely follow qualifiers and early races looking for horses to acquire, Luther is employing different tactics. He recently launched the website sellmyhorsenow.com, where an owner can submit a horse, asking price, and a few other pieces of information. Luther, in turn, reviews each submission and either says ‘Yes’ or ‘No.’

“I actually just put together the website in an effort to try to buy horses because I’m always looking to buy and it’s always been a call around and see what’s for sale type of thing,” he said. “My brother posted it on his Facebook page one time, that was it. I think we’ve had 80 or 85 submissions in a week. They just give me their price and I tell them yes or no. It’s given everyone a chance to eliminate needing to wait for an auction or pay commissions. I think I bought five of them so far and I’m talking to four or five others.”

Part of the website reads: “We are currently buying high end horses that are currently racing. Prices anywhere from $25,000 to $500,000 are considered.

“If you’d like to sell your horse immediately, for absolute top dollar with no commissions or fees, simply enter your information below.

“You will generally have a yes or no answer within hours and we can immediately wire you the funds for purchase.”

Despite his online presence, the Ohioan still employs the tried-and-true methods to build his stable. After Katie’s Lucky Day scored in 1:56.1 in her second seasonal start April 5, Luther reached out to Cottongim to inquire about the filly. Luther also owns Incomeorexpenses, which he purchased as a yearling. Incomeorexpenses finished third in the other Hackett division to favored Ozma. Cottongim’s asking price turned out to be higher than expected, but Luther felt the Uncle Peter—Yansky filly was worth it.

“In the Hackett elimination I saw that Katie’s Lucky Day raced great. She came from way back, was two lengths off at the start and still won the race. I figured, ‘Hey, things are good right now, we might as well take a shot at it and see if we can get another good one for the year,’” said Luther.

As a freshman, Katie’s Lucky Day won six of 12 seasonal starts and finished off the board only twice. She was a gate-to-wire winner last fall in the $75,000 Ohio Sire Stakes consolation, covering the Northfield Park oval in 1:56.2 as the second choice. This season she trotted fifth in her sophomore debut before capturing her Hackett division.

Katie’s Lucky Day has drawn post nine in Monday’s $40,000 final. Incomeorexpenses, Luther’s other hope, will line up fourth. A top-four finish will automatically qualify the fillies for the $50,000 Scarlet & Gray Invitational on April 23.

Luther has poured millions into the stable over the last handful of months, with another $350,000 in stakes payments due shortly. Monday will serve as the first test for his “experiment” during a long stakes season. Besides the Hackett championship, Chief Mate will slug it out in the fifth round of action in the MGM Borgata Pacing Series at Yonkers. The pacer also has the Graduate Series on his slate in the not-too-distant future.

“My brother jokes with me that I’m eventually going to be on an episode of Hoarders. I call myself a collector, he says I’m a hoarder,” said Luther, laughing. “It’s starting to turn into a lot of fun as summer is right around the corner. Stakes season is here now and it’s starting to get exciting.”