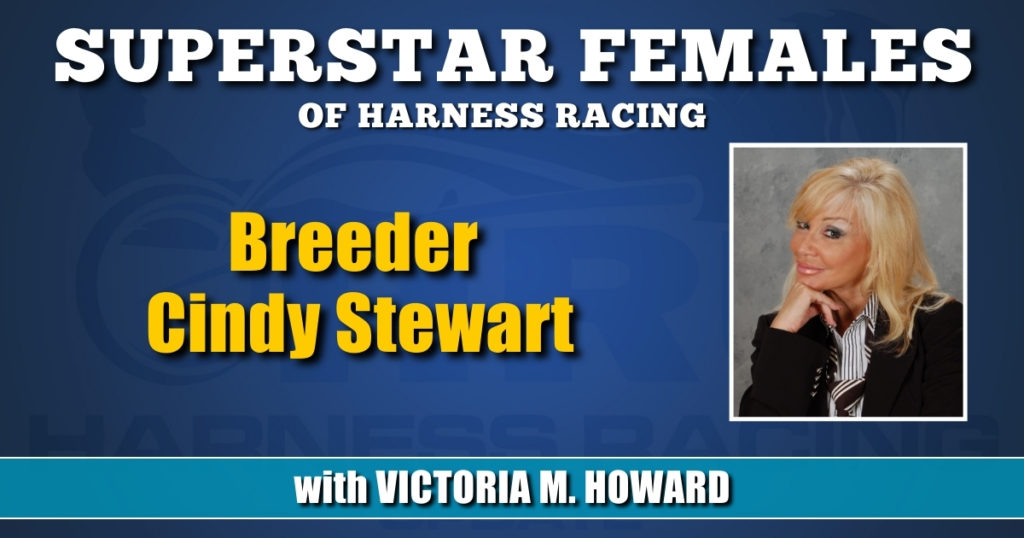 Hunterton Farm, one of harness racing’s finest breeding farms, is located in Paris, Ky. Numerous champions have been bred, born, and raised on the historical land that was once known as Stoner Creek.

In 1980, the farm sported 80 acres, but today covers 900 acres that spread across three farms; the majority is on the Stoner Creek Stud farm where the great Meadow Skipper stood and is laid to rest.

Hunterton is owned and operated by Steve and Cindy Stewart.

“Steve and I have leased the farm from Margareta Kleberg since 1996 after the passing of Norman Woolworth,” Cindy said. “The history of the farm is unsurpassable. There is a beautiful cemetery where the great Meadow Skipper and Nevele Pride are buried, along with the ashes of Mack Lobell who we stood two years before he went to Sweden. There is also the 1943 thoroughbred Triple Crown winner Count Fleet that was owned by John D. Hertz (who built the farm in 1938). Stoner Creek comes with a lot of history, which Steve and I were conscious of and worked very hard to keep the legacy going.

“Stoner Creek had produced five Hambletonian winners who were born on the farm before we got there and have added two more with Trixton and Forbidden Trade. We are hoping for a third this year with Venerate.

“That doesn’t count the Jug, Jugette, Metro, and Meadowlands Pace winners, etc., and we are working on making that list longer.

“Surrounding the stallions in a horseshoe of gravestones are the dams of the Hambletonian winners, as well as Pizza Dolce, Annecrombie, Duenna, and Classical Way,” said Cindy. “It’s really something to see.”

Indeed, it is. When I was writing the book Meadow Skipper with Bob Marks, I flew to Kentucky to take photos and gather information and was lucky to have met Margareta Kleberg herself. What a classy lady.

The farm is exquisite and if you ever get a chance to visit, I suggest you do.

HOW IT ALL BEGAN

So how did a girl born in Clarksville, TN, come to live every girl’s dream?

“My father was in the army and stationed in Tennessee. We spent three months there before he was transferred to Germany, then moved around a great deal when I was young. I attended nine elementary schools, two high schools, and two universities before landing at the University of Kentucky, where I met Steve,” Cindy said.

“We were both attending a fraternity party when he walked up to me and asked if he could buy me a beer! Comical — for the beer was free to everyone! But that’s Steve. He’s always been a charmer.

“Up until I was 16, I was in a ballet performing company in Northern Virginia. I really enjoyed it, but decided not to pursue it as a career.

“I considered becoming a veterinarian because I’ve always loved animals, but I’m glad I didn’t go down that path because I’m not sure I could handle the life and death decisions required on a daily basis.”

Although Cindy wasn’t brought up around racehorses, she did own a horse when she was young.

“My dad bought a horse for each of his three children: me, my younger brother, and older sister, trying to help a difficult cultural wake-up call when we moved to a rural base in Louisiana. I basically lived on a horse for the three years we were there, so I’ve always loved horses.

“When we re-located to the D.C. area, we had to sell the horses and it was Kentucky that gave me my ‘horse fix’ when I transferred there my last two years of college.

“But it was Steve and his family that introduced me to the business. Steve was working for his brothers at the Red Mile and I graduated from the university with a teaching degree in Special Education. We used to talk for hours about how Steve longed for a farm of his own and to be his own boss. Although we liked the track — the farm was our thing.

“Steve was the youngest son in a large family where all the other brothers were already involved in the business. That time taught us a lot about being patient, diplomatic, and believing in yourself — even when others told you that you couldn’t do it.

“That’s one of the reasons we came up with the name for the farm: Hunterton. Hunter is Steve’s middle name, but it’s also his mom’s maiden name and a nod from the family member that was most in his corner.”

“In 1982, Steve and I got married and lived off my teaching salary for the first few years until the business started taking off. Once it began making money, we pooled my salary and started taking trips. At the time, Sweden was buying almost every trotting stallion they could and sending them overseas. Steve and I would take trips to every horse farm talking to as many people as we could.

“In 1985 we had our first child, a daughter named Liz, and in 1989 I gave birth to our son, Taylor. When I had the children, I stopped teaching and split my time between raising the kids and the farm.

“Our daughter Liz always loved horses and today has her own horse business as a professional three-day-event rider who trains, rides, competes, and teaches in Pennsylvania.

“When she was 5-years-old Liz said she wanted to ride horses when she grew up and today is living the dream and is exceptional at it. She’s an amazing horsewoman in her own right and it’s too bad we couldn’t talk her into driving them for she would’ve be the trainer to beat!

“Our son Taylor is also an excellent horseman, but he kept growing taller. At 6’ 5” the basketball coaches discovered him and he developed into a fantastic player. He was recruited out of high school by the United States Air Force Academy and started all four years for them. He graduated with an engineering degree and is now a pilot for the Air Force.

SOME OF THE CHAMPIONS

“We’ve always had favorite babies and mares at the farm. Some favorite mares have been Hustler’s Best, who is the dam of Run The Table. We really loved that colt for he was big, beautiful, and incredibly smart.

“And there was Pizza Dolce, who was the sweetest mare ever, Emilie Cas El and Southwind Serena.

“Favorite horses we raised are Run The Table, Galleria, Nuclear Siren (I cried when we sold him), Forbidden Trade, Rock N Roll Heaven, Mission Brief (who is back at the farm and new staff favorite), Tactical Landing (my heart horse for sure), Trixton (a big prankster), and Venerate (always class).

“As for the babies, we usually raise 150 plus yearlings. Quite a few of them are not sold as yearlings, like Party Girl Hill, which we bred and raised for our client Tom Hill. We also consign some yearlings we didn’t raise, such as Tall Dark Stranger, who we sold for longtime client Jim Avritt.

“All the yearlings we own go to the sales.”

Cindy and Steve also own a couple of horses being trained by Linda Toscano and Chris Beaver.

“People keep asking us how much longer we intend to keep running a large operation. The answer is, ‘As long as we can,’ because after 40 years at Hunterton Farm, it’s still fun. And our son, Taylor, informed us that after his commitment is up with the Academy in two years, he will be coming back to the farm with his wife and first child, to help carry on the business — and anyone that knows Taylor knows he will do an excellent job.

“When I was young there was no way I could have imagined the life I would have. I love my work and don’t think there is a better lifestyle in the world. I wake up every morning on a beautiful farm, work with a partner I adore, and am surrounded by beautiful horses. There is no better life.”