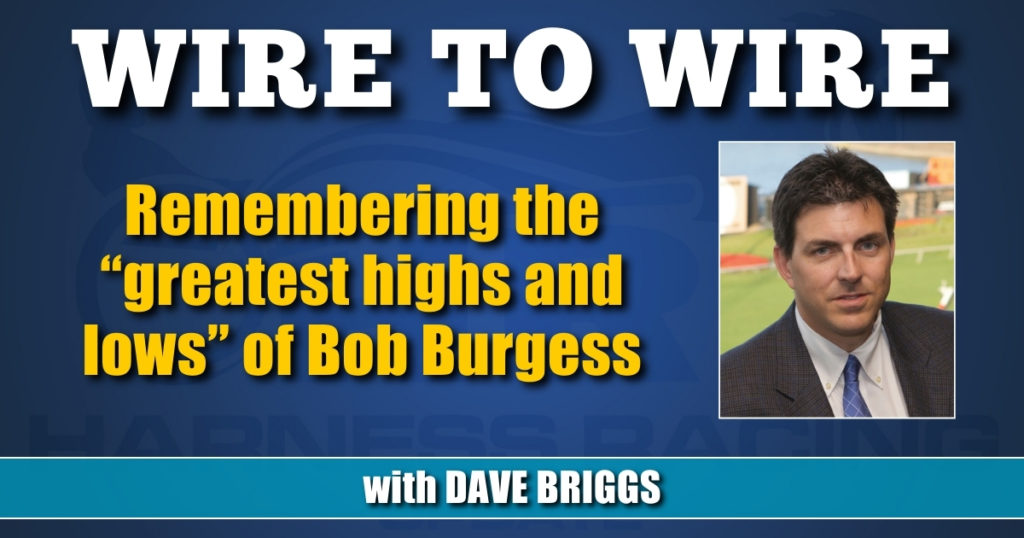 Remembering the “greatest highs and lows” of Bob Burgess

My favorite memory of Bob Burgess came after Amigo Hall won the Hambletonian in 2003. You need to understand the context.

Burgess, a 2011 inductee to the Canadian Horse Racing Hall of Fame who died Saturday (April 3) at the age of 85, owned the trotter with his daughter-in-law Karin and the colt’s breeder, Walnut Hall. The fact Amigo Hall is a son of Balanced Image that was trained by Bob’s son and Karin’s husband, Blair Burgess, was even better.

Bob, a proud Canadian who was instrumental in founding the Ontario Sires Stakes (OSS) program with people such as Lloyd Chisholm, Dr. Glen Brown and others, was also the man most responsible for bringing Balanced Image to stand in Ontario, thus changing the Canadian breed.

After the colt won, I went hunting through the old Meadowlands grandstand to find Bob in one of the track’s many dining rooms to congratulate him and get some comments for my story. The first thing he said when I shook his hand was, “The horse should never have been 27-1… The odds were the craziest odds I’ve ever seen. I thought he’d be 8-1 or 10-1.”

That was quintessential Bob Burgess, a man with a unique world view to match his considerable passion for harness racing.

I was laughing about just that memory with Blair the other night while picking his brain to try to craft a proper remembrance of his father, who was laid to rest Thursday (April 8) after a small service.

“It was about getting enough respect,” Blair said of his father’s first reaction to winning the sport’s greatest trotting prize. “That’s a Canadian inferiority complex… and that might be a horse owner’s disease. A lot of horse owners are like that.”

Bob Burgess did just about everything in the industry except drive horses, but he mostly maintained the perspective of a horse owner that Blair said was both a blessing and a curse.

“You likely can’t get too Shakespearean, but in some ways, some people would consider him a tragic character. So much opportunity and skill, but the ego of horse ownership and its intoxicating aspects cost him dearly at times,” said Blair, who asked for an honest appraisal of his father.

“Everybody is great after they die,” Blair said. “He certainly had his enemies, certainly pissed some people off along the way and he experienced… the greatest highs and the greatest lows.”

The highs for Robert ‘Bob’ Burgess, Queen’s Counsel (an honorary title of used to recognize Canadian lawyers for exceptional merit and contribution to the legal profession), were the aforementioned Balanced Image, OSS program, Amigo Hall and berths in the Canadian Hall of Fame for both himself and Blair, who is also in the Living Hall of Fame in the U.S.

“Winning the Hambletonian with (Amigo Hall), a Canadian bred that was a son of Balanced Image, I think was especially sweet,” Blair said. “(And) he was always proud of the Sires Stakes program.”

Balanced Image, a 2000 inductee to the Canadian Horse Racing Hall of Fame, produced more winners than any trotting stallion in history, including those two Hambletonian champions. His progeny earned more than $105 million.

Bob’s lows in the game included the provincial government pulling the plug on the Slots at Racetracks Program (SARP) in 2012, the financial problems that caused him to lose his Cantario stallion farm where Balanced Image first stood in Ontario and a long involvement with the standardbred breeders’ lawsuit against the province seeking damages for ending SARP. That suit has dragged on for eight years and is still not fully resolved. Blair said his father was the sixth or seventh plaintiff to have died since the lawsuit was first filed.

“There’s been several times when he’s had to put on the dog and pony show to try and regroup and come back again,” Blair said of his father. “He did live on the edge. In the end, maybe it even hastened his demise, because he was definitely overwrought on the breeders’ lawsuit, way overwrought on that.”

“He watched horses train at my place on Friday. He watched horses train at Anthony (MacDonald’s) on Saturday,” Blair said. “He took his car to the shop on Saturday afternoon to get a tire fixed and then died Saturday night around supper, after he went for a short walk… He probably didn’t recognize some signs… If he checked himself into a hospital on Friday afternoon or Saturday morning, he’d probably still be with us. He probably had a massive embolism or something, because he had these mobility issues the last five or six years.”

A thorough — and, according to Blair — accurate accounting of Bob’s involvement in the business was compiled by Standardbred Canada this week and can be read here.

Further to that, Blair told me his father bred horses, occasionally foaled them and long held a trainer’s license.

“He never let it go, he always was an ‘owner/trainer’ on his license. He kept it up his whole life, as far as I know. I don’t think he ever had a start as a trainer, but he did have a trainer’s license,” Blair said.

“When I was a kid, we’d foal mares together, too. He foaled mares himself on the farm. Other than drive a horse, I think he did just about everything in the horse business.

“He helped me a lot. When I set out on my own in the mid-‘90s, he rode shotgun or drove me all over to all these tracks all over America, racing horses for Brittany Farms and really not for him. He wanted to make sure that things went in the right direction for me, and he certainly helped me there.”

Blair said he and his father also had a complicated relationship that went beyond the typical challenges of fathers and sons to also encompass a boss-employee dynamic.

“He would be livid if I wasn’t current on a topic to the level he expected, and I think later in life I purposely aggravated him with ignorance. He also knew how to make one feel guilty: for staying up too late, coming to work too late, having what he considered frivolous endeavors or concerns. But he was certainly my ‘go to’ on pedigree of the horses. He’d call me on conformation, but I still trusted him to look at horses for me as sort of an advance man. I said he was active in all parts of game and up to a few years ago he would often volunteer to even ship horses for me, and I would take him up on it if second trainers or I were too busy.”

Bob also had a large family. He and his first wife, the late Vera Burgess, had five children and the clan now counts 17 grandchildren and two great-grandchildren. Bob leaves behind his second wife, Heather, whom Blair calls “a life saver” for his father over the last decade.

As a lawyer, Bob was proud of his Q.C. title and for the countless equine cases he argued, many on behalf of those in the industry that couldn’t navigate bureaucracy themselves.

“He was director of Contrans trucking company for a long time. He was one of the original shareholders there,” Blair said. “He also did the legal work for (Canadian rock band) The Stampeders way back when he was a young lawyer… They weren’t BTO, but they were hot for a while. He went to the Junos with them. He did some cool stuff when he was a young lawyer. He was a young, city lawyer for 30 years before this horse stuff. In hindsight, I almost wish he’d kept on that trajectory and maybe done the horses more on the side, because in some ways the horses wore him out,” Blair said.

“He was hardcore, avid reader, not of novels, but he’d be reading autobiographies and historical stuff. He was a polymath on that kind of material. For a while, because of all that stuff, he traded his own account on the market… It was another fortune won and lost, but he did extremely well for a while in the early 2000s just trading his own account at home… In the summertime, he would golf four or five times a week… and cherished his ClubLink membership.

“There was more to him than horses.”

Indeed, but horses were rarely far away.

On that score, Bob Burgess had more than his share of both glory and failures, but there’s no denying there was a richness to both his life and his contribution.