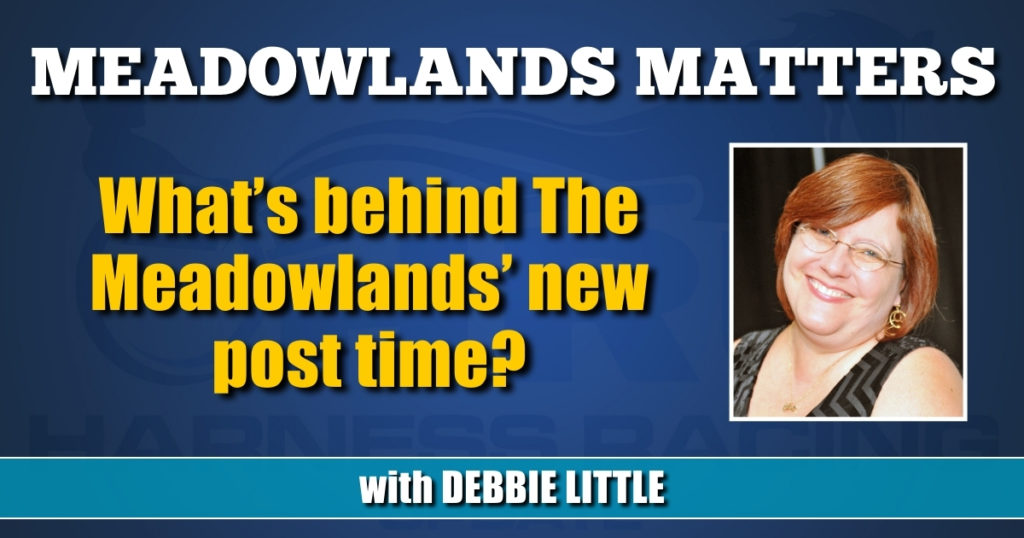 Track CEO and GM Jason Settlemoir explains why The Big M will now have a first-race post time of 6:20 p.m.

Tonight, The Meadowlands is debuting its new 6:20 p.m. post time.

Why not go back to 7:15 p.m.? Or just stay at 6 p.m.? Apparently, nothing that The Meadowlands does is arbitrary and a lot of thought went into choosing this new starting time, even though it’s only a 20-minute change.

“We found that the wagering on those last couple of races went up compared to when we were wrapping up around midnight before,” said track chief operating officer and general manager, Jason Settlemoir.

So why change at all?

“Moving to 6:20 allows California to be able to add a race or two more of ours,” said Settlemoir. “On Friday nights, they’re taking six through 13. On Saturday nights, they’re taking five through 13. By moving to 6:20, we’ll be able to get them to take at least one more of our races. I think the customers, trainers, drivers and grooms are all appreciative of starting earlier so they can get home and get in bed an hour earlier.

“We have always messed around with post time moving it forward and moving it backwards. At the end of the day, when you watch the handle, we’ve made some very good moves when it comes down to post-time adjustments.”

Settlemoir makes sure that any post-time change is released at least 10 days in advance so everyone is aware, especially when the post time moves back as it did at the end of 2020. Under his watch, the races will never unexpectedly shift to an earlier post time.

“I tell them out there in Delaware [Ohio] every year at the Little Brown Jug (LBJ). If post time says 11 a.m., don’t say to me we’re going to race at 10:30 in the morning, because I’m going to lay in the middle of the track,” said Settlemoir, the society director, simulcast director and second announcer of the LBJ. “We’re not going anywhere until 11 o’clock.”

For The Meadowlands, 6:20 p.m. appears to be the best of both worlds where their product is better bet and everyone still gets home earlier.

For Big M drivers that also compete at Harrah’s Philadelphia, the earlier post could prove challenging since the driving time between the two tracks is about an hour and 45 minutes.

“You’re not going to be able to stay the whole day, so it’s going to be a little tougher,” said Hall of Famer David Miller. “In my profession, you hate to pass up drives, so you want to try and make the best of your opportunities.”

For Andy McCarthy, there’s no question that he’d choose to drive at The Meadowlands, but on stakes days, it might be a little complicated.

“The Meadowlands is the pinnacle and if they think it’s going to suit them to have a 6:20 p.m. post to make racing better at The Meadowlands, you’ve just got to pick one place,” said McCarthy. “Obviously, I’m going to pick The Meadowlands over Harrah’s.

“There’s going to be a few tricky days in the summer, like Adios Day [at The Meadows, Pa.]. It’s always a bit of a squeeze to try and fit both tracks in. Obviously, we want to race in the Adios final and then make it back for all the eliminations for the good races on Hambo weekend. Even with the 7:15 post, it made it quite a squeeze to get back for the early races.”

Last year, the Adios Final went off at about 4:20 p.m. and allowing at least two hours of travel time in a best-case scenario, would make being on time for the first race at the Big M impossible. However, these drivers deal with this all the time during stakes season, including tonight, when several are competing at Yonkers in the Blue Chip Matchmaker pacing series, meaning those racing at Yonkers will only be in the last few races this evening at The Meadowlands.

At this time, there’s no way to know whether the post-time change will have a positive or negative effect on the handle, but one thing that is certain is that even though people may be staying home or going home earlier, they definitely still love betting on The Meadowlands product.

In 2021, there have been 21 race cards, 15 of which have seen wagering of at least $3 million, which includes all 11 Saturday night cards.

During all of 2020, they bet over $3 million on 11 occasions, so they’ve already exceeded last year’s numbers with 69 race cards remaining this year.

“During 2020, other than Meadowlands Pace and Hambletonian weekends, there was only one $7-million weekend – June 19-20 – and it took us 36 races to get there.”

Today is also the first day that the track can have 50 per cent patron capacity, up from 35 per cent.

“Watching this whole thing unfold in front of me, and I’m very, very much a news buff, the [Governor Phil] Murphy administration has handled this extremely well,” said Settlemoir. “In my opinion, I think that New Jersey has handled this better than any other state and Murphy has stayed out of the big headlines and the limelight. So, I’m really appreciative of what the Murphy administration did. They did what they needed to do and kept focused on what was best for the people in the State of New Jersey.”

Settlemoir is also appreciative of the work done by his own staff throughout the pandemic, especially the track’s nurse Fran Guthrie, Dr. Angelo Chinnici and assistant general manager Marianne Rotella.

“I’m really happy with the entire staff here at The Meadowlands and the New Jersey Sports and Exposition Authority that works with us very closely, headed by Vinny Prieto,” said Settlemoir. “Coming up [this] week is March Madness, so we have mandatory testing for all of our employees – whether you’ve been fully vaccinated or not – and whether you’ve had COVID or not.

“With God’s grace and a little bit of luck, hopefully things will get back to normal here pretty quickly sometime in the second quarter, probably the latter part or the beginning part of the third quarter.”