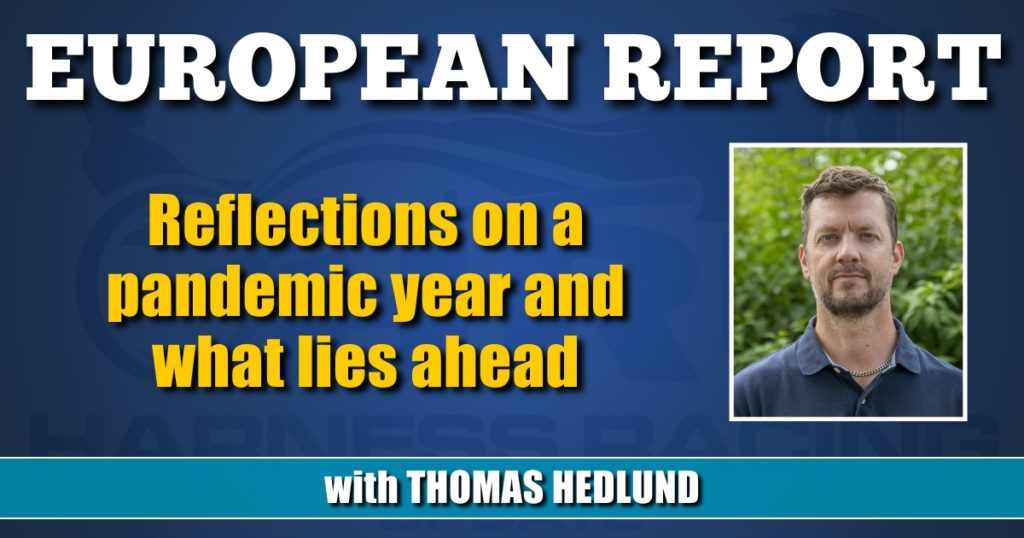 Reflections on a pandemic year and what lies ahead

A year has passed since all arenas were shut down in Europe due to the pandemic.

Unlike many businesses connected to the world of sports, harness racing has managed relatively well during COVID-19, but what is missing most is the social contact.

Wednesday (March 17) was one of my few visits to a racetrack since March 20 of last year. It would be a lie to say that I didn’t see any other races live during the entire season last year, but generally, it’s been a year between my visits and that has been very uncommon in my life.

Solvalla was empty on Wednesday night. The grandstand and public area seemed like a ghost town where the big windows of the facades that run along the home stretch were barren. Even the stable area was unusually empty.

Thomas Hedlund | The backstretch at Solvalla looks like a ghost town.

The sight was a bit frightening, but we’ve also been very spoiled with outstanding television productions from the tracks throughout the years and the media’s role has been so much more significant during the last 12 months. In Sweden, and several other European countries, harness racing can be watched on television or via live stream basically every day, which is great for all the fans that are interested in the sport, but it’s a tough task for media and especially TV media to connect people to the sport, to the horses and all the feelings that follow when you visit a racetrack, via the screen.

The pandemic not only has kept potential owners, breeders, caretakers and other actives away from direct contact with the world of harness racing, all the people that made their weekly social contacts at the tracks have been pushed aside for a year now. One must ask: will they ever find their way back to the track?

Anders Malmrot is Solvalla’s sports director and I briefly chatted with him. He said the tracks’ situation is unusual and that the past year has been ”special”.

The Elitloppet is just some two months ahead and it seems like the event will be as empty as last year, with zero audience.

”But that’s what it is. The worst thing for us in this pandemic is knowing that the people who always come to Solvalla now don’t get the opportunities to visit us,” Malmrot said. “We try to call some of our regular visitors, try to involve them in podcasts and things like that, but it’s a tough situation we all are in right now.”

The horses trot like before, the drivers and trainers are all doing their jobs and the bettors don’t seem to have lost interest in the sport. What it will look like when the gates re-open? No one knows. Let’s just hope that harness racing, as a public sport, has survived.

Yet, I choose to be optimistic.

A good friend of mine said to me,” You love music. Won’t you go to concerts again when society reopens?”

He is so right. The people will be back.

Vivid Wise As on repeat

The mile race contained some really interesting trotters, but when French favorite Davidson du Pont went off stride in the first turn, the excitement of the race disappeared. Vivid Wise As was sent for the lead when the car left the field, but Tamure Roc opened even more quickly and could take the lead, at least for the first 600 meters. At that point, Gocciadoro once again pushed the button and sent Vivid Wise As to the front, a position from where the 7-year-old Yankee Glide son rarely loses a race.

Gocciadoro didn’t have to make any big movements behind his horse and Vivid Wise As pretty much cruised to safe win by a head in 1:52.4, ahead of great finisher Delia du Pommereux and Bahia Quesnot.

Vivid Wise As likes the track of Cagnes-sur-Mer. Four starts have resulted in four wins and this was his second consecutive triumph in Criterium de Vitesse.

Italian top driver Enrico Bellei has dominated the sport in his home country for many years and on Wednesday (March 17) he noted his 10,000th career win in the sulky.

Only two other drivers have reached the milestone 10,000 victories in Europe — Germany’s Heinz Wewering and Finland’s Jorma Kontio.

The 57-year-old Enrico Bellei started his driving career in 1982 and he claimed his first win the same year.