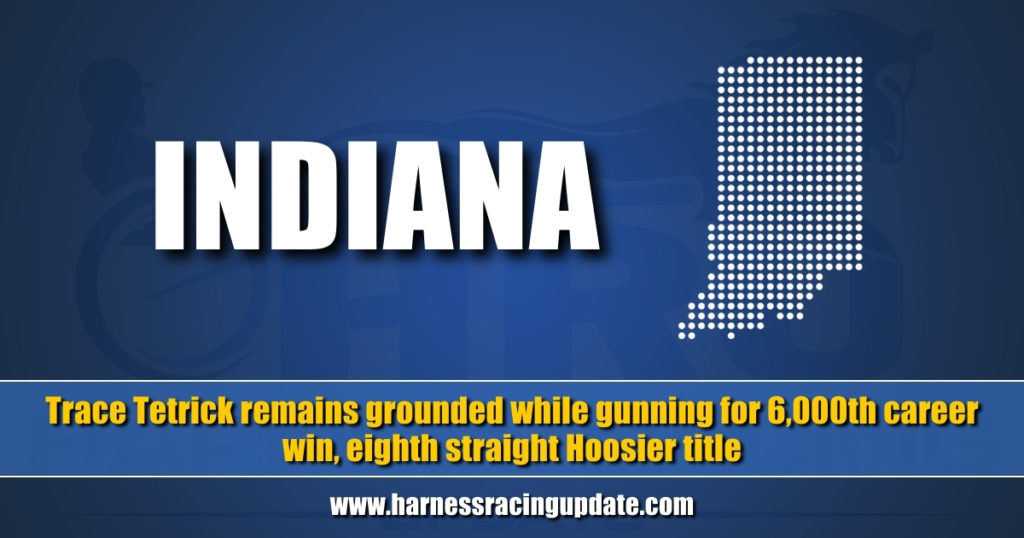 Harrah’s Hoosier Park will open its 2021 in two weeks and its nine-time leading driver — and current North American money leader — will be ready.

In racing, timing and opportunity can mean everything when striving for success. Harrah’s Hoosier Park will raise the curtain on its 2021 harness meet in two weeks, and Trace Tetrick is poised to defend his leading driver title. Recently, Tetrick recalled a last-minute opportunity on opening night in 2006 that led to one of his early victories over the Anderson, IN oval. Steering second-choice D W for trainer Dan Perdue, the then 19-year-old claimed the first race of the meet with a 1:56.3 effort.

In the 15 years that have followed, Tetrick has put in a lot of work to become one of the top reinsmen in the Midwest, but has also benefited from placing himself in the right place at the right time. Currently, he is leading all North American drivers in purse earnings, topping the $1 million mark earlier this week. He ranks second to Aaron Merriman in wins (149-119 through Friday) this year, and is leading the standings at Miami Valley with a cushion of just over 30 wins.

“Fortunately, I’ve been really busy so far, and I’ve had a lot of success,” he said. “I’ve been able to drive some good horses in the right spots, lately. A lot of things have been working out in my favor, which is a good thing.”

When Hoosier Park opens March 26, Tetrick will be aiming to add his 10th leading driver title at the track. He earned his first in 2008, and has finished atop the standings in Indiana in each of the last seven seasons. Despite the success, Tetrick remains grounded. When asked about defending his title in 2021, the driver pointed toward those important opportunities.

“If you don’t get listed, you don’t have the opportunity to win or be in the race to make money for your clients,” Tetrick said. “That’s my main job, to get listed and make money with those opportunities that we have for everyone involved.”

Over the last six seasons, the 34-year-old has averaged more than 470 trips to the winner’s circle and in excess of $4.8 million in purses annually. Last year, his 436 wins during a pandemic-shortened campaign ranked him fifth in North America, and he finished 11th in purse earnings with $4,825,094. Heading into Saturday’s (March 13) races, Tetrick is 128 wins shy of the 6,000-win milestone. With those lofty totals, the Illinois native turned Anderson resident approaches each day with a simple goal.

In a few short weeks, Tetrick will look to maintain his advantage at Miami Valley while defending his title at Hoosier Park. With Hoosier’s schedule of two-day weeks to start before expanding to three days for several weeks, he plans to take advantage of the opportunities in both states.

“I’ll probably cut out Friday and Saturday at Miami Valley to race at home those days. I’ll still be able to race three days a week at Miami Valley,” he said. “When we add the days, they are dark on Wednesday and Thursday in Ohio.”

The time at home is more valuable than ever. Tetrick and his wife, Sandy, welcomed daughter Chloe into the world in May, 2019. When he is away from the track, he relishes the opportunity to spend time with his wife and soon-to-be 2-year-old.

“It’s been really good. She changes a little bit every day,” Tetrick said of his daughter. “She’s still learning new things. Watching her develop and change has been really exciting.”